Outreach is adding more fuel to the fire with a $65 million funding round led by Spark Capital.

It’s a big venture round for a enterprise software company which almost didn’t survive its initial incarnation and was initially passed over by many in the venture capital community.

That’s no longer the case.

Outreach will use the fresh cash to grow its sales automation platform now used by more than 2,400 sales teams and 22,000 users across the world. In 2017, the company doubled its customer count and saw revenue grow by more than 100 percent. It now employs 245 people with plans to reach 325 by the end of 2018 across offices in Seattle, San Francisco, and Tampa Bay.

Outreach uses machine learning to help customers like Cloudera, Adobe, Microsoft, DocuSign, and others automate and streamline communication with sales prospects. It offers one system to track all touch points, from phone calls to emails to LinkedIn messages. The software integrates with existing tools like Salesforce and Gmail. 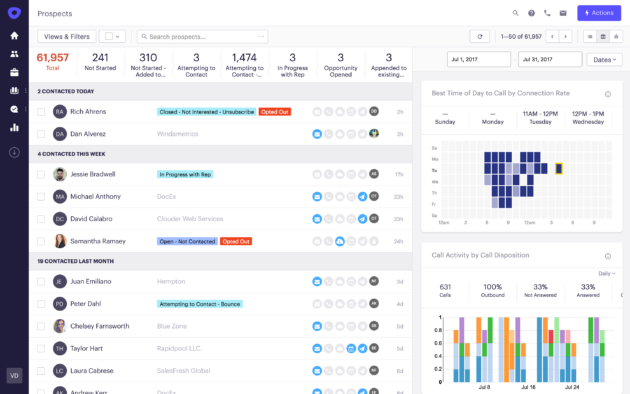 The company tracks sales statistics, helps teams collaborate and sends automated alerts to make sure prospective buyers don’t slip through the cracks. The idea is to increase the volume of sales meetings and create a more efficient workflow for salespeople.

A ‘punch in the gut’: Fast-growing Seattle startup eyes Bellevue after tax vote

Outreach CEO and co-founder Manny Medina said the company plans to double its revenue over the next two years, but didn’t reveal specific numbers. He explained that Outreach has created a new category for sales teams, giving them a one-stop shop that houses both account data and process tools. More than 75 percent of Outreach customers use the product daily.

“Now salespeople have a place to live,” Medina said.

Medina, a former director at Microsoft, originally launched a recruiting software startup called GroupTalent in 2011 with his co-founders Andrew Kinzer, Gordon Hempton, and Wes Hather. But the entrepreneurs pivoted in 2014 to focus on building tools for salespeople.

Outreach plans to expand its platform to “every customer-facing role.” It recently announced Amplify, a new sales automation program, and hired former Microsoft data scientist Pavel Dmitriev as its new vice president of data science. Competitors include InsideSales, Intercom, Pipedrive, and others.

“Outreach has been instrumental in creating and evolving the customer engagement category, which is growing at an exponential rate,” Megan Quinn, Spark Capital general partner, said in a statement. “Outreach’s technology, approach and leadership team make it poised to capture this multi-billion dollar opportunity and we are excited to have the company as part of our portfolio.”

Editor’s note: This story was updated with comments from Medina.