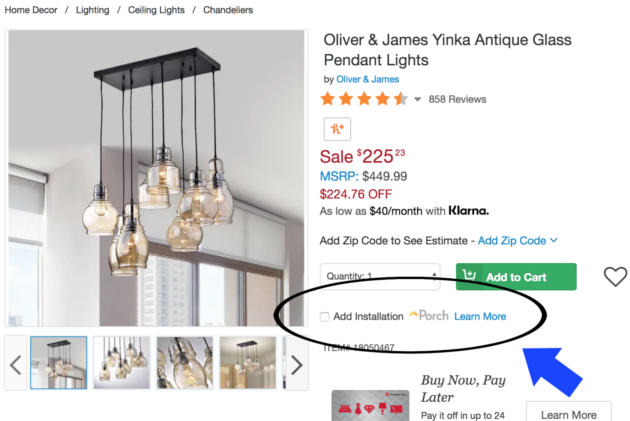 Porch announced a partnership with Overstock.com on Tuesday as it continues to expand the reach of its home services marketplace.

The Seattle company is teaming up with the e-commerce giant to offer shoppers a way to hire a home professional to install or assemble products purchased on Overstock.

After adding installation or assembly services at checkout, Overstock customers can connect with the Porch Home Assistant, an AI-powered feature that uses job request data to match with a local professional. Customers pay for the service on Porch.

The partnership is a way for both companies to compete against the likes of Amazon, which battles Overstock in the e-commerce industry and with Porch in home services. Amazon launched Amazon Home Services in 2015.

“The bottom line is that competition is fierce for retailers these days, and it’s imperative that everyone is thinking innovatively about how to stay ahead,” Porch CEO Matt Ehrlichman said in a statement. “It is clear that customers want services along with the products they purchase so that they can have their task completed without hassle and headache.”

The deal is similar to the one IKEA inked with on-demand labor marketplace TaskRabbit; IKEA later acquired TaskRabbit.

Founded in 2013, Porch went through major layoffs in 2015 and 2016. But the company has bounced back and is growing faster than ever. It has helped facilitate more than two million projects in the last year and counts more than 300,000 professionals on its platform.

Porch has partnership with other large retailers like Walmart, Lowe’s, and Pottery Barn. It inked deals with Facebook and Streem this year.

Overstock has seen its stock price drop from $84 per share to $30 this week. Amazon has been rumored as a potential acquirer. Overstock has transitioned from an e-commerce retailer to a “cryptocurrency superstar.”