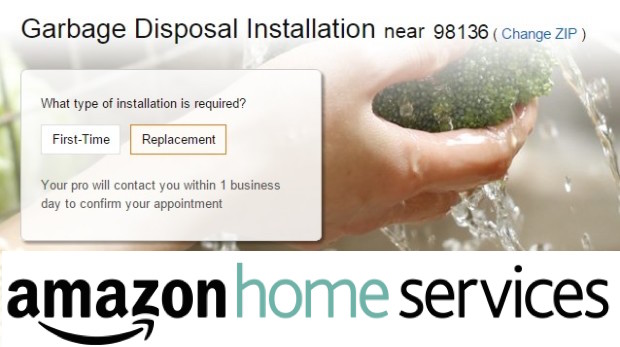 Amazon.com customers are able to buy water heaters or TV wall mounts online, but now Amazon can also help them find someone to install and service items in their home.

Starting today, after months of speculation, Amazon is finally unveiling what it’s calling Amazon Home Services — a major new category for the company, which until this point has been focused on selling only physical and digital products.

In an interview with GeekWire, Peter Faricy, Amazon’s Marketplace vice president, said the services business could eventually be as massive as those two other core categories for the company. 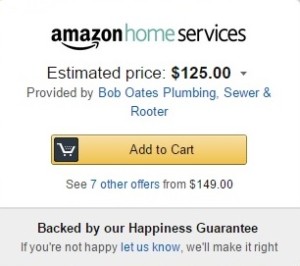 Amazon has been quietly piloting home services for years on a small scale, as reported by GeekWire as far back as December 2012. But today’s launch marks the beginning of a national rollout. From Amazon’s main drop-down menu, customers will be able to click on the Amazon Home Services link, where they can browse, purchase and schedule professional services, ranging from installing a new garbage disposal to hanging a new light fixture.

Other services include housecleaning, yoga, guitar lessons, or things as crazy as renting goats for grazing overgrown yards.

And, finally, one other notable difference is that Amazon will also stand by the work being conducted, through something it is calling the “Happiness Guarantee.” The guarantee promises that if customers are not satisfied at the end of a project, Amazon will ensure the job gets done right or provide a refund.

Amazon Home Services is now available across the country in key U.S. markets, with a large number of providers in New York City, Los Angeles, San Francisco and Seattle. It’s aiming to be live with the same level of coverage in 30 cities later this year.

From the cloud to the home

Some Amazon customers may find it hard to wrap their minds around the fact that Amazon is not just for physical and digital goods anymore, but for services, too.

When shopping on Amazon, it’s easy to consider Amazon a behemoth that only operates in the cloud. Oftentimes, all customers see is the box that arrives at our doorstep with a smiley face on the side. Now, it will have a more human side, starting with a phone number or email address of a local service provider.

Because of all of the services Amazon is offering — from estimates to guarantees — Amazon is not necessarily competing with Yelp or Angie’s List, but with a whole host of other startups that are trying to transform an industry that has long been considered blue collar. The idea is to make home services as high-tech as hailing cabs and delivering meals have become.

At least two other Seattle-area companies have similar ambitions.

One is Porch.com, which has amassed large amounts of home-improvement data and has a partnership with Lowe’s to introduce shoppers to contractors in their area. There’s also Pro.com, which is headquartered just blocks away from Amazon, and is coincidentally backed, in part, by Amazon’s CEO Jeff Bezos’ personal investment fund. Another company dabbling in the space is Denver-based HomeAdvisor, which has 900 employees and is a subsidiary of IAC, the large tech conglomerate that previously owned Urbanspoon.

Amazon’s Faricy said they’ve partnered with a handful of companies to help with today’s roll-out.

So far, customers are loving Amazon’s services based on reviews. The so-called “pros” on the network are averaging a rating of 4.7 stars out of five.

But there’s still some very obvious kinks in the system, including how pros will be provide estimates online for projects and how they will be able to absorb the hefty commissions Amazon is demanding to gain access to 100 million U.S. customers.

Before Amazon Home Services officially launched, I was able to try out the site, not knowing that a launch was happening today. Upon submitting a request for a painter, all three responses I received by email required the professional to visit my home. Not one was willing to provide an estimate online, without first seeing the project in person.

Faricy said that should be a rare occurrence.

“Our goal is to make that instance you named very, very small as you go forward,” he said. “Our goal is for you to see the complete service that they would provide and the price upfront for every single service.”

However, that approach seems all wrong to Jeff Dupont, the owner of Sound Painting Solutions in Seattle, who has been beta testing the platform for a couple of months. Even though he considers himself an early adopter of technology, Dupont said he’s got to touch and feel things before saying how much they will cost.

“I refuse to bid,” he said. “I’m third generation. I’ve been in business a long time. If I paint walls, I got to touch them. Dry wall is going to take twice as much paint, for instance. For me, that’s why I have a hard time bidding like that. It’s just not meant to be.”

He also pointed to the human interaction with a customer that is so important when trying to win over a client’s trust and their business.

Amazon’s business model — and big commissions it is seeking — could also put a wrench in Amazon’s plans.

What’s nice is that Amazon will handle all the billing and processing, so that a customer pays online, and never has to deal with bills or writing checks. But that, and all of the perks mentioned above, come at a steep price for the contractor.

Amazon is charging anywhere from 15 to 20 percent of the final project’s price.

Dupont, who said the platform has been free for him to use during the trial period, said a 15 to 20 percent cut would be too much. He estimates most painter’s margins are close to 35 percent. He’s willing to spend 5 percent of his annual revenues on marketing, which today includes advertising on Angie’s List and Houzz, a home improvement social network.

If he paid Amazon 20 percent off the top, he would have to raise prices, and then he would no longer be competitive if customers received bids from contractors they found through other means.

None of the pricing for home services given out on the web can be accurate because it leaves out the most important factor, TIME.
Rodney Jessen, the owner of OutToday.com of Bellevue, Wash., echoed the opinion that these high-tech home improvement companies are detached from a contractor’s way of doing business.

Prior to founding OutToday.com, Jessen was a contractor for 30 years. Now, he’s the founder of a startup that promises to get you a plumber or electrician to your house within 24 hours. His model is simple: He charges the customer a $79 service fee and the contractor pays a $79 referral fee. After that, the contractor is free to charge the customer what they feel is appropriate for the work.

He argues that the online estimates offered by Pro.com, Amazon and others confuse the marketplace. For instance, he said a customer recently told him on a service call that she saw a $149 quote on the Internet for fixing her water tank’s drain valve.

“Obviously she had been on one of the home improvement sites that give out estimated repair prices,” he said, in an email. “None of the pricing for home services given out on the web can be accurate because it leaves out the most important factor, TIME.” He added that the quote was about right for a plumber, “who works out of his garage,” and shows up when he can. However, he said, “same-day pricing for that job would have been around $300.”

Those on-the-ground realities raise questions about Amazon’s move to apply algorithms to home improvement. But with the company’s reach and history of building giant new businesses, Amazon’s move into home services will be difficult for the industry to ignore.