DocuSign’s long reign atop the GeekWire 200 ranking of the top Pacific Northwest startups is over.

The digital signature giant vacated its number one spot after graduating from our list of privately held tech companies, with a successful debut on Wall Street Friday. Also gone from the list is fourth-ranked Smartsheet, which went public on the same day, making for a busy Friday at GeekWire HQ.

So who’s No. 1 now? Avalara, the Seattle-based sales tax automation technology company. See more on them below, along with the rest of the new top five, including two companies from Portland, Ore.

Also graduating from the list: Marketing technology company Bizible, which announced its acquisition by Marketo this morning.

GeekWire 200: The top privately held tech companies in Seattle and the Pacific NW

With the exception of a single month last summer, when Redfin held the top spot before going public, the dynastic DocuSign has lorded over the GeekWire 200 since late 2014. DocuSign is not technically based in the Pacific Northwest, but it was founded in Seattle before moving to San Francisco, and its biggest office remains in the Emerald City, so we count it as one of our own.

DocuSign sold 21.7 million shares of stock in its IPO for a total of more than $629 million — though the company received no proceeds from approximately 5.6 million shares sold by existing stockholders at a value of approximately $162 million. That is the second biggest tech IPO of the year, behind only Dropbox, according to data supplied to GeekWire by PitchBook, and almost eclipses the value of all Pacific Northwest IPOs in 2017 at a combined $690 million. Smartsheet’s deal was the biggest Northwest tech IPO since Juno Therapeutics in 2014, which raised $264 million, per PitchBook data.

DocuSign, Dropbox and Smartsheet all have one major thing in common: they all fall under the large umbrella of enterprise software. There has been a wave of interest in enterprise software companies recently, and these IPOs are yet another example. 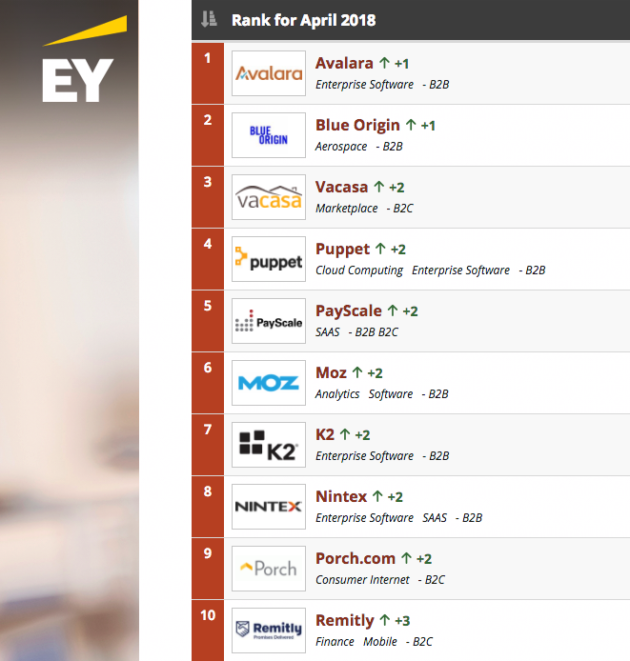 These developments are interesting for a whole host of reasons, but most specifically because we at GeekWire called them, to a point.

In our 2018 preview, GeekWire co-founder John Cook and startups reporter Taylor Soper had DocuSign and Smartsheet coming off the board this year, though they pointed toward acquisitions as the mostly exit vehicle, so they only get half points. Meanwhile, GeekWire’s other co-founder Todd Bishop offered the exciting prediction that interest in enterprise software startups will continue this year, and DocuSign and Smartsheet’s successful IPOs certainly bear that one out.

I’m not surprised because Cook and Bishop have about 75 years of collective experience covering tech, so it’s best to listen when they speak up. Soper, though quite younger, has been at GeekWire covering startups since almost the beginning, coming on board at the approximate age of 12, I believe. Oops, I may have those two numbers backwards.

I am so far 0-for-3 in my predictions that Avalara, OfferUp and Rover would all go public in 2018. But there’s still time! Make me proud folks.

So who’s next at the top following the departures of DocuSign and Smartsheet? Here are is a look at the brand new top five of the GeekWire 200.

#1 Avalara: The new number one on our list just finished moving into a new headquarters building in Seattle, the first time it has had all its Seattle-area employees under one roof in a decade. Today, 400 out of the company’s 1,400 global employees work out of the office, but the space has room for more than 700.

The sales tax automation company has nearly $395 million over its lifespan, according to PitchBook data, including a $96 million round in 2016. That investment brought the company’s valuation over $1 billion, per PitchBook.

#2 Blue Origin: Boot-rockin’ Jeff Bezos‘ space venture is coming off an important milestone this weekend when it sent its New Shepard suborbital spaceship on its highest-ever round trip to space. Someday paying passengers — including tourists as well as researchers — will be able to come aboard the autonomously piloted spaceship. But Blue Origin hasn’t yet set a ticket price or taken customer reservations for those crewed flights.

Blue Origin is taking a slower approach to spaceflight development than that pursued by Elon Musk’s SpaceX. But the approach is no less steady: Bezos is devoting billions of dollars’ worth of his personal riches to Blue Origin, mostly by selling off Amazon stock, in line with his vision of having millions of people living and working in space.

#3 Vacasa: The highest ranked startup out of the Rose City is Vacasa, which in the last few months reeled in a $103.5 million funding round and announced plans to double its office space in Portland. The vacation rental management company plans to grow its 320-person Portland workforce by another 100 employees this year and its new office space will have room for up to 675 people.

Vacasa is competing with some big names in the realm of tech-powered short-term rentals, such Airbnb, which is valued at $31 billion, and HomeAway, which was acquired by Expedia for $3.9 billion in 2015. Vacasa, which has now raised $143.5 million in its lifetime, per PitchBook, stands out from the competition by helping homeowners manage the entire booking process from start-to-finish through a fleet of “field-based” personnel in local markets — housekeepers, reservations agents, local managers, etc.

#4 Puppet: Despite laying off approximately 3 percent of its workforce earlier this month, or approximately 20 people, the Portland-based startup remains entrenched in the top five. Puppet is also diversifying its product strategy, focusing on an expanded portfolio of DevOps products as newer software development technologies like containers and serverless computing challenge the company’s tools to build software faster.

Puppet, which has raised a combined $108 million in debt and venture funding, according to PitchBook, boasts a strong network of partners including Microsoft, Amazon and Google. The 574-person company, according to LinkedIn headcount, counts 40,000 companies, including 75 percent of the Fortune 100 as customers.

#5 PayScale: In this competitive job market, the right offer is key to landing a top candidate. That’s what PayScale tries to solve as a provider of compensation software.

Founded in 2002, the company has a LinkedIn employee count of 469. It last took on money in July 2017, when it received a minority investment from Mercer, a New York-based consulting company, of an un-disclosed amount. As part of the investment deal, the two companies formed a strategic alliance to help create new compensation data software solutions.

Here are some of the other big risers in April:

Five startups made their debut on the GeekWire 200 or returned to the list in April. They are: Snap! Raise, StormX, Inc., RealWear, Pixvana and Summit Imaging.