Last week we wrapped up a wild year for the Pacific Northwest’s top startups. Now it’s time to look ahead and see what’s on the horizon for the GeekWire 200, our ranking of the region’s top privately held technology companies.

GEEKWIRE 200: The top privately held tech companies in Seattle and the Pacific NW

The GeekWire staff has come up with a set of bold predictions for GeekWire 200 companies in the new year. They range from key milestones, to acquisitions and IPOs, to rising and sagging industries.

We’ve gathered a fair amount of expertise covering these companies over the years, but keep in mind, these are just educated guesses. That said, here are predictions directly from GeekWire’s reporters and editors for GeekWire 200 companies and trends in 2018.

John Cook: It’s time for a new number one atop the GeekWire 200. And 2018 will mark the year it happens.

DocuSign — the electronic signature pioneer that splits operations between Seattle and San Francisco — will finally hand over the reins on its #1 status on the GeekWire 200 as it either sells out or goes public in 2018. (Only independent privately-held companies are listed on the GeekWire 200).

DocuSign has a new CEO at the helm in Daniel Springer, who previously served as CEO of Responsys, which sold to Oracle in 2013 for $1.6 billion.

Founded in 2003 by Tom Gonser, DocuSign could go public or find a buyer, the latter being the more likely scenario. Typically, venture capital investors don’t like to wait 15 years or more for their payday, and so at some point, they’ll ask to see a return.

The question remains: Which company will sign the (electronic) check to buy DocuSign? Salesforce? Adobe? Oracle? IBM? Or someone else? — John Cook 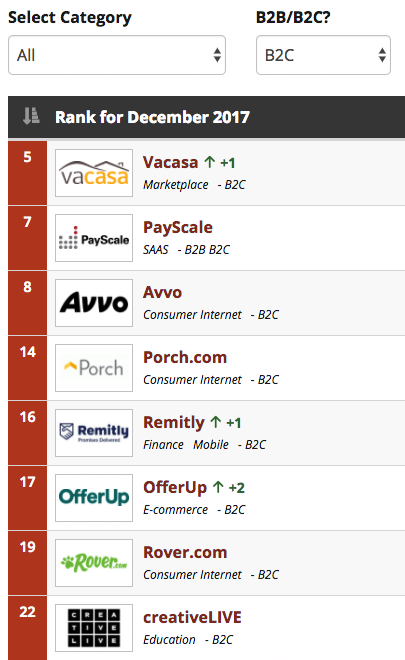 Todd Bishop: Here’s a little-known GeekWire 200 trend: the number of pure consumer startups in the top 200 has been declining steadily over the past few years, as the Seattle region’s enterprise startups have gained momentum in areas including cloud computing, artificial intelligence and business-oriented software as a service.

After looking at the companies on the cusp of breaking into the GeekWire 200, here’s my prediction for 2018: this trend will continue. Several companies likely to make their debut or return to the list in the coming months are also business-to-business startups, including Algorithmia, Entomo and others.

You could debate whether this trend is good or bad, but it’s clear that startups in the Seattle region and the Pacific Northwest are getting more and more entrenched in enterprise technology. — Todd Bishop

Alan Boyle: If I were a prudent gambler, I’d be betting that #3 Blue Origin would take a pass on flying passengers to outer space by the end of 2018. After all, the company’s under no pressure to deliver for shareholders, since it’s privately held by Amazon billionaire Jeff Bezos. The only financial pressure he’d feel is to reduce the space venture’s billion-dollar burn rate, and that’s no biggie, considering that his net worth is in the vicinity of $100 billion.

What’s more, rocket science is stereotypically hard, and development timelines reliably slip to the right. Like most other spaceflight companies, Blue Origin says “we will fly humans when we’re ready, and not a moment sooner.”

All that being said, this month’s return to uncrewed flight testing signals that Blue Origin is ramping up for the next phase. The fact that Virgin Galactic and SpaceX are also gearing up for a big year could get Bezos’ competitive juices flowing. So I’m going to eschew prudence and predict that Blue Origin’s first flesh-and-blood flier — an in-house tester rather than a paying customer — will get off the ground (but not necessarily to outer space) by the end of 2018.

See what I did there?

Monica Nickelsburg: Remitly capped off several years of strong, steady growth with a whopping $115 million in new funding in October, the biggest investment round in the Pacific Northwest since OfferUp raised $120 million in mid-2016. That cash is on top of a $38 million round in September, a separate $38.5 million round in 2016, and a $12 million line of credit from Silicon Valley Bank in September 2015.

The 16th ranked company on the GeekWire 200 could be profitable but is instead choosing to invest in growth, preparing for a big expansion in 2018. The mobile money transfer startup will use the fresh cash to expand to more countries and grow its 400-person employee base across four offices worldwide. Customers sent nearly $4 billion with Remitly this year, up from $1.5 billion last year.

With the fresh cash and big appetite for growth, I predict Remitly will become the Seattle area’s highest-valued startup in 2018, though it will be a long climb. That title is currently held by OfferUp, valued at $1.29B, according to PitchBook. Remitly’s valuation after the latest funding round is $465M. Remitly will have to overtake a handful of startups, including Avalara and Smartsheet, to ascend to the No. 1 spot.

Health Sciences Reporter Clare McGrane: The number of health companies in the top 50 will double

Clare McGrane: The GeekWire 200 has been unforgiving for health companies this year. Almost every company in healthcare and life sciences dropped down the ranking and those industries claim only three companies in the top 50. Despite that, I’m predicting a comeback for the industry in the next year and I foresee three new health companies joining the top 50.

In the coming year, healthcare companies will benefit from increased consumer awareness and demand for tech solutions that help people get healthy. Those forces will help personalized medicine company Arivale break into the top 50. It was was one of the few companies to rise in the rankings this year, from spot 52 to 51. The same forces will help propel medical app creator MedBridge into the top 50, from its current position at 62.

The third company is still in stealth mode: Silverback Therapeutics. The biotech startup hasn’t revealed what it’s working on, but it is probably related to cutting-edge cancer immunotherapies. The company has quietly raised $20 million and has poached talent from immunotherapy leaders Juno Therapeutics and Seattle Genetics, including recruiting the longtime Seattle Genetics COO to be its new CEO. The company is making moves that indicate it will soon come out of stealth mode, potentially setting the stage to be a huge player in Seattle’s biotech scene in 2018.

That being said, Seattle has struggled to find a breakout success in health and life sciences for several years. Juno Therapeutics, which is nearing commercialization of its first cancer immunotherapy, is the closest the city has come to having a superstar on the scale of its technology giants. The interest of Microsoft, Google, Amazon and other tech giants in pushing into health could also reshape the industry in unexpected ways. One thing is for sure — it’s going to be an interesting year for health companies. 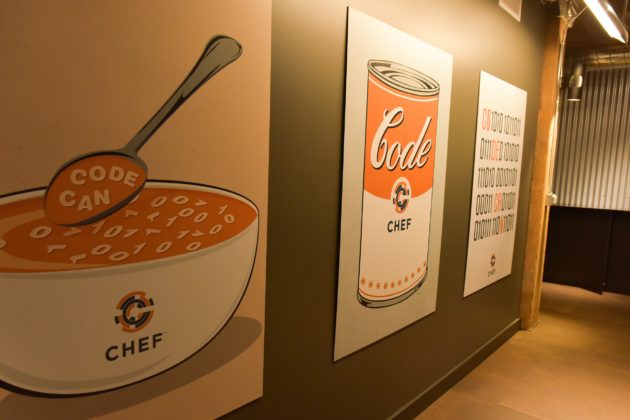 Tom Krazit: One of the Pacific Northwest’s DevOps companies on the GeekWire 200 — either #6 Puppet or #15 Chef — will be acquired by a larger enterprise computing player in 2018. Over the last decade, both companies have helped hundreds of organizations automate a lot of the drudgery that used to accompany the software development process, and have raised hundreds of millions in venture-capital funding to build sustainable and growing enterprise computing businesses around open-source projects.

That is a very difficult thing to do. With the rise of containers and Kubernetes, there are now lots of different ways to deploy modern cloud-native software across multiple environments. And as companies with legacy infrastructure get ready to modernize, they have lots of choices across managed services vendors large and small that can help them refine their infrastructure.

Each company is thought to be on a path to $100 million in revenue, yet it’s not at all clear whether they remain in the fast lane to growth: Chef completely overhauled its technical and sales leadership in 2017, a year after Puppet did something similar. Both companies have talked about IPOs, but there would be no shame in joining forces with a rival like Red Hat or filling out holes at a cloud underdog like IBM, Cisco, or Oracle if high-octane growth is no longer in the cards.

Its project management software platform seems like an attractive target for a company like Microsoft or Google.

Nat Levy: There were plenty of expectations for a year full of Seattle tech IPOs heading into 2017, but Redfin was the only GeekWire 200 startup to go public last year. It was joined by Everett, Wash. figure maker Funko, which is a different kind of geeky company and not a GeekWire 200 startup. Not counting Funko, only four Seattle area tech and biotech companies have gone public since 2015.

I say 2018 will back that trend, with at least three Seattle area tech powerhouses going public. Avalara and Rover have both hinted at IPO ambitions in the past, and both have brought in some major cash in recent years.

OfferUp raised a massive $119 million funding round last year, pushing its valuation above $1 billion, and later added another $11 million. Its headcount is soaring, so much so that it scooped a new headquarters space that is four times the size of its current digs. It has also added some big names to its leadership and board.

OfferUp has global ambitions, but it also faces tons of competition from established players like Cragislist and new entries like Facebook market place. Going public would provide OfferUp another cash infusion to take down the competition.

One hurdle could be trust in the app. OfferUp has been adding new features to assuage safety concerns, and upping trust from users would put the company in better position to gain trust from investors in an IPO.

If you value resources like these, be sure to check out our list and map of out-of-town tech companies with Seattle engineering outposts as well as our list of startup incubators, co-working spaces and accelerators in the region, and our GeekWork job board.

Check out the full GeekWire 200 index and read our 2017 year-end wrapup.