“He had a great ride,” Bezos said tonight in a tweet.

The uncrewed, straight-up, straight-down trip was conducted at Blue Origin’s testing ground in West Texas. The video that Bezos included with his tweet showed the New Shepard blasting off and rising above a wide-open spread of ranchland.

The company’s fact sheet said the flight lasted a total of 10 minutes and 6 seconds, starting at 10:59 a.m. CT (8:59 a.m. PT). The booster went nearly three times the speed of sound on the way up (Mach 2.94) and even faster on the way down (Mach 3.74). The capsule’s maximum altitude was listed as 99.39 kilometers, just shy of the internationally accepted 100-kilometer boundary of outer space.

“Today’s flight of New Shepard was a tremendous success,” Blue Origin CEO Bob Smith said in the fact sheet. “It marks the inaugural flight of our next-generation crew capsule as we continue step-by-step progress in our test flight program.”

Between November 2015 and October 2016, Blue Origin put an earlier version of the New Shepard through five successful flights to the edge of space and back. Then that spacecraft was retired, and the company’s team in Kent, Wash., turned its focus to building a version of the crew capsule that’s closer to what passengers would eventually be riding. For example, the updated version has actual windows rather than painted-on facsimiles.

If the current series of flight tests goes well, Blue Origin could start taking people up on suborbital space rides as early as next year. The company isn’t yet taking reservations or publishing its ticket prices. Would-be riders will have to wait until the tests are complete. But Bezos’ video included a teaser in big letters at the end: “Ready to fly?”

New Shepard is designed to fly up to six passengers autonomously. During flight, the crew capsule separates from a booster that’s powered by Blue Origin’s hydrogen-fueled BE-3 rocket engine. The capsule drifts down to the ground on the end of a parachute, while the booster is programmed to relight its engine and fly itself back down separately to a controlled landing.

Today the booster’s landing legs touched down smoothly at a velocity of 6.75 mph, while the capsule was going a mere 1 mph when it hit the dirt, Blue Origin said. 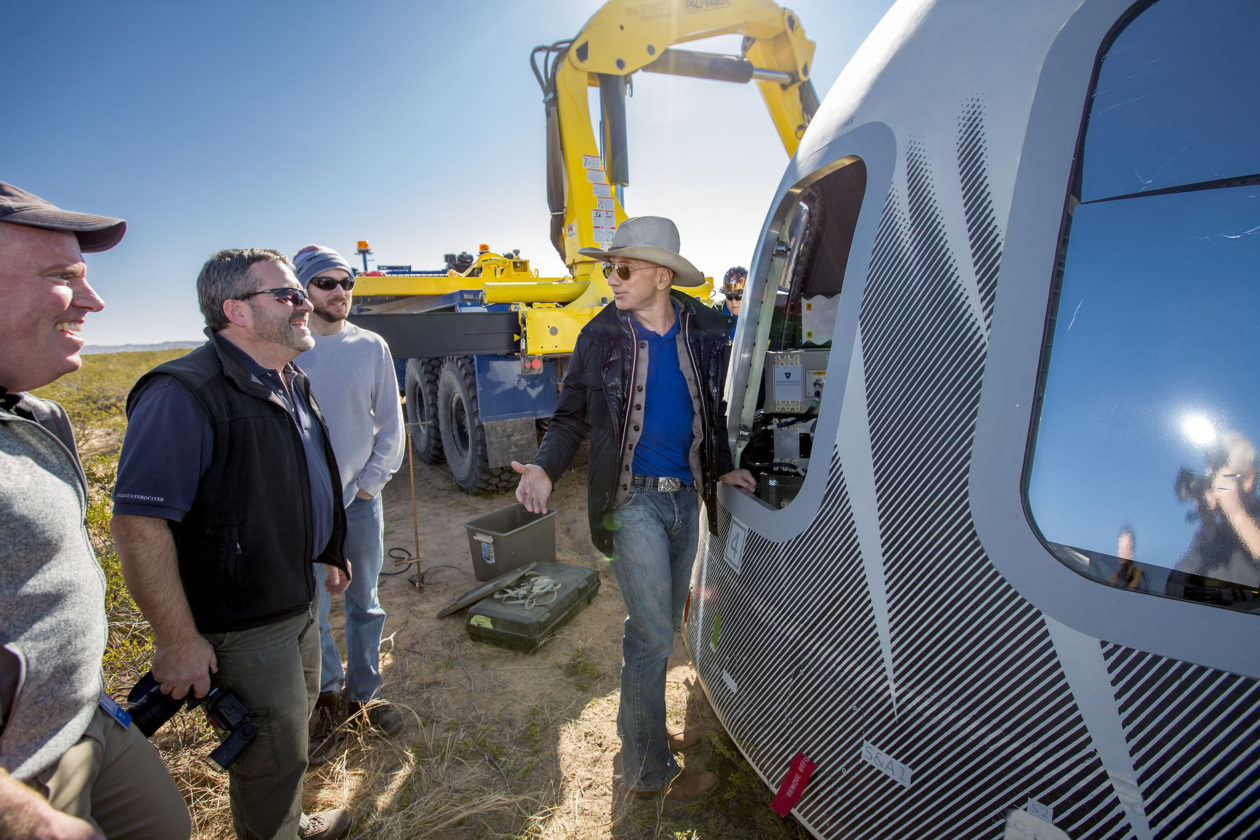 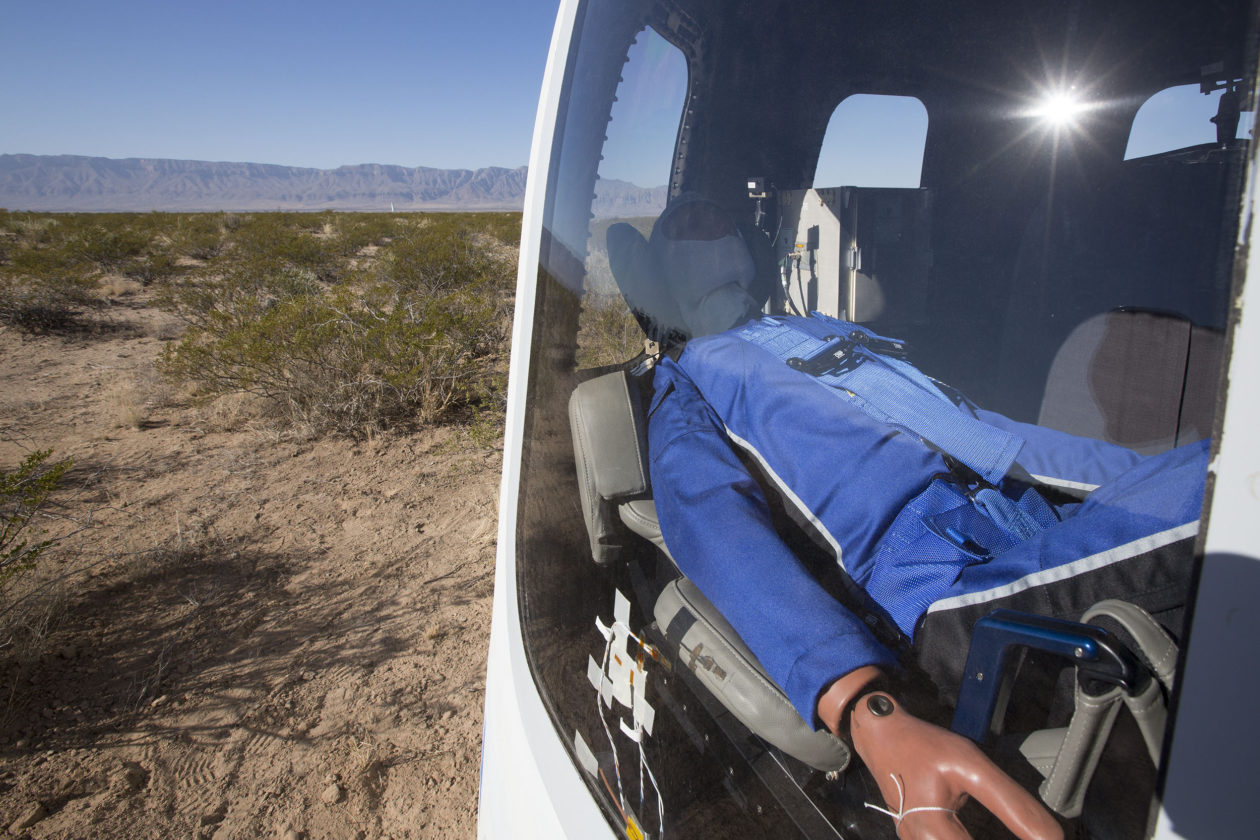 An instrumented test dummy, nicknamed “Mannequin Skywalker,” sits next to one of the huge windows in the New Shepard crew capsule. (Blue Origin Photo) 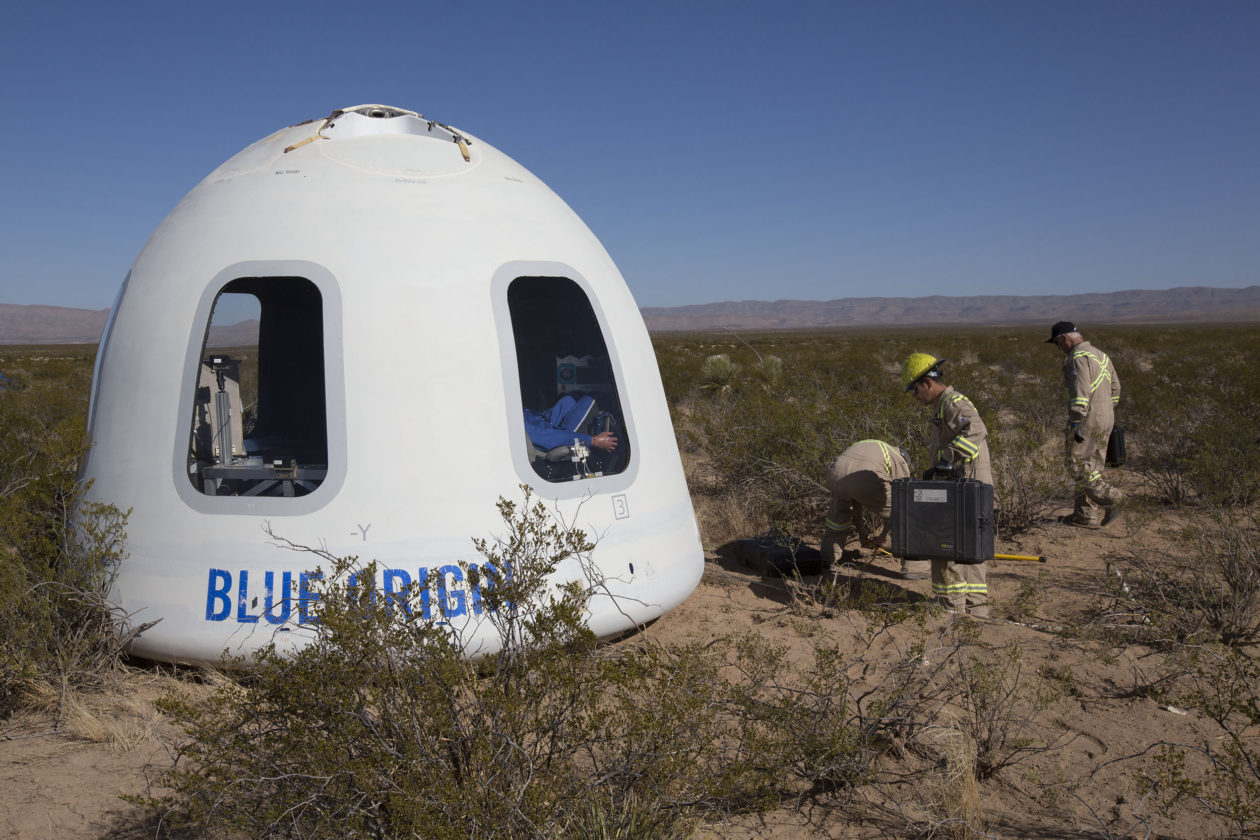 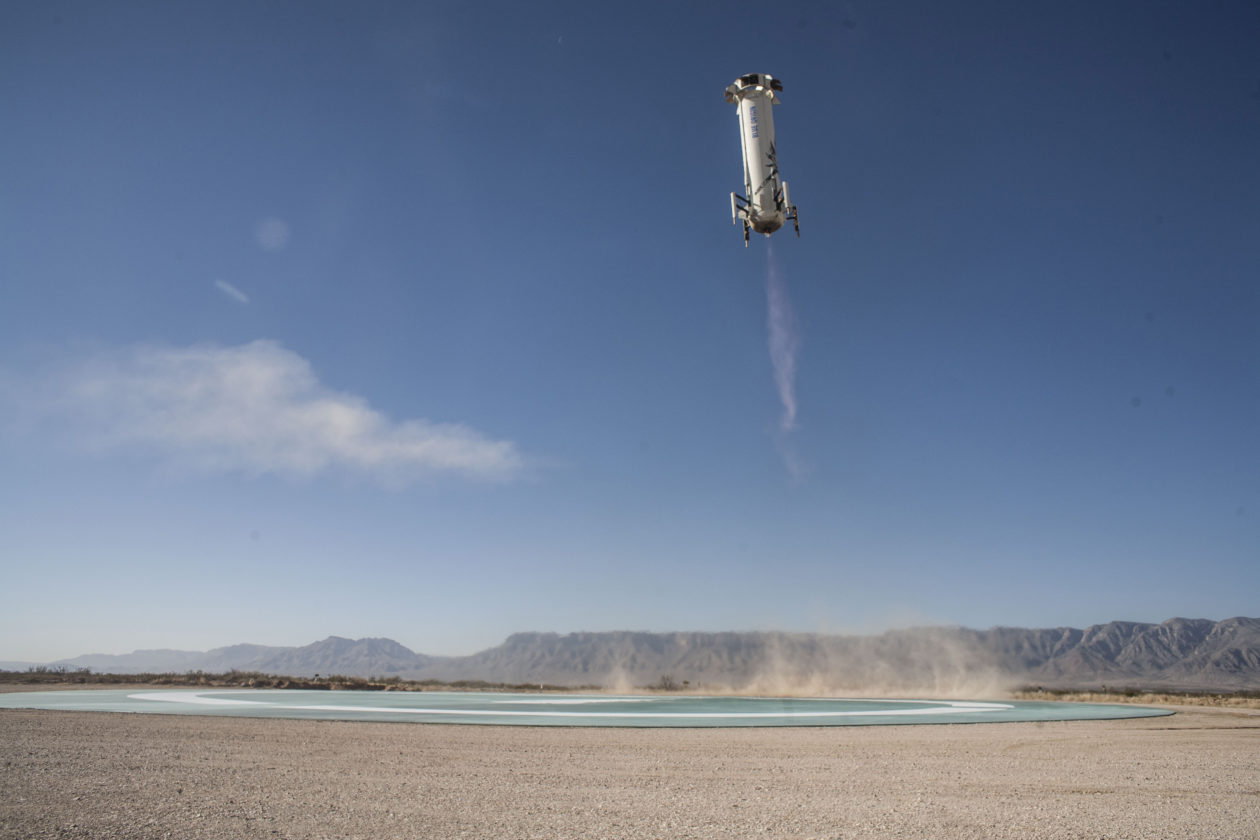 Blue Origin’s New Shepard booster hovers over the landing pad as it gets set for touchdown. (Blue Origin Photo) 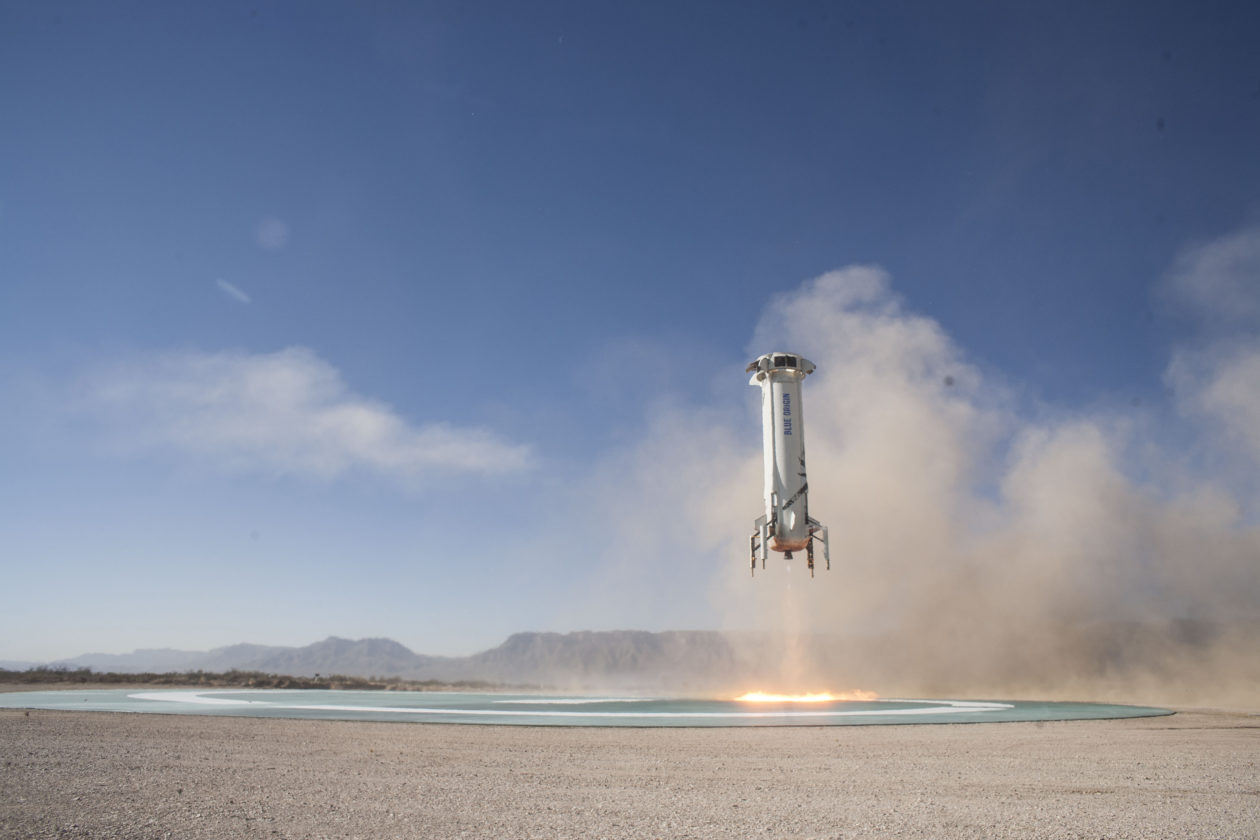 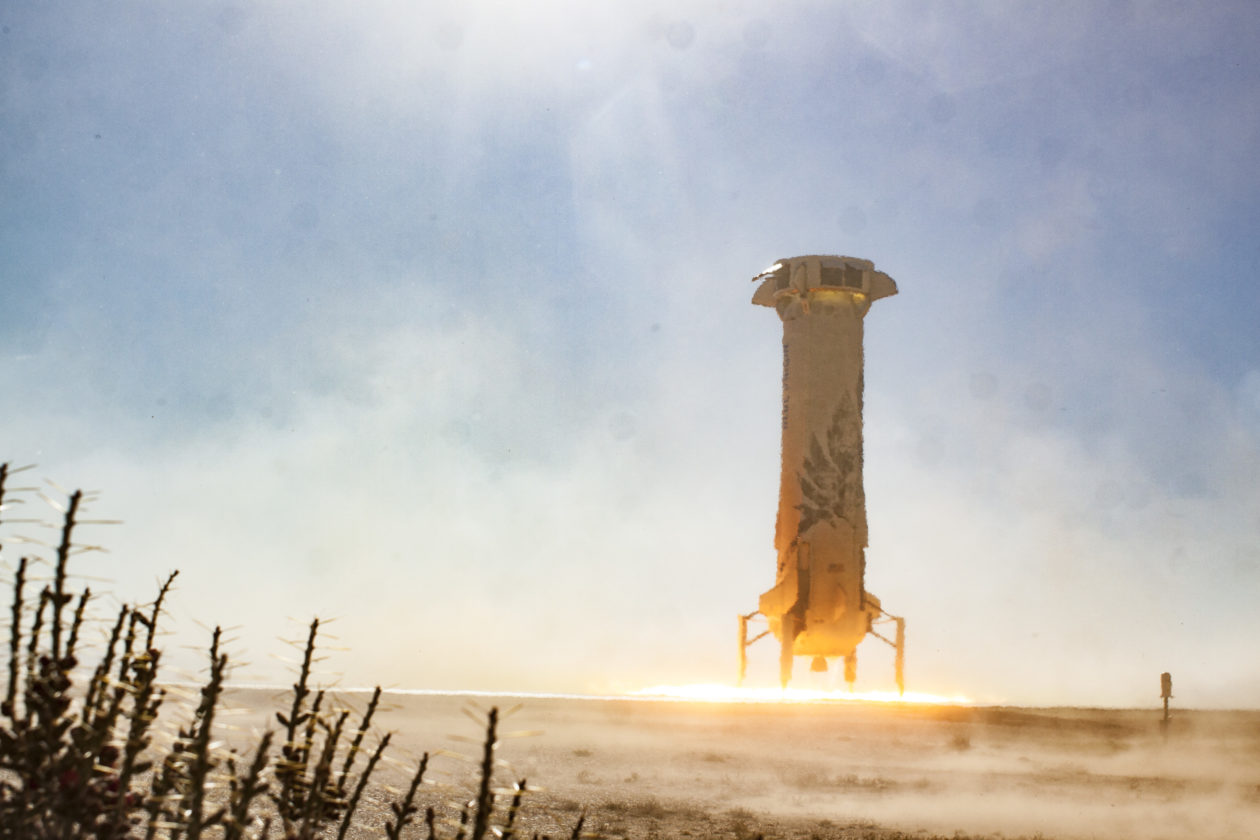 Bezos founded Blue Origin in 2000 with the aim of having millions of people living and working in space. Last year, he told reporters that he sells about a billion dollars worth of Amazon stock annually to support the venture, and he has joked that the reason he founded Amazon was to earn the money to fund his space ambitions.

Bezos’ current estimated net worth is $99 billion, making him the world’s richest person, according to Bloomberg.

In addition to its suborbital space program, Blue Origin is working on a next-generation BE-4 rocket engine and an orbital-class rocket called New Glenn. Just as New Shepard is named after NASA’s first astronaut in space, Alan Shepard, New Glenn is named after the first American in orbit, John Glenn.

New Shepard is produced at Blue Origin’s headquarters in Kent, but New Glenn will be built at a 750,000-square-foot facility that’s nearing completion in Florida. That rocket’s first test launch is due to take place by 2020.

Blue Origin is also working on a lunar delivery system nicknamed Blue Moon, which may figure in NASA’s updated plans to send humans to the lunar surface. In May, Bezos said Blue Moon could facilitate building “a permanent human settlement on one of the poles of the moon.”

Hat tip to NASASpaceflight.com and its forum members. The original version of this report was published at 10:55 a.m. PT Dec. 12.