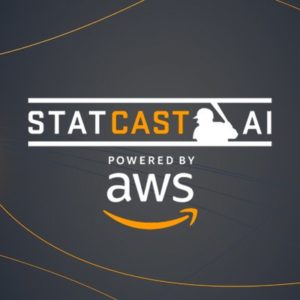 Deeper stats, predicted pitches, and live commentary produced by robots in the voice of iconic announcers — it could all be coming to Major League Baseball broadcasts soon.

MLB re-upped its partnership with Amazon Web Services on Tuesday. It will continue using machine learning and artificial intelligence to gather data and provide more information to fans.

MLB and AWS, the cloud computing arm of Amazon that posted $5.4 billion in revenue last quarter, have worked together since 2014. Amazon helps power Statcast, the high-tech player tracking system that measures every play during a baseball game and produces stats like pitching velocity, launch angles of home runs, acceleration of base runners, and more.

MLB will further develop Statcast and roll out new stat categories, with an aim to create more personalized viewing experiences based on where a fan is watching. It will also attempt to automate scorekeeping and other game notes.

But perhaps more intriguing is the plan to use Amazon’s technology — specifically Amazon SageMaker — to predict pitches by analyzing the pitcher, batter, catcher, and situation.

MLB also wants to use SageMaker and Amazon Comprehend to “build a language model that would create analysis for live games in the tone and style of iconic announcers to capture that distinct broadcast essence baseball fans know and revere,” according to a press release. AWS announced a few new services for SageMaker that will allow users to bring their own machine-learning models to the ballpark while still taking advantage of SageMaker’s performance.

We’ve followed up to learn more about what exactly this means — should play-by-play announcers be worried about job displacement? Will fans be able to watch games with commentary from legendary broadcasters like Vin Scully?

Judging by the response to the idea of using robotic umpires during games, virtual commentators could be cool to some but may not go over so well with the baseball purists.

Partnering with MLB is a strategic marketing move from Amazon, which inked a similar deal with the NFL in November. Its branding shows up during live game broadcasts and in MLB promotions — you may see some during today’s All-Star Game.

Other cloud computing giants are inking sports-related partnerships, too. Google teamed up with the NCAA for a cloud deal in December. Microsoft, which signed a huge marketing deal with the NFL in 2013 — it’s why you see Surface tablets on the sidelines — uses its Azure technology for the company’s Sports Performance Platform.

AWS has a substantial market share lead in the cloud infrastructure market, but Microsoft and Google have slightly closed the gap in recent quarters.