Much like how technology has changed the way you communicate with friends, family, and co-workers, it has also revolutionized how NFL players and coaches talk to each other and strategize on the sidelines.

At last month’s Seahawks vs. 49ers game at CenturyLink Field, GeekWire got a sneak peek at the latest geeky tools that the NFL has implemented to ultimately help teams win games.

We spoke with NFL executives and gameday crew to learn how the league changed the way it uses radio frequencies to eliminate interference on headsets. We also met with Microsoft to get an update on its partnership with the NFL that includes the use of Surface tablets by both teams and this year, referees.

By now you’ve probably seen coaches and players huddled around a blue tablet after a given series. The device is a custom-built Microsoft Surface Pro 4 tablet, which first appeared on sidelines in 2014 after the tech giant inked a big sponsorship deal with the NFL worth a reported $400 million.

While Microsoft encountered some early hiccups with both the functionality and labeling of its tablets, the device has now become a mainstay on the sidelines, replacing the old black-and-white printed paper that teams previously used to review past plays. Each team has access to about 15 tablets that are brought out on the field well before kickoff for testing. 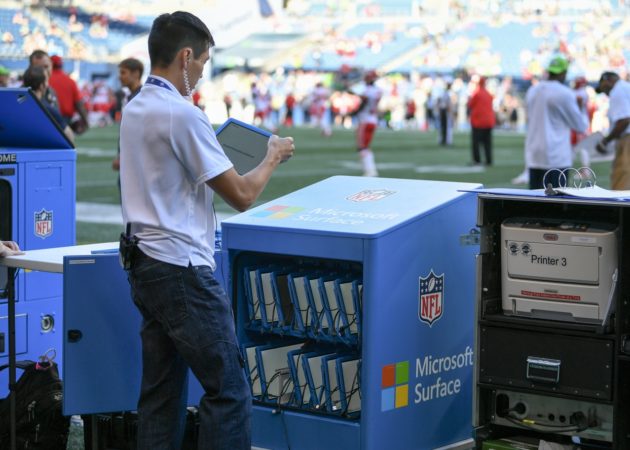 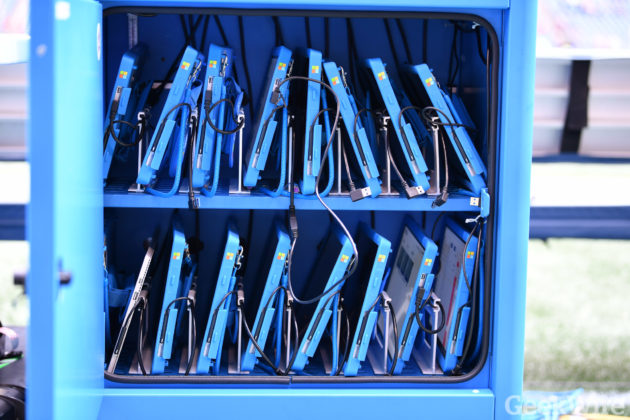 Over the past four seasons, Microsoft has improved the functionality of the device and streamlined the process of how players and coaches view game footage. The software now lets teams create individual profiles for coaches that provide easy access to specific types of past plays. For example, the “defense” profile will surface all defense-related plays, while a “punt return” profile will do the same for punt-related plays. 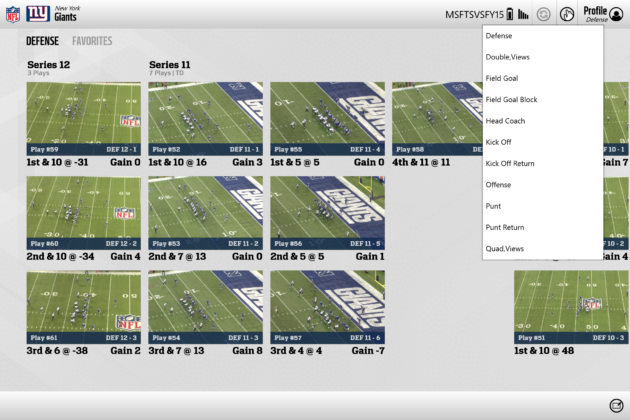 Still images with a bird’s-eye view are captured by a camera in the coaches booth and sent to the tablets in real-time thanks to a private WiFi network built specifically for the Surface devices. Teams can also take the tablets with them into the locker room during halftime.

“They aren’t waiting for paper or a binder,” noted James Bernstrom, director of product marketing at Microsoft.

Each image can be tagged and annotated by coaches. Those edits show up immediately — for example, if a coach in the booth makes a note on one tablet, that shows up in near real-time on a separate tablet being used by a player on the sideline.

“It offers a level of collaboration that is pretty amazing,” Bernstrom noted.

Players and coaches can also zoom in and out of each screenshot, or see four different images at the same time. 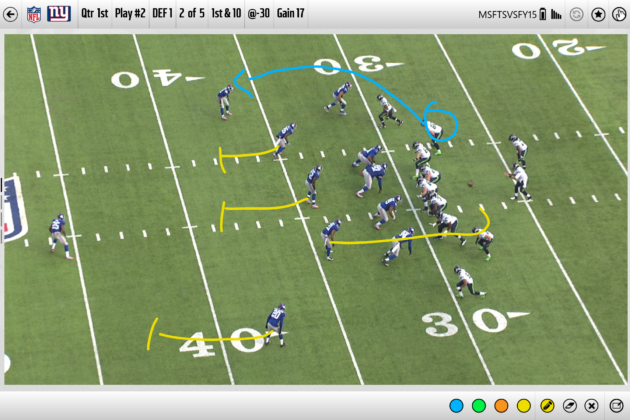 The tablets themselves are custom-built to withstand extreme temperatures and force. They are waterproof and decrease reflectivity from the sun.

The devices do not have access to the internet and are stowed away after games until the following Sunday to prevent any tampering. 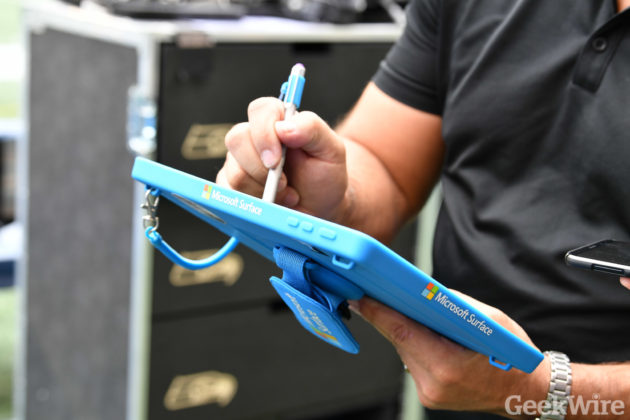 The NFL expanded the use of tablets this season for instant replay, replacing the “under-the-hood” monitor. There are now two tablets at each 20-yard line for the referees to review replays. The NFL is using the tablets to speed up the replay review process. 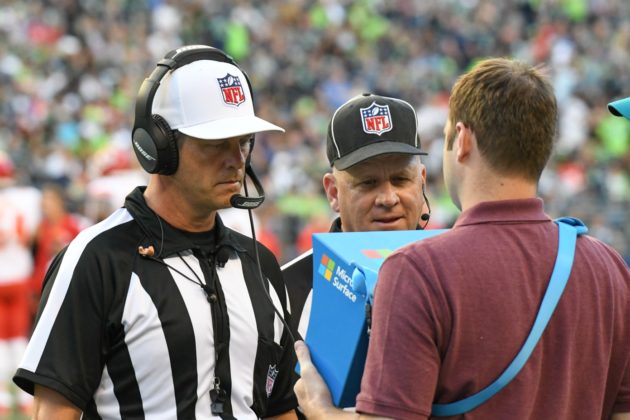 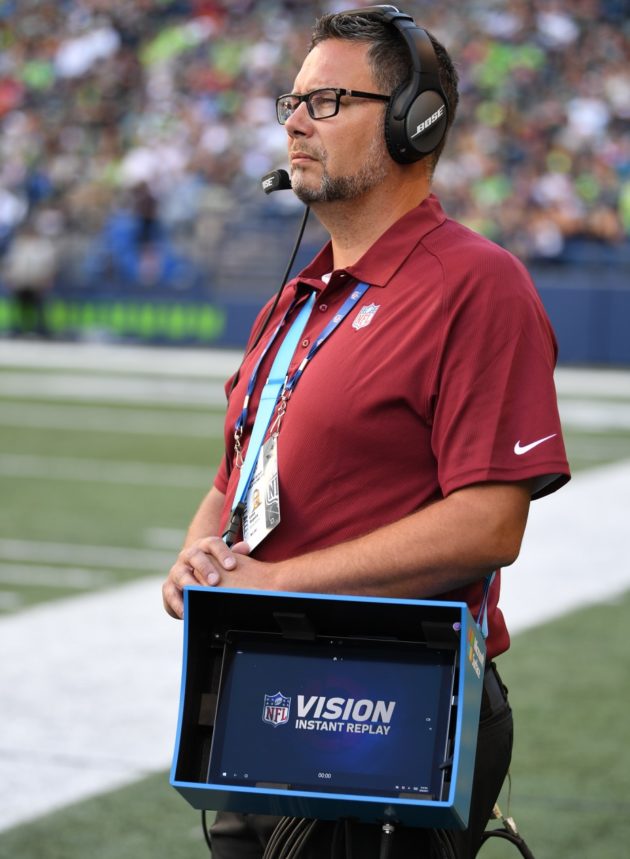 Bernstrom said Microsoft has been happy with how its partnership with the NFL has progressed, specifically with players, coaches, and now referees relying on the tablets as an essential part of the game.

As a fan, you’ve also probably noticed the headsets that coaches wear during games. The idea of a coach and player communicating with technology dates back to 1956, when a pair of Ohio inventors came up with a radio receiver that the Cleveland Browns secretly placed inside its quarterback’s helmet.

The NFL quickly banned the technology and it wasn’t until 1994 that the league approved an official communication system with headsets. In 2014, the NFL inked a deal with Bose, which replaced Motorola as the official headset of the NFL.

Last year, Bose upgraded the headsets, replacing the B20 model with a newer B30 version that features improved noise-canceling technology that I had chance to test — it certainly makes a huge difference when you’re standing inside a stadium full of 70,000 screaming fans.

Before the 2016 season, the NFL also made major league-wide improvements to its radio frequency technology. The older system worked in TV White Space, which sometimes caused problems when there was interference from TV stations or if media members would also use the same frequency.

That changed last year when the league acquired an exclusive frequency from the FCC for use at all 31 stadiums across the country. It also worked with a company called Green-Go Digital to upgrade its intercom system while beefing up its encryption technology to prevent potential tampering. 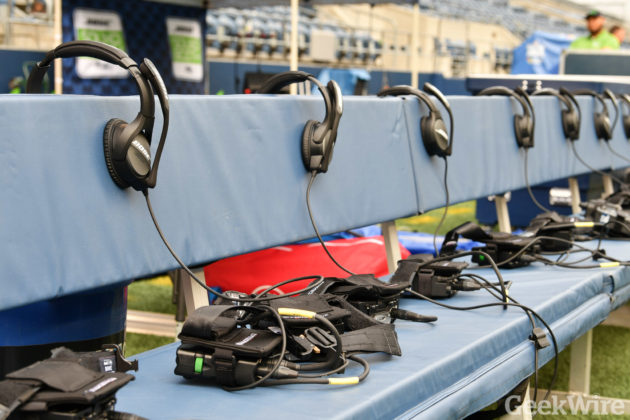 John Cave, vice president of football technology solutions for the NFL, told GeekWire that the new intercom system runs on an IP-based system built off extensive fiber optic infrastructure. It has essentially eliminated any frequency interference — something that caused problems over the past few decades, including during a controversial 2015 game between New England and Pittsburgh.

Each headset comes with a belt pack which has batteries that power both the wireless radio technology, as well as the noise-canceling feature. 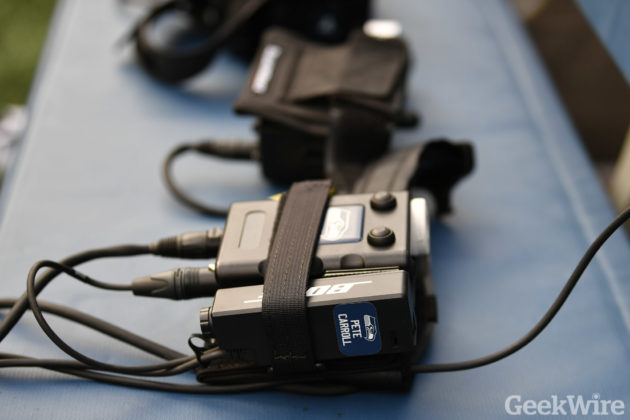 Coaches can switch between four different channels to talk to other coaches, as well as one offensive player and one defensive player — those who have a green sticker on the back of their helmet are the ones with orange earpieces. 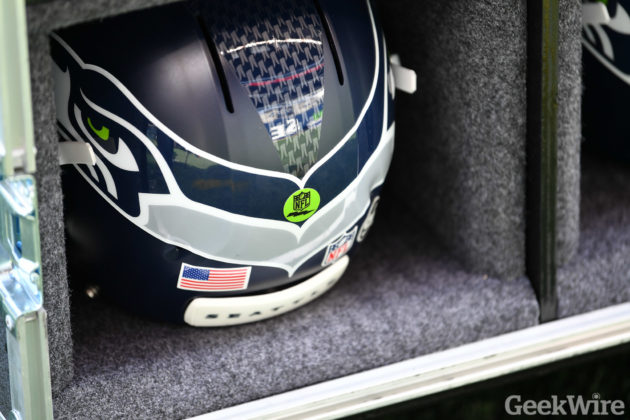 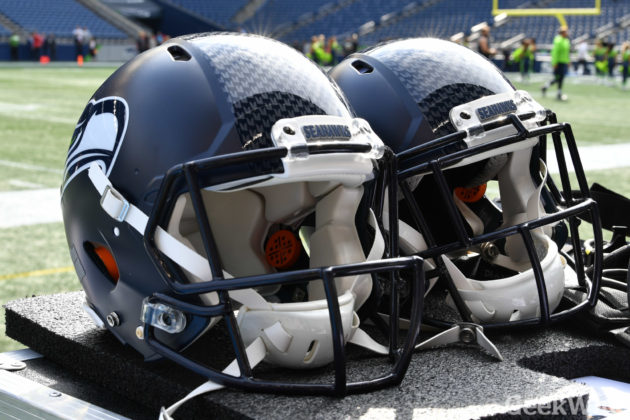 A team member works with staff and players to establish the channels for each coach, depending on who they want to talk to during a given game. The headset programming and battery levels are monitored via a laptop on the sideline. 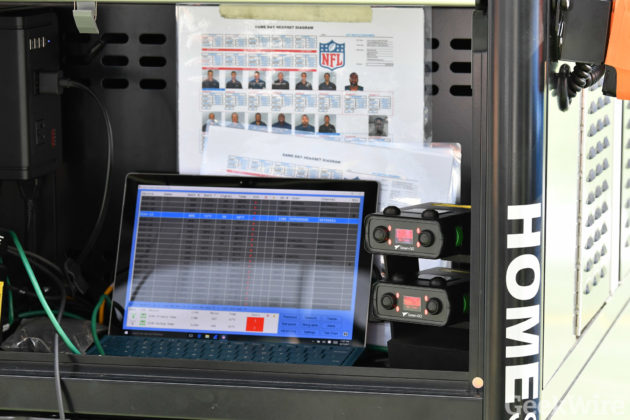 The new system also now allows allows coordinators up in the booth to speak directly to players on the field — something that Cave had to get approved by the NFL’s competition committee.

Players, though, still can’t talk back to coaches — it’s a one-way communication channel. Cave said it’s technically possible to enable this, though it would require players to wear a microphone, which could cause more complication.

Another upgrade made last year was an audio notification system that tells coaches when their communication channels with players open and close. When the play-clock hits 15 seconds, communication is cut off until the play is over.

Now, audio tones notify coaches when the line opens and closes. Before the change, coaches sometimes would think that they were communicating with a player, when in fact they weren’t, Cave said.

The NFL’s sideline system also includes technology that helps power communication between referees, who are on their own radio frequency and can also speak with NFL staff in New York. 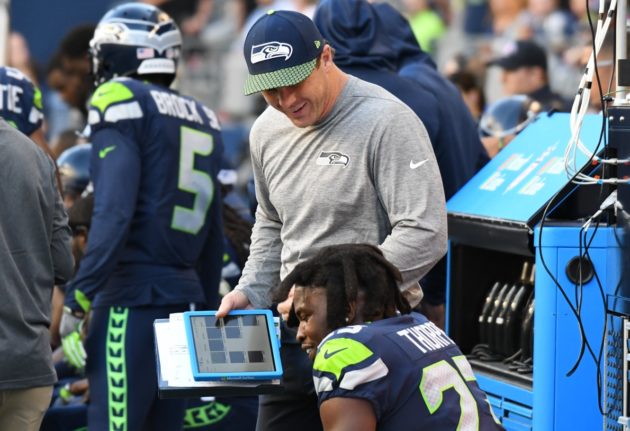 The Surface tablets are “absolutely” capable of delivering instant video replays to players and coaches, Bernstrom said. In fact, this functionality has already been tested during preseason games.

But Cave noted that some owners and coaches don’t want to give teams access to real-time video on the sidelines. For example, one coach didn’t like the idea of out-preparing an opponent during the week leading up to a game, only to have that work nullified because the other team can make real-time adjustments based on the video.

“It is really a fear of the unknown,” Cave said.

Some coaches also brought up the issue of having to employ more people to analyze video during games, Cave noted.

Cave, who joined the NFL in 2001, said the competition committee will often challenge new technology ideas based on two principles: manipulation and an “arms race.”

Teams are concerned about how new devices and software can be tapped into, thus creating unfair advantages. They also want to avoid creating an arms race, where the teams that spend the most money on new technology get the greatest advantages. That’s a big reason why players and coaches can’t use devices other than the Surface on the sidelines or in the booth.

Cave said that the league doesn’t want to implement new technology for “technology’s sake,” but pointed to the Surface as an example of an innovative tool that can improve the game. 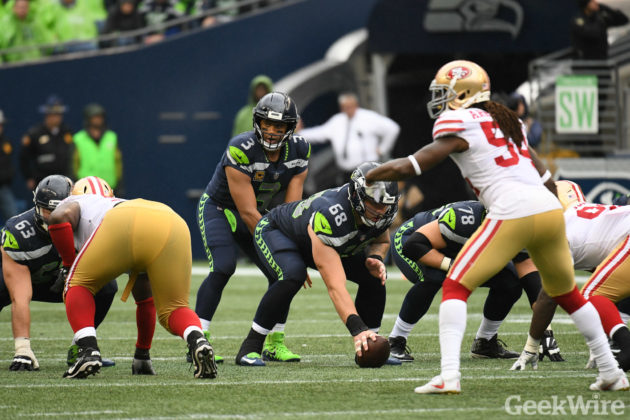 Ideas like electronic wrist displays for quarterbacks or an augmented reality screen attached to a helmet are fun to talk about, but actually implementing something like that is much more complicated.

“It’s one more technical thing that will have to be supported and has to work,” Cave said.

Adding new tech tools is a delicate balance for the NFL, which must think about tradition and fairness with each decision, in addition to other considerations. But a blueprint of sorts has been laid as the league integrates new tech with partners like Microsoft and Bose. It will need to continue adapting new products and services, particularly if it wants to cater to a younger audience and player.