Millennials are a cohort coveted by brands. The world’s largest generation, they have spending power and are early adopters of new technology. They’re also some of the loudest voices in the chorus calling for tech companies to take a more activist stance on political issues, like immigration and gay rights.

But a new report from Morning Consult indicates that while millennials may appreciate it when brands take a political stand, that advocacy isn’t likely to influence their spending decisions.

Researchers surveyed 2,202 people ages 23-37. Sixty-one percent of them said they would like a company more if it advocated for civil rights. Companies that pay their employees well would be more popular with 51 percent of respondents.

But that sentiment may only have a marginal impact on a company’s bottom line. Just 15 percent of millennials say they pay attention to political issues surrounding companies they buy from. Only 29 percent of participants in the study said they would not patronize a company with different political positions than them. And while most millennials in the study said they would like a company that fights for civil rights more, those numbers dwindle when it comes to more controversial matters, abortion and legislative races. 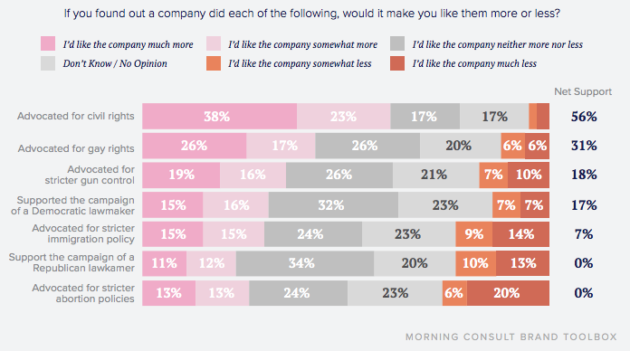 Big tech companies have been trying to walk the political line as activists and employees demand they take a stance on key issues. Microsoft employees have launched a campaign calling for the company to sever ties with ICE due to its child separation policy. The ACLU has repeatedly asked Amazon to stop selling its facial recognition technology to law enforcement. The public and lawmakers are calling for Facebook, Google, and Twitter to crack down on bias and disinformation on their platforms.

Despite this noise, Big Tech is still winning millennials’ hearts according to a separate survey of 18- to 29-year-olds cited in the Morning Consult study. The top five most-loved brands are YouTube, Google, Netflix, Amazon, and Sony.