When you consider the seismic shifts in computing history, there has usually been a period of adjustment during which the software development practices and techniques from the era that is winding down are shoehorned into the new world, because that’s what people know how to do. At a certain point, that stops making sense; Pulumi thinks it has found the way forward for the cloud computing era.

The Seattle-based startup, founded last year by veterans of Microsoft and Amazon Web Services, is launching a company, an open-source project, and a commercial software-as-a-service product on Monday. Backed by a $5 million seed round led by Madrona Venture Group and backed up by Tola Capital, Pulumi built an open-source platform that allows software developers to build their applications with multiple public clouds in mind using the programming languages they already know and love.

“There is incredible opportunity in the cloud today,” said Joe Duffy, co-founder and CEO of Pulumi. “Everything is moving to the cloud, and as a result, every developer is a cloud developer.” 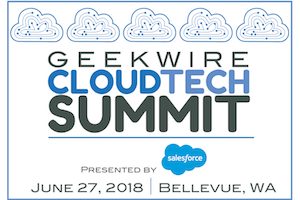 Duffy led several software development teams across a 12-year career at Microsoft, including an integral role in the open-sourcing of the .NET developer environment that marked a watershed moment in Microsoft’s history, as our recent conversation with Azure Executive Vice President Jason Zander recalled. He’s joined at Pulumi by executive chairman Eric Rudder — a former Microsoft server tools executive once considered a possible heir apparent to Bill Gates — and Chief Technology Officer Luke Hoban, who has worked for both Amazon Web Services and Microsoft over the past few years, as the founders of the 13-employee Capitol Hill startup.

Pulumi’s open-source platform allows developers to write code using the programming languages they already know that will work across multiple public cloud infrastructures. Call it cloud DevOps 2.0: rather than forcing developers and operations staff to learn specialized scripting or markup languages to make apps deployable on cloud services, allow them to ship their apps to any cloud with a few clicks.

These guys are going to do massive, big important things for developers and they are kind of the perfect people to do it.

“The current approach makes sense when all you were doing was taking existing programs, sticking them in a (virtual machine), and putting them in a cloud,” Duffy said. For all the talk about how developers are no longer allowed to throw code over a wall to the folks who have to actually make that code work in production, companies that are trying to deploy applications across multiple public clouds or hybrid clouds still need to have operations people who write scripts in order to make the whole operation work.

The Pulumi open-source project allows developers to write new multicloud-aware applications in popular languages like JavaScript, TypeScript, Python, and Go at launch, with support for Java and C# coming soon. The company is also launching a commercial SaaS product that allows customers to manage those deployments across cloud providers.

“There is a massive movement to the cloud among enterprise customers around the world,” said S “Soma” Somasegar, managing director of the Madrona Venture Group, who is joining the board of Pulumi as part of the funding transaction. “As that trend continues to gather and gain momentum, new and transformative techniques are required as customers truly begin to take advantage of cloud-native capabilities.”

Pulumi also allows developers to write applications that combine some of the most popular cloud-native development buzzwords into what it’s calling the “Colada architecture,” which represents containers, Lambdas (Amazon Web Services’ serverless computing product) and data services on a single platform. While I hope this moniker fades into tech marketing history alongside SoLoMo — this is perhaps exacerbated by the fact that I hate the taste of coconut — the idea is important, given how serverless computing architectures have the potential to lock customers into a computing environment like nothing we’ve seen before.

Microsoft’s Brendan Burns, who was part of the team that created Kubernetes, the multicloud deployment darling of today’s world, proposed something similar to Pulumi last December at KubeCon. Metaparticle, an open-source project launched along similar lines, wants to give developers a way to write code completely independent from the underlying public clouds on which it might run.

“Using existing, familiar programming languages reduces barrier to entry for novice programmers beginning to use the cloud, and also enables a rich ecosystem of existing tooling like unit test frameworks and integration with editors like VS Code and style/linting tools,” Burns said via email. “The ecosystem of tools for dedicated configuration languages exists, but it is significantly less rich.”