Providing feedback to your employees is not always easy, even for the most experienced managers. But it’s a crucial part of an organization’s long-term growth and success.

For Smartsheet CEO Mark Mader, who helped lead the enterprise software company from a 6-person startup to an IPO, following the act of “radical candor” — a term coined by author and startup advisor Kim Scott — has worked well. It’s the idea of providing direct and authentic feedback in a timely manner.

“It can be harsh, but it needs to be done with the supportive intent and undertone,” Mader said. “When you observe something and when you give feedback, the latency — the time between the event and the feedback — has to be very short. That has had a material impact on how I manage.”

Mader was the featured guest on Wednesday evening at The Playbook, a new GeekWire event series that dives into the fascinating intersection of entrepreneurship, business, sports and culture. 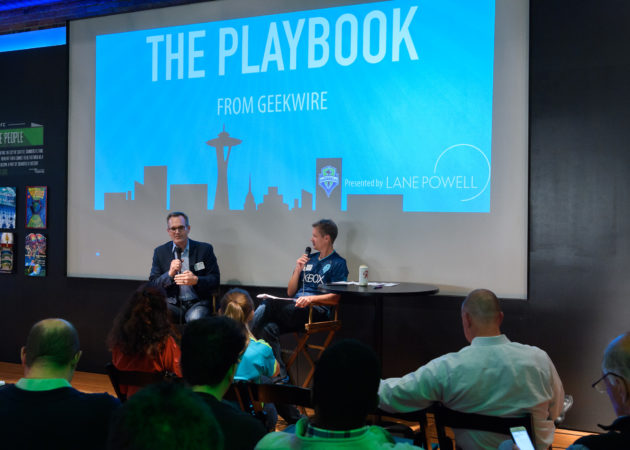 In the past 12 years, Mader helped lead the Seattle-area company through an early pivot and eventually to the New York Stock Exchange, where the CEO rang the opening bell earlier this year as Smartsheet — now worth more than $3.2 billion — went public at $15 per share. (It’s now trading just above $31 per share).

The advice on giving feedback was just one of several lessons Mader talked about on Wednesday. Here are four other leadership tips he shared. Big thanks to our partners at Lane Powell for helping make The Playbook happen.

From the outside, Mader seems like he’s got the whole work/life balance thing figured out. He just took a nearly 1,000 person tech company public; he’s the father of two teenage daughters; he’s on the board of the University of Washington Information School; and he goes to the gym.

So when a senior engineer recently asked Mader how he achieves such balance in his life, he was taken aback.

“That would not be Mark Mader,” he responded.

Mader said he may not achieve perfect “balance” with work and life, but he says that’s O.K. The CEO never views work as a cost, and said spending time with his family is not about quantity, but quality. “I have really special moments with them,” he said.

Mader added that his wife would rather see him out of balance and energized, versus the other way around.

“You have to understand what drives you and what makes you happy,” he said.

Mader became emotional when he talked about having his daughters and wife with him on the floor at the NYSE when Smartsheet rang the opening bell and went public. “That’s one of highlights of the year,” he said.

On how lessons from sports can be applied to business

Mader played football at Dartmouth as an offensive lineman. His experience on the field helped craft some of his leadership philosophies at Smartsheet.

For example, Mader said that “being coordinated and understanding what the plan is” is extremely important both on the field and in the office.

He also pointed out that linemen often get praised less than a quarterback, even though both players may have contributed equally to a win. Mader said he’ll avoid overindexing on a salesperson who closes a big deal — typically other employees or even a customer were just as important to the success.

“Having an appreciation for how teams work and how people get rewarded and heralded — when you live that and develop an opinion on it, it can permeate how you work professionally,” Mader said.

On why values don’t matter

Values don’t matter because unless you put those in motion, they are somewhat meaningless.

Mader still runs new employee orientations with 30-to-40 fresh Smartsheet workers each month. Much to their surprise, one of his first statements is that “values don’t matter.”

Of course, Smartsheet’s core values — honest; supportive; driven; innovative; authentic; effective — are important. But they are just words, after all.

“Values don’t matter because unless you put those in motion, they are somewhat meaningless,” Mader said.

Culture isn’t something that gets sprinkled on new employees as they walk through Smartsheet’s doors on their first day at work, Mader said. It’s something that is earned.

“I can go into work tomorrow and not live those [values] and be non-comforment,” Mader said. “I’ve been there for 12 years, but all of a sudden I’m not part of it. If you have a mindset of having to earn it everyday, that is what matters.”

As Mader walked through the engineering floor at Smartsheet the other day, he spoke to someone working on an important project and made a point of giving his full undivided attention.

It was a short conversation, but it made an impact on his colleague, who was super fired up about the brief chat. These types of interactions are particularly important for a growing company like Smartsheet, which now has nearly 1,000 employees.

“It’s not about making sure I check in, but the fact that he will tell 20 other people on his floor about those three minutes — I was actually interested in what he was talking about, and I think he felt that,” Mader explained.

Mader added: “Being present and authentic — people can sniff that out.”