PITTSBURGH — After pulling off Route 8 and rounding the corner up a steep hill lined with leafless trees, it became clear this wasn’t going to be an ordinary story assignment.

I was heading to the Coatings Innovation Center of PPG Industries, a 135-year-old global paint giant based in Pittsburgh. We were only 20 minutes from the company’s downtown headquarters, but it felt much further than that.

The grey skies and chilly air added to the spooky vibe; it felt like a scene straight out of Stranger Things. We passed a herd of deer as the nondescript facility finally appeared. 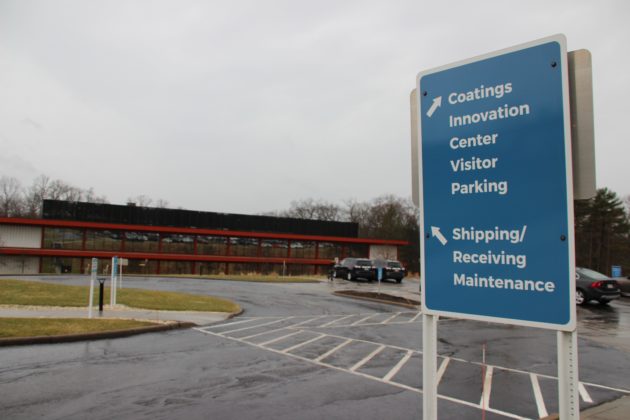 In this building, tucked away atop a hill in the Allison Park suburb, PPG conducts research and development for coatings that end up on everything from iPhones to airplanes. It’s a secretive 86-acre complex — at one point I was scolded by security personnel while taking photos outside — and a key center of innovation for a company that reported $14.8 billion in annual sales last year.

In a region that has become a hub for self-driving technology, this PPG facility might be the last place you’d expect learn more about the future of autonomous vehicles.

Within these walls, PPG develops technology to help self-driving cars detect other vehicles via LIDAR sensors. This is a nascent but important business for the paint behemoth, which this week announced a new mobility team that will create and commercialize paint and coatings technologies for autonomous and electric vehicles.

“We’ve always painted things that move, but the dynamics are changing,” said Ranju Arya, a 23-year PPG veteran who leads the new mobility group. “Some of the enabling functions are changing.”

One focus of the lab: coatings for dark-colored vehicles. The infrared signals sent from a LIDAR device, which help an autonomous vehicle scan its environment, don’t bounce off darker colors well. As a result, it’s harder for sensors on a self-driving car to detect other cars with black paint, versus white or something brighter, because black doesn’t reflect light as well as lighter colors do. Just as it’s hard for a human to see a black car at night, it’s difficult for sensors on a self-driving car to detect darker vehicles on the road.

PPG’s coatings have a special layer that restricts the absorption of signals into darker-colored paint, aiding the sensors used on self-driving cars.

“What we’ve been able to do is make black look black and beautiful to our eyes, but when a sensor looks at it, it might as well be white,” said Calum Munro, a senior scientist who joined PPG more than 20 years ago.

The coatings use reflective technology that PPG previously developed for the aerospace industry. In 2015 the company created a coating for Southwest Airlines that helps keep interior cabin temperatures cooler by 5 to 7 degrees. The science is modeled after an eggplant, which has dark purple skin that keeps heat away from its interior.

“We have experience of being able to manipulate the way invisible wavelengths interact with a system and yet still make it look great,” Munro explained. “That’s a big opportunity we see coming forward, whether it’s private or fleet ownership of these future vehicles. We’re still going to make sure they look good, but anything we can do to enhance the way the sensors interact with those vehicles should provide an advantage for the integration of this technology moving forward.” 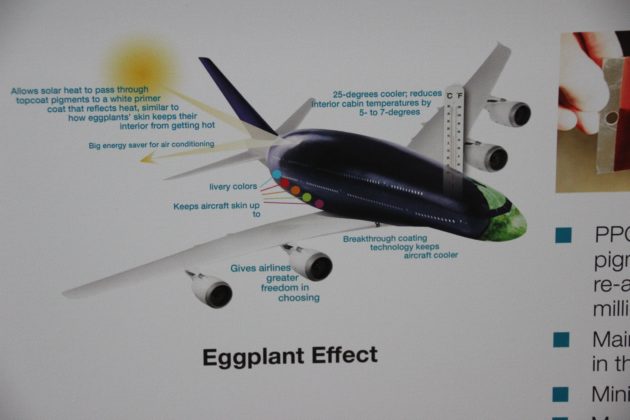 The coating can be used not just on vehicles, but on other objects that a self-driving car scans, like a building or bridge, for example.

PPG is also developing coatings for camera lenses on self-driving cars to prevent blockage from dirt and bugs. In addition, it is creating coatings for battery packs in electric and hybrid cars, helping make them lightweight, safer, and able to run longer on a single charge.

“But more and more there’s this third leg of the stool that’s coming into play, which is functionality,” he said.

More technology is being packed into various surfaces, allowing for more interaction with users and an environment. That’s opportunity for a company like PPG and its 380 researchers at the Coatings Innovation Center.

The company wouldn’t name specific customers, but Bryan Iams, vice president of corporate and government affairs, said “we basically serve really almost every automotive platform you could think of from a brand perspective.”

A quick walk through PPG’s labs — goggles and lab coats are required — is a reminder of how the company’s coatings are ubiquitous, and not just in the automotive industry or in paint stores. Coke cans, race cars, golf balls, tractors, trains, ships, buildings, walls, halls — you name it.

“Our chairman likes to say, ‘If it moves, we paint it. If it doesn’t move, we paint that, too,'” Iams said.

PPG is one of Pittsburgh’s oldest companies, having launched here in 1883. It started as a glass company but now the business and its 45,000 employees are focused on paint coatings. PPG employs 3,000 in Pennsylvania, including 1,000 at its downtown headquarters.