The house at 6630 S. Nash Way in Chandler, Ariz., looks at first glance like any other upscale home in the Phoenix area. Built in the early 2000s as part of a master-planned community, it checks the boxes of what most buyers in the region are looking for — a big lot, huge kitchen, sprawling backyard with built-in barbecue and pool, and proximity to good schools.

But one important fact makes this 15-year-old, four-bedroom, two-bath ranch-style home stand out from the rest: it will forever carry the historic designation as the first house purchased directly by Zillow Group, renovated and then listed for sale by the company on its website.

Zillow announced the expansion of its Instant Offers program last month, getting into direct home-buying and selling for the first time and expanding beyond its traditional role as a real estate media company. It already has dozens of homes under contract in its first test market in Phoenix. Zillow will start buying and selling homes in market number two, Las Vegas, in a couple weeks.

As GeekWire reported last week, Zillow’s move into direct home buying and selling marks a risky bet, but one that CEO Spencer Rascoff says could be especially lucrative.

As the first home to be purchased and listed by Zillow, the ranch house on Nash Way is a case study in the company’s approach — including the types of houses Zillow is seeking to buy, and how the company will handle the purchase and sale. GeekWire spoke with Zillow insiders and the couple that sold the home to get an inside look at the process. 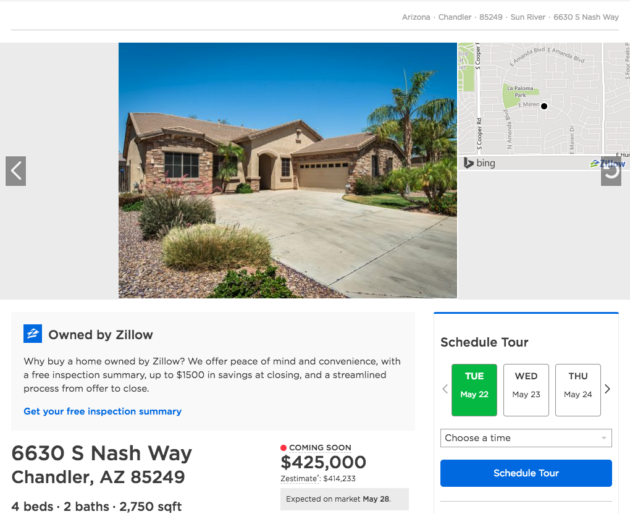 Noel and Patricia Levine purchased the 2,750-square-foot house in 2012 for $285,000. The Levines lived there for about three years before Patricia got a new job at a health insurance company on the other side of the region. To save travel time, they decided to rent the house out and get an apartment closer to Patricia’s job.

But a couple months ago, the tenant decided to move back east. Faced with the lose-lose choice of painfully long commutes living in the house or paying for two places at once, the Levines decided to sell the house quickly.

Noel Levine, a freelance IT consultant and self-described geek, said he looked into other online services like OfferPad and OpenDoor, which the new Zillow program competes against. He was thinking about listing the house with a broker when he saw an article about the Zillow Instant Offers expansion in the local newspaper. Zillow was able to accommodate the quick turnaround. The deal started with a request for an offer on May 3 and closed 15 days later, at a purchase price of $410,000.

“So in two weeks I went from having a house to put on the market to being out of the house with money in the bank,” Levine wrote in a thank you note to Zillow that he shared with GeekWire. “It spared me from having to go thru the trials and tribulations of wondering how many showings it was getting, then wondering if I should accept an offer, to dealing with the inspection deductions to worrying about what could go wrong with the closing.”

The home is now listed on Zillow with a priced at $425,000 (the Zestimate is $414,233). It boasts “real wood flooring, travertine tile, and stacked stone accents,” according to the listing. The company bets that buyers will love the “cozy gas fireplace” and “master retreat.”

Here’s how the process works: For select parts of Phoenix, some homes on Zillow have a big button that says “get an offer.” The seller fills out a short questionnaire and sends in a couple photos. About 48 hours later, Zillow comes back with an offer and an agent to work with. The seller and Zillow set up a call to walk through the offer and schedule an inspection. Then Zillow sends a revised offer after seeing the house. If both sides are happy with the situation, the seller signs forms digitally and picks a closing date. Zillow takes care of the rest.

A $15,000 difference between how much Zillow paid for the home and the amount it’s looking to sell for doesn’t leave a lot of room for error or extra costs. But the company says it is going for sales volume over making a bundle on each and every sale. Rascoff explained the company’s pricing strategy in Zillow’s most recent earnings call, saying that right now, the main goal is just to come out ahead on homes at the beginning of the new program. Rascoff expects the margin on each home to rise as the home sales business grows.

“It’s too early to estimate how many sellers might choose to sell (to Zillow) or what our typical net profit per transaction might be, but as an example, if 5 percent of sellers select this method, that is 275,000 transactions,” Rascoff said on the call. “For illustrative purposes at scale, using $250,000 as the typical home value, a $3,500 net profit per transaction would result in a nearly $1 billion profit opportunity annually.”

Levine said the price he got from Zillow actually ended up being a better offer than he had seen from other sites or brokers, after accounting for commissions. Putting a house on the market is a painful experience, but he praised Zillow’s process, saying it removed a lot of the complications and uncertainty.

Not every sale is going to work out as well as this one. Some houses will need too much work for Zillow to take on, and the two sides won’t always agree on the value of the home.

At least for the Levines, the transaction was successful. Zillow will now have to sit back and wait to see what buyers think of its first attempt to sell a home directly.

With the purchase of the home all buttoned up, contractors working for Zillow are in the midst of a light-touch renovation — painting, carpet changes, etc. — and getting ready to put it up for sale. On the listing, Zillow says it wants to have the house ready for the market by Memorial Day.

Then it’s time for open houses and showings. Real estate agent George Laughton, whose firm Laughton Team is Zillow’s launch partner in Phoenix, said he expects to lean on the company for branding — Zillow balloons and fliers at the open house, for example — because he thinks having the name on everything will be a benefit. Otherwise, this first-of-its-kind sale has been business as usual for Laughton.

“We’re doing the normal type of marketing we would do, posting it as coming soon on Zillow, so nothing too out of the ordinary from what we would normally do,” Laughton said.

Zillow’s decision to move into buying and selling houses was a surprising one, as Zillow CEO Rascoff once said: “We sell ads, not houses.” But things change and Zillow is diving into the unpredictable housing market.

For 2018, Zillow expects to hold 300 to 1,000 homes in inventory related to the new Homes financial reporting segment, from which it expects $125 million to $255 million in new revenue. For comparison, cross-town rival Redfin’s new home buying and selling program Redfin Now just upped the maximum amount of home values on its books at any one time from $10 million to $25 million.

Zillow isn’t using a high-tech algorithm or its wealth of industry knowledge to find houses to buy, said Zillow’s Chief Marketing Officer Jeremy Wacksman. Right now it is letting the sellers come to the company.

Zillow’s “buy box,” according to Wacksman, for now consists of average-sized homes around the median price that only need light renovations. The company will expand out to a greater variety of homes as it gets better at the buying and selling process.

“In the long term we hope to be able to bring this to as many consumers as we can. Every homeowner should ideally be able to have not just a Zestimate, but have a Zestimate and have a cash offer and an agent and know what their choices are,” Wacksman said.

The Levines, the former owners of Zillow’s first home, are excited for that eventual expansion. Today they live in an apartment on the north end of the Phoenix area and own a condo in nearby Tempe. Noel says might try to sell that place sometime soon.

“The minute they tell me they are servicing Tempe,” Levine said, “I will submit that condo to them.”

Editor’s Note: This story has been updated to include commentary on Zillow’s pricing strategy.