“We sell ads, not houses,” Zillow Group CEO Spencer Rascoff declared in a conference call with analysts three years ago.

But times change, and Rascoff is now singing another tune.

It’s a big bet, and a risky move that some say is misguided.

But not Rascoff. He thinks Zillow — which has long made a majority of its revenue from advertising and lead generation tools for real estate agents — can now make a bundle in the volatile, and often unpredictable, housing market.

“We are confident that we can provide these consumers with a positive home selling experience,” said Rascoff, explaining how it would start buying and selling homes in Phoenix and Las Vegas as part of its expanded Instant Offers program. “We believe that Zillow Group possesses structural advantages in this space.”

The 12-year-old company showed its commitment to the new endeavor earlier this month when it revealed a new reporting segment in its financial results: “Homes,” which is specifically for revenue Zillow makes from buying and selling homes.

But not everyone is buying into the idea. In a conference call last month after the new effort was announced, Deutsche Bank analyst Lloyd Walmsley told Rascoff that it seemed “like an awfully big pivot in terms of business model” and one that comes with “inventory risk” and could consume “a lot of capital.”

I can say without exaggeration, that no company understands the American homebuyer and home seller better than Zillow Group.

“After deep study and consumer insights, we believe that there is a big opportunity here,” responded Rascoff. “…I can say without exaggeration, that no company understands the American homebuyer and home seller better than Zillow Group.”

Zillow does sit on mountains of real estate data, information it will surely use as guidance in the buying and selling of homes. It plans to use that data to source homes, and leverage other business lines like mortgage and advertising to grow its share of real estate transactions in the U.S. housing market. Consumers will benefit because Zillow can quickly take the pain out of the stressful home buying and selling process, while agents will be rewarded with a deep-pocketed buyer in Zillow, the company says.

Even so, some think Instant Offers is a distraction. And others warn that — as the winds of residential real estate change — Zillow could be left in the cold. Wall Street initially reacted poorly to Zillow’s new side business, sending the stock down 13.5 percent the week following the announcement, but since then shares have recovered.

“I’m struggling to understand why Zillow would be attracted to a capital-intensive, low-margin business when it seems to be gaining market share in its much higher margin software and advertising businesses,” wrote Matt Hylland in Seeking Alpha. “…This new venture requires tons of capital, does nothing to improve its market share in any current segments, potentially takes away from its ability to monetize its platform, and adds significant risk to the company’s balance sheet.”

In a note to investors, RBC Capital downgraded Zillow’s stock and wrote that the company’s direct buying and selling of homes “carries VERY high execution risk.”

“Based in part on our tracking of Opendoor over the last few years, we believe the “On-Demand Home-Selling/Buying” market is exploding,” the note reads. “And we believe Zillow has many of the competencies to succeed in this market, but it’s unclear it has all of them. So we could see execution/digestion risk here — for both the company & stock.”

Opendoor launched in 2014, building a tech platform that uses algorithms to give home-sellers a quick offer.

Backed with $320 million in venture funding and reportedly valued at $2 billion, Opendoor also resells houses, and says it has serviced more than 15,000 customers as it continues to expand into new markets. OfferPad is a similar company that just raised $150 million and ended its partnership with Zillow last month after the expansion of Instant Offers.

“Welcome, Zillow. Seriously,” Opendoor CEO Eric Wu wrote in an email to GeekWire shortly after the expansion of Zillow’s Instant Offers program. “We are genuinely excited, having invented this new category in 2014, and it’s invigorating to see a host of others in the industry recognize the importance of removing hassle and time from the transaction.”

While Zillow, Opendoor, Offerpad and others are genuinely excited about this new model for residential real estate, it’s still unclear on whether it will catch on with a large swath of homebuyers and sellers. And while it may be a faster way to sell a home, it might not be the best, said Pete Crowe, executive vice president of business and product strategy at RE/MAX.

“While there are homeowners who value the convenience of a quick sale and are willing to take an offer below market value to achieve that, research shows the vast majority want the maximum return on their investments,” Crowe told GeekWire.

Last year, 89 percent of sellers and 87 percent of buyers used a full-service agent, according to statistics from the National Association of Realtors.

“Having a professional agent with seasoned negotiation skills, neighborhood expertise, pricing strategies and serious hustle on behalf of a buyer or seller is a huge advantage, especially true in a tight market, where houses command multiple offers and often sell for more than the asking price,” Crowe said.

“Homeowners are extremely price sensitive,” said Redfin CEO Glenn Kelman. “We weren’t sure when we launched [Redfin Now] whether they’d really do the math, but they always do. They try to figure out whether they get more money if they sell it themselves, than if they sell it to an institutional buyer like Redfin or Opendoor or anyone else.”

In the first quarter of this year, Redfin purchased 15 homes, and it expects to double that number in the second quarter. From the fourth quarter, it has sold all but two of the homes it bought, and Redfin expects to sell those two by June. Redfin Now accounted for $3.1 million in revenue during the first quarter.

Kelman said it’s the perfect time to launch something like Redfin Now given a strong sellers market and that businesses have freer access to capital than individual consumers. In that vein, he said Redfin acts as a “a provider of liquidity.”

However, Kelman noted the potential downsides. “When we buy a house that we can’t sell, that’s a balance sheet risk,” he said. Redfin is treading carefully.

“Everything that makes this business good can make this business bad,” he added. “…If interest rates go up, it will drive a reversal in the market where it becomes a buyers market. It’s really easy to have 100 or 1,000 homes on your balance sheet, and suddenly have creditors yapping at you for their money back while buyers can’t get a loan.”

Rascoff addressed that concern — also raised by Deutsche Bank’s Walmsley — saying that they plan to hold onto homes for less than 90 days, and that Zillow can use its predictive analytics and consumer data to “see issues coming.”

“We think we can weather any downside risk better than anyone,” Rascoff said.

Zillow started its new initiative last month with the Phoenix market, where homeowners can receive an offer directly from Zillow, which then gets a property ready to list on the open market and sells it with a local brokerage. The homes will be listed in the local MLS and on Zillow.

It’s an expansion of Zillow’s Instant Offers program, which launched last year and connects homeowners to offers from investors, as well as a comparative market analysis from a local real estate agent.

We think the size of the prize is so significant that we don’t want to share it.

So why is Zillow injecting itself into the Instant Offers process, rather than relying on offers from third parties?

“We think the size of the prize is so significant that we don’t want to share it,” Rascoff said on Zillow’s first quarter earnings call.

A fresh coat of paint and a new carpet

“This new service has been welcomed by the real estate industry,” Rascoff wrote in his prepared remarks for the company’s first quarter earnings report. He indicated that, using $250,000 as an average home value, Zillow could produce nearly $1 billion in profit each year with the new business, given that there are 5.5 million annual home sales at $1.8 trillion in annual sale volume. 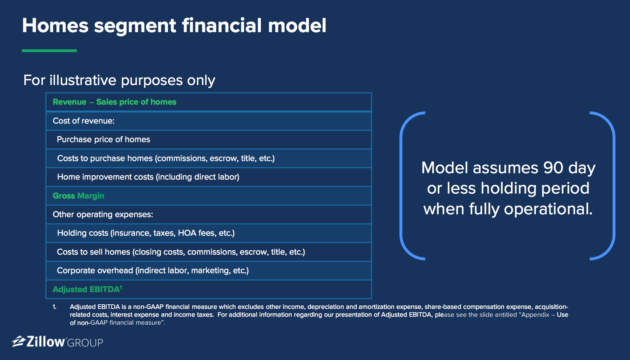 Zillow is focused on making small renovations to single-family houses in that $250,000 price range. Rascoff said the company isn’t in the business of flipping homes.

“The way to think about this is a service to the seller,” he explained. “We’re basically doing the type of touch-ups that a seller would otherwise have to do on their own while readying their home for sale: cleaning carpets, a coat of paint, a couple thousand-dollar touch-ups to a home. We can do that more cheaply, of course, than an individual home owner because we’ll do it at scale. We’re doing the work that was going to be done already and we’re essentially charging a fee for that work — and that fee is the net profit we’re making on the buying and selling of a home.”

The way to think about this is a service to the seller.

Rascoff was peppered with questions about the new offering by analysts throughout the earnings call this month, after the company posted $299 million in first quarter revenue.

Analysts asked about gross margin on each transaction, and how Zillow would be able to grow that over time. Rascoff noted that Zillow will pay commissions that are “locally consistent with what other investor buyers pay at scale.”

“Much more important to the unit economics than the commission is the other components of the transactions: what we pay for a home, what the light remodel is, what we sell the home for, how long we hold it for, what the debt used are,” Rascoff added. “Those things are actually even bigger determinants of the unit profitability and return on equity than even the commission. We think there is an opportunity for significant return on equity from the homes business, given that we’ll be putting 20-to-30 percent cash down and turning the capital at least four times a year.”

Rascoff noted that seller demand has exceeded expectations so far in Phoenix, where Zillow has already signed a few purchase agreements.

As far as how the Instant Offers expansion will affect Zillow’s core Premier Agent business — which brought in $213 million in revenue last quarter — Rascoff said he’s not worried about cannibalization.

“Zillow says it will still use agents as part of Instant Offers,” Bloomberg reported last month. “After it all, it has a robust advertising business to protect, and it certainly doesn’t want to bite the hand that feeds it.”

Rascoff said that agent reaction has been overwhelmingly positive, and Zillow offers unique benefits over rivals that cut some agents out of the equation.

“This is a great way for an agent with an active listing to get a sale price from us,” he said.