Human’s product is still under wraps, nearly four years after the company launched. But investors continue to bet big on the Seattle startup.

Human is developing over-the-ear wireless headphones that are a “natural extension of the ear” and let users touch, tap, and swipe to control audio. The product works with a smartphone app.

The startup raised more than $500,000 in an Indiegogo campaign in October 2016, but has delayed delivery of the headphones to 2,300-plus backers by more than one year from its original target date.

According to a monthly product update posted Friday on Indiegogo, Human is working on an “EV3 build.” Here’s an excerpt of the update, posted by Human co-founder Ben Willis:

“With the receipt of our EV2 units, we’ve started tuning and optimizing the internal and external microphones. This is critical work that will set our headphones apart in terms of external sound amplification and overall performance. Additionally, our firmware team continues to significantly improve feature stability and performance. Our iOS and Android developers and user experience teams continue to build and test the Human app. With the hardware, firmware, and software all coming together, we are getting very excited about the inevitable release of Human Headphones.”

Human still plans to ship headphones to original backers. Some have grown frustrated with the delay; Human is issuing refunds to those that request one.

Here’s a look at the company’s “product completion checklist” (click to enlarge): 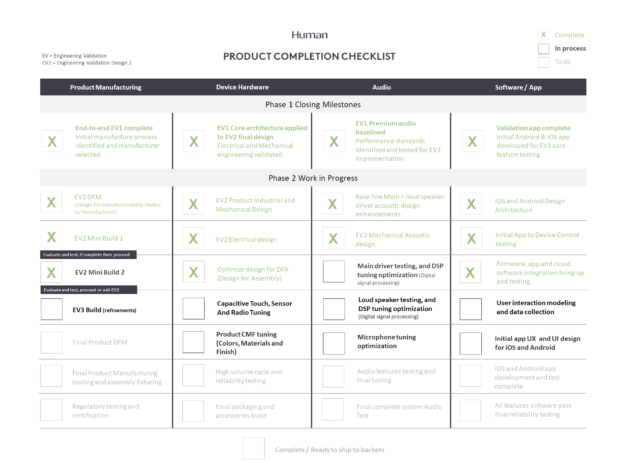 In a job posting, Human bills itself as a “hardware and software venture that is on a mission to see technology become natural, almost biological.” Another tagline is “we are united in building products that bridge the gap between humanity and technology.”

The company last raised cash in April 2016, a $5 million round, when it also hired former RootMetrics leader Bill Moore as its new CEO. Human raised a $700,000 seed round in 2015. Investors include early backers of Amazon and Apple.

Willis co-founded Human with Joe Dieter, who no longer does full-time work with the company. Other executives include CFO Ron Stevens, formerly a financial exec at RootMetrics and Haggen; Chief Product Officer Paul Cole, previously a vice president of product development at T-Mobile; and Eliza Arango-Vargas, vice president of engineering who spent eight years at Microsoft working on products including Zune. The company has 35 employees, according to LinkedIn.

Wireless headphones have become more prevalent over the past few years, particularly with the popularity of Apple’s $159 AirPods.