Tech giants like Amazon and Google have scooped up scads of office space in recent years, but the top companies on the GeekWire 200 — our ranking of privately-held Pacific Northwest tech startups — have been active lately in upgrading their headquarters, adding another layer to the already competitive office market. 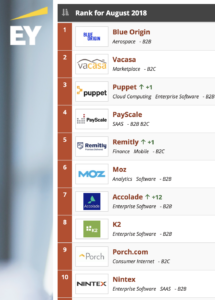 Rover (No. 18) is the latest top Northwest company to land a big new HQ. The well-funded pet-sitting heavyweight plans to move to a new five-story, 91,150-square-foot space in the 8th + Olive building in downtown Seattle next year with room for 700 employees — and their dogs — replacing its current 50,000-square-foot headquarters.

The news of Rover’s move comes a few weeks after we learned that Outreach (No. 26) snatched up the old Big Fish Games space in Seattle’s Interbay neighborhood. The space has room for 350 people, giving a hint that Outreach has big plans to grow its 200-person Seattle workforce.

Beyond these two major recent moves, several other top names on the GeekWire 200 have made real estate plays in the last year or so.

All this real estate activity comes in the midst of a tough environment for companies looking to expand. There are only 25 blocks of available space over 50,000 square feet in the Seattle arear, 10 of which are over 100,000 square feet, according to real estate firm Kidder Mathews.

In addition to competing with tech giants like Amazon and Google for space, GeekWire 200 companies are dealing with competition from co-working companies like WeWork, which is in the midst of a massive Seattle-area expansion.

Healthcare tech company Accolade entered the top 10, moving up 12 spots to number seven in one of the biggest jumps this month. Headquartered in Seattle and Philadelphia and led by Concur co-founders Raj Singh and Mike Hilton, Accolade guides customers through the ins and outs of the healthcare system.

Accolade unveiled its AI-fueled healthcare personalization platform last year. And it is coming off a huge $50 million funding round in March to bring it to more than $200 million in its lifetime.

The company recently said it now serves 1.5 million employees and their families in the U.S. Accolade has grown to 900 employees, with plans to add another “couple hundred” in the next year. About 100 of the company’s current employees are based in the Seattle region.

Seattle-based SkyKick jumped into the top 50 this month, moving up five spots to number 48 in the rankings.

SkyKick builds software for consulting companies and service providers that small-and-medium-size businesses use to create an IT strategy. Its flagship product, Migration Suites for Office 365, simplifies moving email and productivity tools over to the Microsoft-hosted Office 365.

SkyKick in May raised $40 million, and said at the time it planned to hire “across the board,” focusing on its Seattle headquarters but also looking to boost engineering, sales, marketing, and support across its worldwide offices in Amsterdam, Sydney, and Tokyo. The company said in May it had 150 employees around the world — its LinkedIn page lists 166 employees now — and it has raised $65 million to date.

MoxiWorks, a Seattle-based startup that provides an open cloud platform for real estate brokerages continues its steady climb up the list. Four months ago it was ranked No. 159, and this month it cracked the top half of the GeekWire 200, moving up 10 spots to number 95.

Zillow, DocuSign and Inrix are a few examples of companies with integrations on MoxiWorks’ cloud platform. MoxiWorks is used by more than 110,000 agents at 60 brokerages.

In June, MoxiWorks unveiled its latest product, a data-driven recruitment system for brokerages called Moxi Talent. In April, the company released a product called Moxi Insights that gives real estate agents access to a trove of public data on clients and prospects

Here are a few of the other big risers in August:

A half dozen startups debuted or made their return to the list in August. They are: Subsplash, Gradle, Wrench, Peach, 10,000ft, IMPREV

The GeekWire 200 — sponsored by our partners at EY — is derived from our broader list of more than 1,200 Pacific Northwest tech startups. The list is designed to provide a better understanding of the startup landscape in the Northwest. The rankings are generated from publicly available data, including social media followings, approximate employee counts (via LinkedIn) and inbound web links. As we mentioned, the most important factor is employee growth, since our goal is to track those companies who may be emerging as the next Microsoft, Amazon or Expedia.