For all of Jeff Bezos’ accomplishments, one accolade he hadn’t attained was leading a company sitting atop the GeekWire 200, our ranking of privately held Pacific Northwest tech companies. Until now. 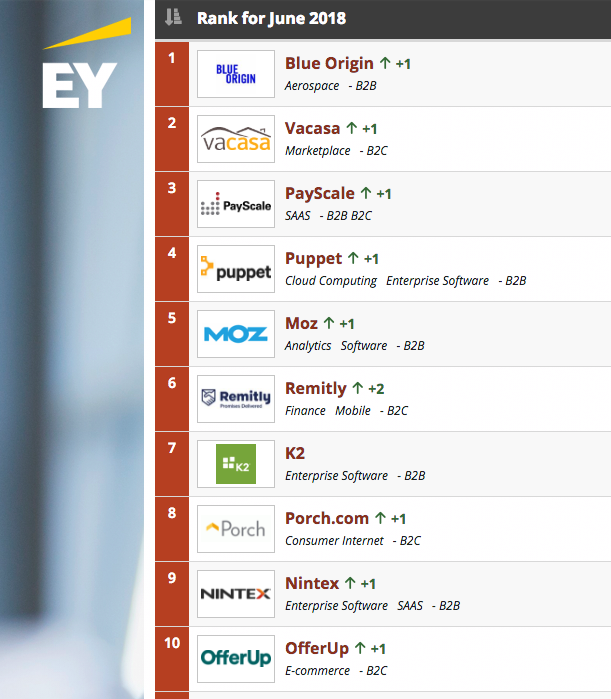 The Amazon CEO’s other company, Blue Origin, has ascended to the top spot, following former number one Avalara’s departure from the list due to its IPO this month. Blue Origin is the first space company to hit number one on our list, and it is also the third different company to claim the top spot this year.

The GeekWire 200 has never before seen this level of turnover at the top, as DocuSign maintained the top spot for much of the last few years, before graduating thanks to an IPO of its own in April. All the movement speaks to an increased pace of IPOs and an appetite from Wall Street for enterprise software companies, one of the Seattle region’s core tech strengths.

DocuSign and Smartsheet both debuted on the public markets on the same day, April 27. Avalara joined the ranks of publicly traded companies in June. All three stocks started trading well above their IPO prices and have stayed there.

Today DocuSign stock is trading at about $53, an 83 percent premium on its initial price of $29. Smartsheet priced its shares at $15, and the stock has risen about 60 percent since. Avalara set its share price at $24, and its stock is up about 87 percent since then.

With the dust settled from all the recent IPO activity, here’s where the rest of the top five stands behind Blue Origin: vacation rental company Vacasa comes in at number two, followed by compensation software maker PayScale, Portland-based DevOps startup Puppet and marketing technology company Moz.

It’s been more than two years since Pro.com shifted its business model from a marketplace focused on contractors and home improvements to being a general contractor itself with a full roster of in-house construction personnel. The company has been steadily climbing up the list as its new focus takes hold, and this month Pro.com rose 10 spots to number 107.

Founded by former Digg CEO and Amazon manager Matt Williams, Pro.com has contractor licenses in Washington, California and Colorado. It looks like the company will soon expand into Arizona as well, as Pro.com is looking for a construction manager in Phoenix.

Williams told GeekWire last year the company’s goal is to establish presence in the top 10 or 15 U.S. markets, starting with major West Coast cities. It has raised $27 million in its lifetime from a list of high profile investors that includes DFJ; Andreessen Horowitz, where Williams did a stint as an entrepreneur in residence; Bezos Expeditions, Amazon CEO Jeff Bezos’ capital investment firm; Madrona Venture Group; Maveron and Two Sigma Ventures. 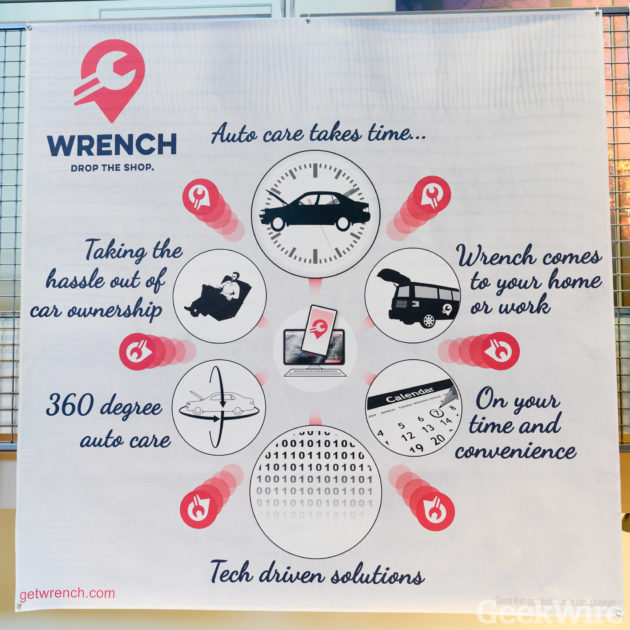 Late last year Wrench, which brings car mechanics directly to customers, made another prestigious GeekWire list: the Seattle 10 collection of the most exciting and groundbreaking startups from the Seattle region. Now it is climbing up the GeekWire 200 list, rising 12 spots to number 167 this month.

Wrench CEO Ed Petersen told GeekWire that in 2018 “we want to grow, and we want to grow really fast.” Wrench certainly seems to be on track there.

Wrench has dramatically expanded its reach from four main cities — Seattle, Portland, San Diego and Phoenix — to establish a significant presence in eight states. GeekWire’s own Clare McGrane tried out the service on a rainy February day and had a positive experience. The mechanic even fixed a few mistakes from a previous repair.

Coming off our second GeekWire Cloud Tech Summit, it feels right to highlight a cloud startup this month. Igneous Systems was among the fastest moving cloud companies, climbing 15 spots to number 171 on our list this month. Igneous is coming off a $15 million raise in January, bringing its total funding to $41.7 million.

Igneous makes a hardware appliance designed to store massive amounts of unstructured data that it installs and manages inside customers’ data centers, promising better performance and simpler maintenance. The company said earlier this year it plans to increase its current headcount of around 50 employees by 50 percent in 2018, mostly in sales and marketing.

Here are the other big movers in June:

Nine startups made their debut on the GeekWire 200 or returned to the list in June. They are: Storm, Kollective Technology, Amperity, Fiind, Alegion, Peach, Pixvana, ClassifiedAds.com and TraceMe.