PITTSBURGH — The stunning 14-foot cross suspended above the altar at Trinity Episcopal Cathedral was constructed of steel, glass and aluminum in the 1960s, symbolizing the city’s major industries of the time.

“I’ll bring that up,” joked William Kaiser, Trinity Cathedral’s 81-year-old docent, laughing at my suggestion during a tour of the 146-year-old building in downtown Pittsburgh after Holy Eucharist on Sunday morning.

The rise of technology played a key role in Pittsburgh’s resurrection following the decline of the once-booming U.S. steel industry. Now the focus of the region is turning to Amazon’s $5 billion second headquarters, an unprecedented corporate prize that promises to bring 50,000 employees to the winning city.

When it comes to its Amazon bid, Pittsburgh is dealing with plenty of non-believers. Sizing up the Rust Belt city against Amazon’s request for proposals, many skeptics think Pittsburgh doesn’t have a prayer in the competition, despite its status among the 20 finalists for Amazon’s HQ2.

“Amazon coming will make Pittsburgh alive again,” said The Very Rev. Scott Quinn, a Pittsburgh native, speaking like someone with an inside track on the outcome, when asked Amazon HQ2 during coffee hour on Sunday.

Trinity Cathedral, which has room for 700 people at a single service, is itself a reminder of Pittsburgh’s capacity for a major influx of people. A few dozen parishioners were scattered among its mahogany pews for the 10:30 a.m. service. Communion was completed in less than two cycles at the altar rail. Without enough singers in the congregation, the church brings in students from Carnegie Mellon University to help fill out its choir. 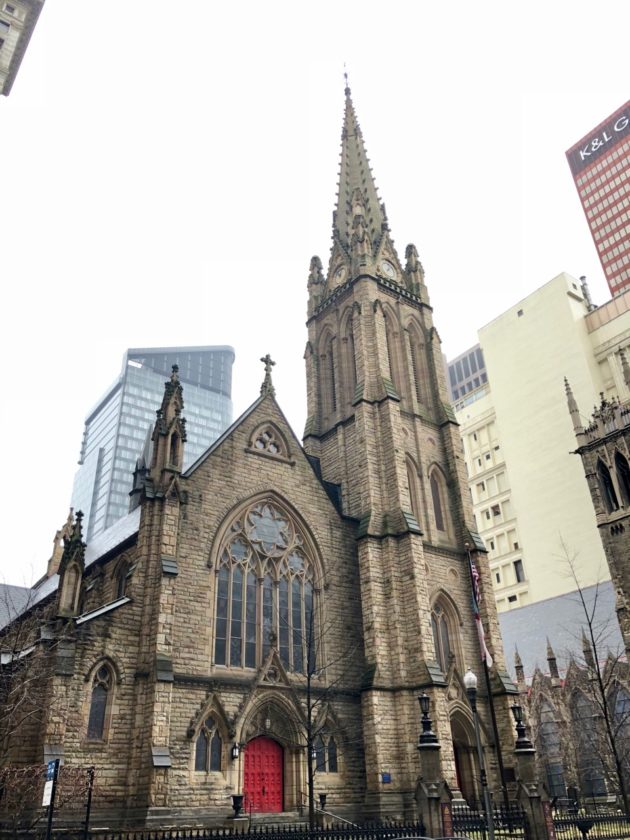 The steel, glass and aluminum cross isn’t Trinity Cathedral’s only reminder of Pittsburgh’s industrial past. A small, sooty section of the building’s exterior has been purposefully left uncleaned — a stark demonstration of the time when steel mills ruled this town and polluted the air.

Amazon wouldn’t bring smokestacks, but growth on its scale promises to have a major impact wherever it puts HQ2, especially in a smaller city such as Pittsburgh.

Over the past decade, as Amazon and other tech giants have expanded in the company’s first hometown, Seattle’s median home price has risen 54 percent, from less than $500,000 to $750,000. Traffic problems and rising rents have come with Amazon’s growth from a few thousand employees to more than 40,000 people across dozens of Seattle towers and buildings.

Pittsburgh isn’t dealing with those issues, yet. But the city has problems of its own, including aging infrastructure and a declining population that has resulted in a significant labor shortage. Carnegie Mellon and the University of Pittsburgh give the city a pipeline of tech talent, but even with the arrival of Google, Uber and others in the city, it can still be a challenge to keep those workers here.

It’s the most wonderful city. It has wonderful people in it. Not just Steeler fans. People that just love the city like I do. I wouldn’t want to live anywhere else.

Built for more than 700,000 people at the peak of the steel era, Pittsburgh now has a little more than 300,000 residents. In an interview with GeekWire last week, Mayor Bill Peduto pitched that capacity as an asset, but it’s not clear how much of the unused infrastructure could be effectively repurposed to accommodate Amazon or other companies.

Tech workers in general are notoriously secular, so even if Amazon does pick Pittsburgh for HQ2, the direct impact on churches such as Trinity Cathedral would probably be limited. However, the broader population would also rise to construct the campus, build new infrastructure and provide services to Amazon employees. 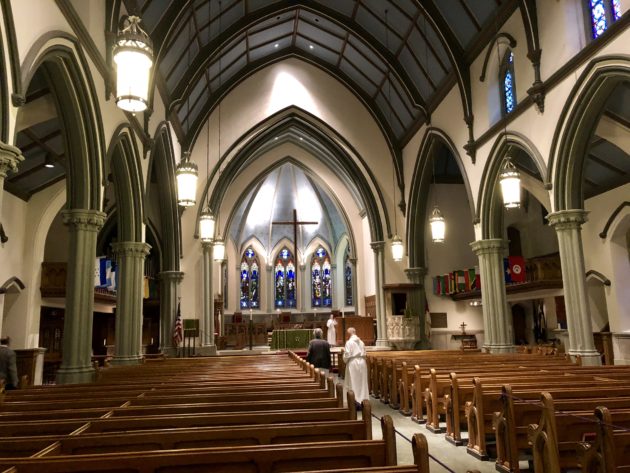 Trinity Cathedral docent Kaiser, a retired undertaker, proudly showed off the church during our impromptu tour, including the ornate font where he was baptized as an infant, and the choir room that was a favorite of Christopher Nolan when the director chose Trinity as a setting for the 2012 Batman movie, The Dark Knight Rises.

Kaiser plans to have his ashes interred in the columbarium in the corner of the church, just off the Sixth Avenue entrance. A longtime member of the choir, Kaiser recalled with a laugh, “I said to the priest, ‘I’ll be able to hear the music every Sunday,’ and he said, ‘Yeah, and the sermons, too.’ ”

So what would Kaiser tell Jeff Bezos about Pittsburgh if the Amazon CEO were to visit his beloved church?

“It’s the most wonderful city,” he said. “It has wonderful people in it. Not just Steeler fans. People that just love the city like I do. I wouldn’t want to live anywhere else.”

From his lips to Amazon’s ears.