Fans lined up under grey skies outside KeyArena. A buzz began to build as the smell of popcorn and hot dogs filled the concourse. The roars electrified the stadium as hometown favorite Kevin Durant dazzled on the court.

For a brief few hours on a cool fall evening in Seattle, it was as if the NBA had never left town a decade ago ― a symbol of the team that was lost, and the league that could someday return again.

This booming city hosted an NBA game Friday night for the first time since the SuperSonics relocated to Oklahoma City in 2008, as the Golden State Warriors torched the Sacramento Kings, 122-94, in front of a sold-out crowd of 17,072 that welcomed men’s pro basketball back to Seattle for one fleeting night.

In the ten years since the Sonics left town in an ugly divorce, Seattle has boomed. A surging tech economy helped make it one of the country’s fastest-growing cities. Amazon’s headquarters has gone from a drawing board to massive urban campus, with more than 40,000 workers going in and out of the neighborhood just nearby KeyArena. It is surrounded by out-of-town tech giants such as Google and Facebook and a strong ecosystem of homegrown tech startups ― along with homelessness, traffic and other challenges that have accompanied such fortune.

So much has changed in Seattle, for better or worse, but one aspect remains constant: NBA fans long to have a team here.

That was crystal clear on Friday night. All eyes were on Durant, the Warriors star who played his first season in Seattle, winning Rookie of the Year honors in 2008 before moving with the team to Oklahoma City.

He made his stance on the NBA in Seattle clear.

“They need to bring [a team] back,” Durant said after scoring 26 points, including several signature jump shots and big dunks that drew oohs and aahs from the fans. “We’re going to keep saying it until it happens. All of us in here, everyone in that arena, every NBA player knows it, so hopefully the NBA does what it’s supposed to do.”

Even though Durant only played one season in Seattle, it’s always been a special place for the 2018 NBA Finals MVP. His connection to the city remains strong, as evident by the throng of fans asking for an autograph, the raucous cheers he received all night long, and his specially-made green Nike “KD” shoes.

The moment of the night came during player introductions, as Durant surprised everyone by wearing a Shawn Kemp jersey, an ode to the former Sonics superstar.

The moment @KDTrey5 came out in a Shawn Kemp jersey during player introductions. I don't think anyone knew it was coming. pic.twitter.com/WibcptoeGK

Warriors head coach Steve Kerr, known to take a stand on certain national and global issues, also voiced his opinion — both verbally and with a pre-game t-shirt.

“I’m hoping the Sonics return some day,” said Kerr, the former Chicago Bulls sharpshooter who has guided Golden State to two straight championships. “This is my way of supporting that cause.”

It was a who’s-who from Seattle’s sports scene on the sideline seats. Russell Wilson and Bobby Wagner from the Seahawks; Sue Bird and Brianna Stewart from the Storm, who just won the franchise’s third WNBA championship; Seahawks head coach Pete Carroll and Mariners manager Scott Servais; and Sonics legends from years past all came to watch on Friday. Homegrown ballers such as Jamal Crawford and Brandon Roy were there; even music star Macklemore came out, as his music and Sir-Mix-A-Lot boomed on the loudspeaker throughout the evening.

“This was different,” Kerr said afterward. “I think anybody who’s been in the league a long time has a soft spot for Seattle just because the history of the franchise and the beauty and the brilliance of the city. It just doesn’t seem right that the Sonics aren’t part of the NBA. That naturally brings out a lot of nostalgia and sentiment. When you bring all the coaches, and former players, and you see the highlights on the scoreboard, you see all the jerseys in the stands, it was a very special atmosphere, very different from anything I’ve ever experienced.” 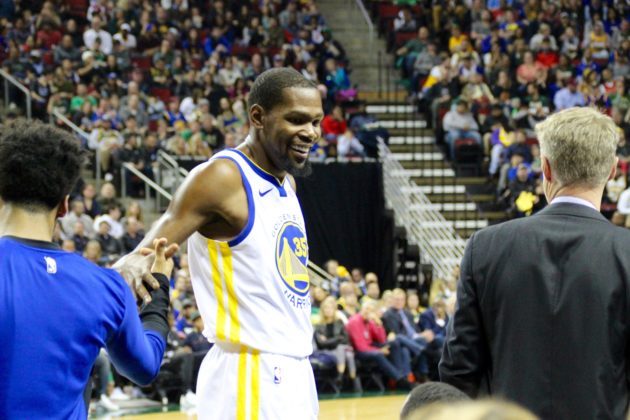 Seattle is an attractive city for professional sports and wealth continues to be created. That’s partly why the NHL is likely to expand to Seattle by 2020 after a KeyArena redevelopment project that begins shortly.

But getting an NBA team back could be a long ways away. ESPN reported this week that a Sonics return may not happen until 2025 at the earliest.

Until then, Seattle will be waiting and ready.

“We know it’s a one night thing, but it felt good again,” ESPN reporter Kenny Mayne, who grew up in the Seattle area, told GeekWire as he left KeyArena on Friday. “Enough time has passed where it’s obvious this is a great market for the NBA. It was obvious a long time ago.” 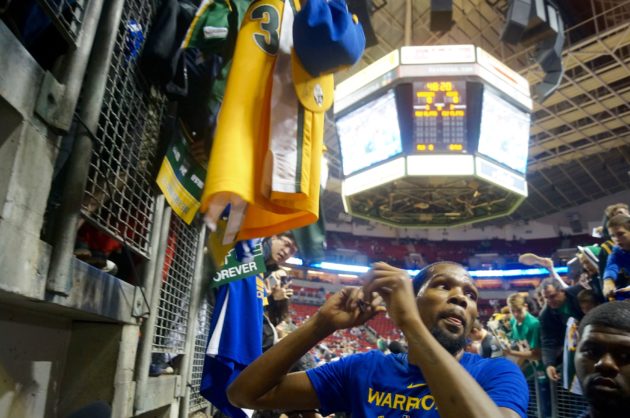