Amazon Web Services yet again powered the company’s financials in the second quarter, posting more than $6 billion in quarterly revenue for the first time, up 49 percent over a year ago.

Analysts surveyed in advance by Yahoo Finance expected Amazon to post earnings $2.50 per share on $53.3 billion in revenue.

Amazon stock is up close to 3 percent on the results of its second quarter, erasing a big loss during the day as skittish investors worried about Facebook’s plunge following a poor earnings report.

In the earnings release, Amazon CEO Jeff Bezos called out the company’s digital brain Alexa, which is now up to more than 45,000 skills, and some of the Alexa-powered devices that came out during the quarter.

“We want customers to be able to use Alexa wherever they are,” Bezos said. “There are now tens of thousands of developers across more than 150 countries building new devices using the Alexa Voice Service, and the number of Alexa-enabled devices has more than tripled in the past year. Our partners are creating a wide variety of new Alexa-enabled devices and experiences, including soundbars from Polk and Sonos; headphones from Jabra; smart home devices from ecobee and First Alert; Windows 10 PCs from Acer, HP, and Lenovo; and cars from automakers including BMW, Ford, and Toyota.” 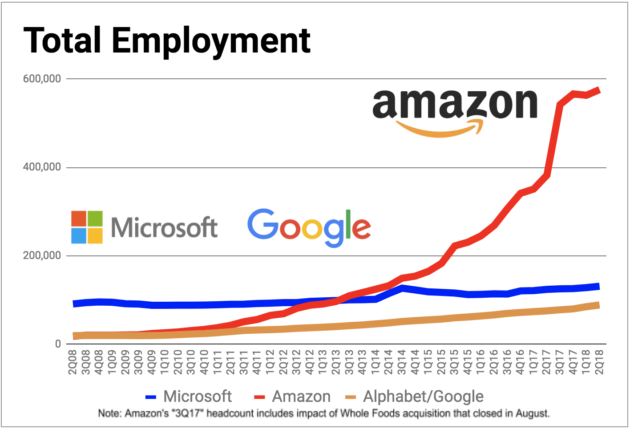 Amazon’s headcount to end the second quarter was 575,700, bouncing back from the first drop in employment in years last quarter. Amazon CFO Brian Olsavsky said on a call with reporters that the company has slowed its external hiring, and most of the activity in recent months has come from internal transfers as part of “re-leveling” throughout the company.

It was another quarter full of big news, announcements and new businesses for the tech giant. One of the most important developments of the quarter was the unveiling of a new program to help entrepreneurs set up and run delivery operations for items purchased on Amazon.

On the healthcare front, Amazon acquired Boston-based PillPack, an online pharmacy that ships pre-packaged doses of medication straight to customers’ doors for a price tag reported to be near $1 billion. We also learned that Boston will be the home of Amazon’s joint health venture with JPMorgan and Berkshire Hathaway, and it will be run by surgeon and Harvard Medical School professor Dr. Atul Gawande.

The one-year anniversary of Amazon purchasing Whole Foods Market passed in June. And the companies celebrated by expanding the new Prime member benefits package to Whole Foods stores across the country.