It sure does look like Amazon Web Services is going to turn into a nice business for Amazon.

RELATED: Amazon posts record profits again even as revenue of $56.6B falls short of expectations 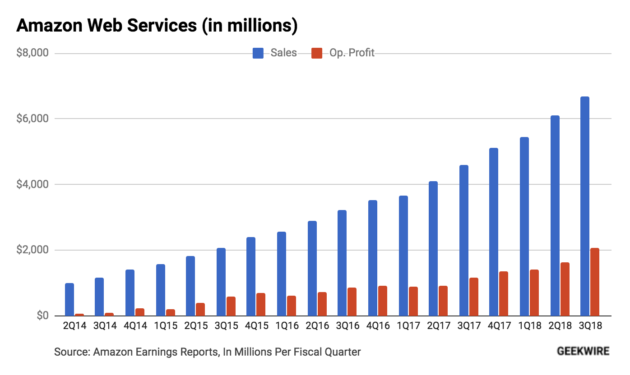 Operating income increased 77 percent to $2.1 billion, up from $1.2 billion a year ago, which was once again a major part of the overall company’s quarterly profits of $2.9 billion.

AWS has been able to keep its operating costs relatively low over the past quarter thanks to “better efficiencies” across its network of data centers, said Brian Olsavsky, Amazon’s chief financial officer, on a conference call with the media after the release of the results. Operating margin increased to 31 percent, and capital leases — which is how AWS acquires the buildings and equipment needed to make the cloud work — are up only 9 percent this year, compared to an increase of 69 percent over a trailing 12-month period, he said.

Analysts were expecting AWS to record $6.71 billion in revenue, slightly higher than the actual number, according to CNBC. Investors were not happy with Amazon’s report, sending its stock down 6 percent in after-hours trading, although that momentum seemed centered around weaker-than-expected guidance for the retail giant going into the holiday quarter.

“This growth rate is going to bounce around,” Olsavsky said, in response to a question about the sequential decline in revenue growth. But he noted that AWS is on pace to record $26 billion in revenue this year, which is 55 percent higher than the $18 billion annual revenue pace the group was on as of this time last year.