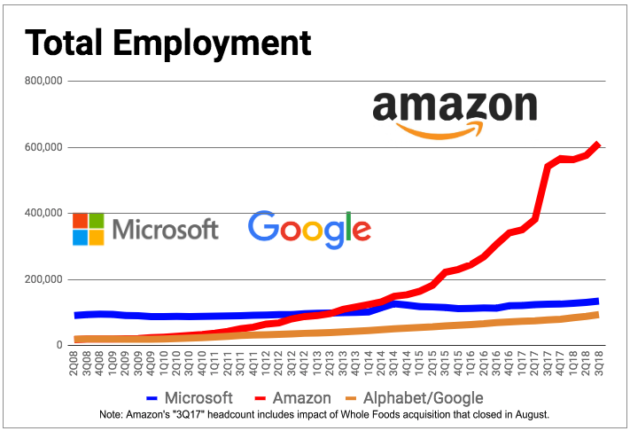 The number of Amazonians continues to rise, and the tech giant has hit a milestone of more than 600,000 employees around the world for the first time.

Amazon now employs 613,300 people worldwide, according to its quarterly earnings report disclosed Thursday. That figure, which represents full-time and part-time workers but excludes contractors and temporary personnel, is up from 575,700 last quarter and 541,900 a year ago. Amazon has roughly doubled its headcount in the last two years, when it reported 306,000 global employees

Amazon’s employee base is up 13 percent over a year ago. That is a big drop in annual growth from the past few quarters when headcount grew by rates ranging from 51 to 77 percent. A big reason behind that was the absorption of Whole Foods Market and the 87,000 people who work there. With some more distance from the Whole Foods acquisition, employee growth numbers will slow from the big jumps in recent quarters but line up better with what’s actually happening at the company.

RELATED: Everything you need to know about Amazon’s $15 minimum wage

Close to two-thirds of Amazon workers are about to get a raise. On a call with reporters, Amazon CFO Brian Olsavsky said about 400,000 employees will be affected by a promise made last month to bump the company’s minimum wage to $15 an hour for all employees, including part-time and seasonal workers.

Olsavsky said Amazon has baked the wage increases into its fourth quarter guidance, which came in under investor expectations, but he would not quantify its impact on the company’s financials.

To put Amazon’s growth in perspective, there are now more people working for the tech giant than people living in Baltimore (601,000) or Milwaukee (586,000). In the next couple quarters its workforce will could be bigger than cities like Memphis, Las Vegas and Portland.