TAYLOR’S TAKE ON THE WEEK IN SPORTS TECH: Inflating a soccer ball or football with the exact amount of air doesn’t seem like a huge deal. But whether it was the controversy that arose from “Deflategate” or the damage an overinflated soccer ball can have on a teenager’s head, accurate gauge pressure is actually quite important. 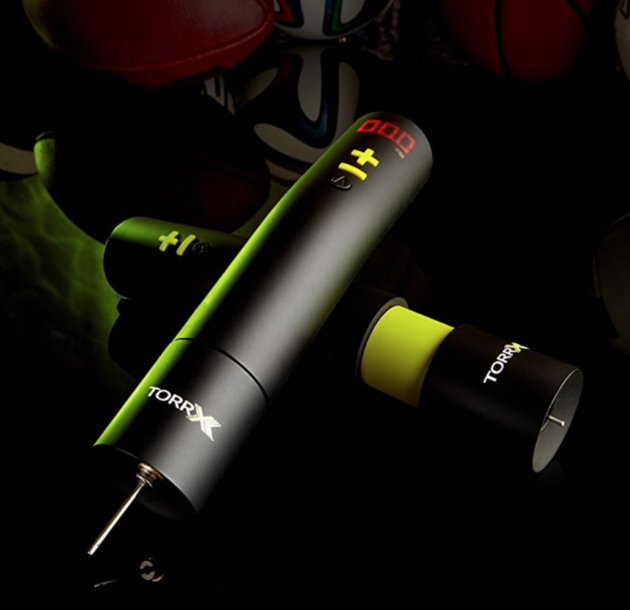 That’s why TorrX is finding early traction with its high-tech ball pump that has a built-in gauge and LED screen, making it easy to quickly inflate or deflate a ball to a precise pounds per square inch (PSI) measurement.

Customers from around the world at all levels of soccer, from Major League Soccer to NCAA to leagues in Europe, are using the pump. The Seattle-area startup is focusing initially on soccer, but basketball, volleyball, rugby, and water polo teams have purchased its product. The company has validation from athletes like James Riley, a former Seattle Sounders FC defender who is building a youth soccer coaching program.

“I have seen a lot of products come and go during my college and MLS career, but I really believe TorrX is the pump of the future because it is so accurate, easy to use, and durable,” he said in an email.

Former U.S. Olympian and World Cup hero Brandi Chastain, who is now an assistant coach with the Santa Clara women’s soccer team, also vouched for the pump, particularly with concerns around head safety. She uses it to get the right weight of the ball, depending on player age.

“As a coach, and parent, having the proper air pressure in the ball reassures me that the players and my kids will be safe,” she said. “Anything we can do to help lower the number of concussions, the better.”

Tom Neir, a veteran entrepreneur and City of Kirkland councilmember, came up with the idea for TorrX with his co-creator Sally Otten, who previously co-founded Pacific Coffee Co. and is a partner in the Cow Hollow Associates consulting firm.

“Now, there is really little excuse for a ball that is under or over inflated,” he added. “Coaches/referees/league or match management can now become much more specific about what constitutes a perfectly inflated ball for their sport and be sure the standard is easily adhered to.”

The pump can inflate 50 soccer balls on one charge. It designed to get better over time, with algorithms that learn how to get the PSI more and more accurate with each use.

The pump is currently available on Amazon but TorrX is exploring other sales channels. The company is bootstrapped and employs less than ten people in the Seattle region.

Thanks for tuning in, everyone!  — Taylor Soper