As the arm reached across to block my entry, I looked up, surprised.

“I have a conference badge,” I recall saying, struggling to keep up with my former edtech industry colleague who had just been allowed to enter through the same ballroom door. “I only wanted to hear the former President speak.”

This series by contributing writer Frank Catalano examines the evolution of digital content, from creation to consumption, and the technology transforming it.

“You have a media badge,” the event staffer corrected. “No media are allowed in. We were just told.”

Beyond her arm, I could see a slide appear on the huge ASU+GSV Summit stage screen. No audio recording, it instructed. No photography. No note-taking. Put away that mobile device.

This in a room packed with hundreds of technology industry investors and executives. Admittedly it was education technology, but no one was meekly walking in with a no. 2 pencil and a composition notebook in hand.

We were about to witness, however, a textbook case of the futility to try and control media in the age of social media.

While I sat outside the closed ballroom doors being told by an event organizer minutes later that the media restrictions were part of a keynote speech contract rider with Bush, the tweets from inside began.

These weren’t surreptitious. Most tagged the event or the official @ASUGSVSummit Twitter handle. And there were a lot of them, a steady stream with quotes and pictures.

Listening to President Bush tonight at #ASUGSV2018 : “The Office of the President is more important than the person sitting in that Office.” pic.twitter.com/WE5OryNARU

"No Child Left Behind was great civil rights legislation of our time." – George Bush. "?" – a room full of educators. #ASUGSV2018 #educationreform

After the real-time social media coverage ended, more traditional news media coverage began to appear. Education Week, generally considered the news outlet of record for education, was the first with a full story. That was followed by more detailed coverage of Bush’s “no note-taking” talk that was even re-tweeted by the conference Twitter account itself. 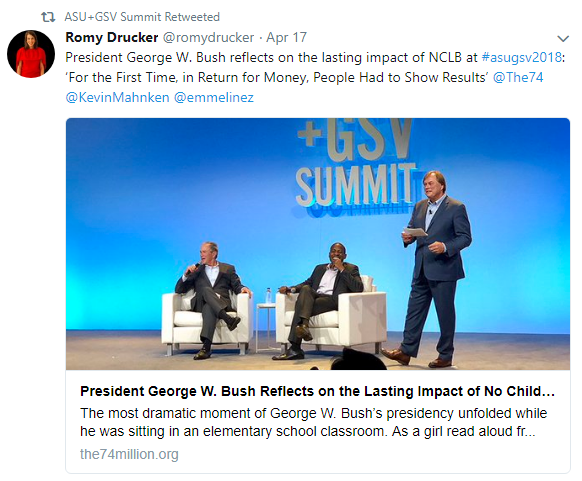 So clearly, media coverage was okay. Just not media attendance. Or maybe it was simply impossible to prevent either.

Other journalists wearing media badges confirmed to me that they, too, were surprised and barred from entering. However, one reporter said he walked right in. Since he was also a conference speaker, it wasn’t obvious whether he had a different, and not a forbidden salmon-colored media, badge.

Now, are there potentially valid security, capacity, and contractual reasons for a conference like ASU+GSV Summit to be selective in admission to an event? Sure. I’d argue it’s even a responsibility. On the whole, last month’s conference was well-run and extremely well-attended, probably among the best organized I’ve experienced in three decades of going to tech summits.

But, from a journalist’s standpoint, could this have been handled better by the Summit’s organizers? Absolutely.

So @ASUGSVSummit has decided, at the last minute, not to let anyone with a Media badge into the opening keynote with George W. Bush. No warning. Just turned away at the door. As Captain Hook would say, "bad form!" #ASUGSV2018 #edtech

The conference had a list of all registered media. If indeed true, as I was told, the media restriction was part of W’s speaking contract (former President Barack Obama apparently had a similar, controversial restriction on a talk he gave earlier this year), it would have been easy to email media registrants in advance and tell them their free badges didn’t allow them access to the Bush talk. Or set ground rules for those who did want to attend the keynote. That seems an oversight in this particular instance.

But the real story here is that social media were triumphant in trumping any and all restrictions. This high-powered tech conference and a former world leader couldn’t stop it.

It’s unlikely this experience was an outlier or will decline. Pew Research Center noted earlier this year that a majority of American adults now use Facebook and YouTube, and a quarter use Twitter. Among the youngest adult audience, Twitter use rises to nearly half. And no one needs to point out the near-ubiquitous reach of social media app-bearing smartphones carried into all events, from sports to speeches.

The anachronism isn’t the insistence on no note-taking. It’s the flawed assumption that credentialed media are still the only media that matter.