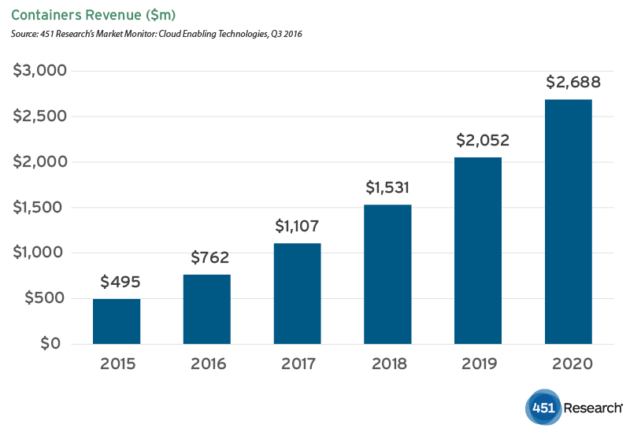 The move toward containers — bundled application components that simplify developing and deploying software across different platforms and devices — is a veritable phenomenon that will enjoy continued popularity and quick growth, said respected research firm 451 Research in a recent report.

Containers got a lot of attention last year, with market-leading Docker releasing important new versions of its software and Amazon Web Services entering the market for container management with Blox, a challenge to market-leading container orchestrator Kubernetes.

The market for containers will grow at a 40-percent compounded annual rate to $2.7 billion in 2020, from $762 million last year, making it the fastest-growing piece of what 451 Research has started calling the cloud-enabling technologies market, the company said.

This is an impressive adoption growth profile for a technology that has only been in the enterprise for a few years.

That entire market also includes virtualization, private platform-as-a-service offerings and other automation and management software. It’s estimated to be worth about $23.1 billion now and will grow at a 15-percent rate to reach $39.6 billion in 2020.

451 Research said the container market can be compared to that of OpenStack, because both are based on open-source software and both receive care and development from startups and established companies alike. But containers are likely to grow far faster than OpenStack, which represented a market of $1.8 billion last year and, despite challenges, will grow at a healthy compounded annual rate of 35 percent to hit $5.8 billion by 2020.

“Two things stand out from our research on containers,” said Greg Zwakman, 451 Research’s VP of market intelligence, in a release. “One is the breadth and diversity of vendors basing their offerings on containers or integrating and partnering to better support containers in their products. The second is the speed at which the container software and market are maturing based on production, use and revenue growth.”

451 Research is tracking 125 container vendors and said it expects new market entrants. For purposes of comparison, in the three years it’s been tracking the OpenStack market, that market has grown from 30 vendors to more than 90. Significant revenue for container vendors is just starting to emerge.

In a survey of enterprise IT buyers conducted last spring, among the roughly 25  percent who use containers, 34 percent were in broad implementation of production applications, and 28 percent had begun initial implementation of production applications with containers. “This is an impressive adoption growth profile for a technology that has only been in the enterprise for a few years,” 451 Research concluded.