There are great rivalries — Yankees and Red Sox, Duke and North Carolina, Amazon and Walmart, Uber and Lyft — and the Pacific Northwest tech scene has one of its own. The top of the GeekWire 200 for years has been dominated by two companies: DocuSign and Redfin. And there’s a new #1 on the ranking.

Redfin has dethroned DocuSign this month to take over the number one spot in the GeekWire 200 list of the top privately held Pacific Northwest startups. DocuSign ascended to the top of the list for the first time in December 2014 after Seattle gaming company Big Fish was removed from the list when it was sold to Churchill Downs, and never relinquished that spot until this month. 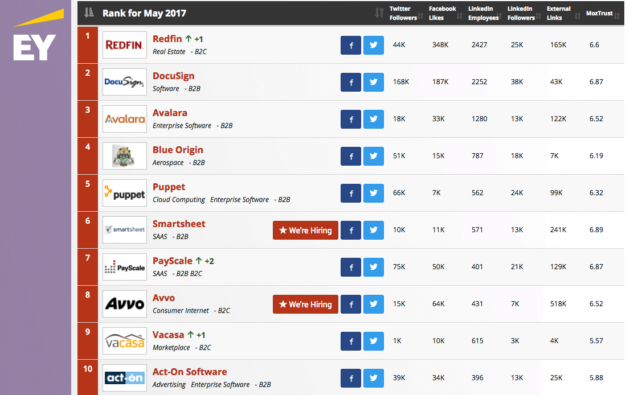 But with whispers of a potential IPO, it’s possible the company’s time at the top of the list could be short-lived. Unsurprisingly, Redfin is staying quiet about the possibility of an IPO and declined to comment.

Following Redfin in May are DocuSign, Avalara, Blue Origin and Puppet. Other top 10 movers include PayScale, which climbed two spots to number seven, and Vacasa, up a single spot to number nine.

Click for the full May update to the GeekWire 200 and continue reading for highlights.

Technology consultant 47 Degrees is heating up. The company, with offices in Seattle, London and Spain, was the biggest riser this month, up 38 spots to number 160. Part of that was due to changes on our end, but the company’s LinkedIn employee count has risen quickly in 2017 from 26 in January to 36 this month.

Some of those hires include personnel focused on business development, developers, software engineers and more.

Fast-growing cloud-based communications platform Spoken Communications made a couple of key hires so far this year, and that helped push the company up eight spots on the list to number 91. In March, the company announced the addition of Jan Wiersma as its chief cloud officer and COO. Wiersma comes to the company from language translation technology company SDL, where he had worked for five years, most recently as the company’s vice president of global cloud services.

That move came a month after the company added Brian Silverman to be its executive vice president of sales. Silverman has more 25 years of experience in sales, marketing and executive management, and he was a co-founder and CEO of call center provider Five9, which he helped take public in 2014.

Shiftboard, a Seattle-based company making mobile scheduling and workforce management products, has been making moves. The company raised $4 million in March 2016, and previously told GeekWire it set records for revenue and new customers that year. These moves combined with the recent addition of two executives to its leadership team helped propel the company up the GeekWire 200, and this month it rose 10 spots to number 118.

SheerID makes software that helps companies verify the identity of certain customer groups, and in March it landed $2.9 million, bringing its total funding to date to $16 million and pushing the company up 10 spots to number 148 on the list. Plus it is based in my hometown of Eugene, Ore., so that’s worth a few points on its own.

SheerID helps more than 160 customers like Amazon, Costco and Best Buy verify the identity of people within specific groups — like veterans, teachers, or college students — so they can receive special offers. For example, it works with Spotify to help verify college student discounts.

Here are some of the other big movers in May:

Seven startups made their debut on the GeekWire 200 or returned to the list in May. They are: Adaptiva, Fleet, Karat, Mighty Ai, AxonVR, Entomo and Her Interactive.

The GeekWire 200 — sponsored by our partners at EY — is derived from our broader list of more than 900 Pacific Northwest tech startups. The list is designed to provide a better understanding of the startup landscape in the Northwest.