Seattle-based Big Fish Games, one of the largest privately-held tech companies in the Northwest, has agreed to be be acquired by Churchill Downs Inc. for $885 million.

Churchill Downs Inc. is a publicly-traded company that operates the famous Churchill Downs horse racetrack in Louisville, home to the legendary Kentucky Derby. It also owns six casinos, a video poker business, an online wagering business, and a bevy of other holdings.

In a statement, Big Fish founder and CEO Paul Thelen said that Churchill Downs is a “great cultural fit for us.”

“We are extremely proud of the company we have built over the last twelve years,” Thelen said. “Churchill Downs is a company with a commitment to interactive entertainment and a track record of growth and performance. We believe Big Fish is now positioned to become an even greater force in the casual, mid-core and social casino mobile and online games industry.”

On the surface, it may seem peculiar that Churchill Downs is gobbling up Big Fish.

But the famous race track operator, which employs more than 4,500 and has 10 offices across the country, actually maintains a large online horse racing wagering business called TwinSpires and runs slot-machine gaming and video poker machines at some of its racetracks. Big Fish sells a number of casino-oriented games, everything from Vegas Penny Slots to Mystic Palace Slots to Gallop for Gold, a horse racing-themed casino game. Its Big Fish Casino was the top revenue producing social casino app on iOS last year, and the company’s casino games ranked 4th in total market share in the category behind Zynga, IGT/DoubleDown and Caesar’s Interactive.

Social casino games are estimated to be worth roughly $2.7 billion worldwide, according to a report from Eilers Research.

With the acquisition of Big Fish, Churchill Downs obviously wants to get into the race.

The companies declined to make executives available for comment in advance of a conference call Thursday morning. The news release makes no reference to the status of Big Fish Games’ ongoing operations in Seattle, but a spokeswoman tells GeekWire that the operation will remain intact and all 622 employees wordwide will remain once the deal is finalized. (Editor’s note: This post has been updated with more current information).

Big Fish raised $83 million from Balderton Capital in 2008, and it had been discussed for years as a possible IPO candidate. But the company never produced a big hit in the mobile or social gaming realm, passed by companies such as Zynga (with Farmville) and Rovio (with Angry Birds). That didn’t seem to bother executives at Churchill Downs.

“They have never had the mega-hit game, and we actually like that,” Churchill Downs CEO William Carstanjen said in Thursday’s conference call.

Missing out on a huge blockbuster game has allowed Big Fish to build a sustainable and diverse business over time, with Carstanjen singling out the “seasoned” management team and “consistent” results. Gross bookings at Big Fish stood at $278 million last year, and Thelen is poised to make a $50 million “founder bonus” if he can grow the company to $1 billion in gross bookings by the end of 2016.

“Mobile and online games is a large, competitive and sophisticated segment,” said Carstanjen. “Scale matters. Game development expertise matters. Distribution scope matters. Marketing analytics and experience matter. We don’t think we could expect to be successful dipping a toe into the water, and we felt we needed to go big and start with scale, team and with more expertise and experience.”

We believe Big Fish is now positioned to become an even greater force in the casual, mid-core and social casino mobile and online games industry.”

Big Fish was founded in 2002 by Thelen, a former RealNetworks employee who holds an MBA from Stanford and an electrical engineering degree from the University of Washington. By 2011, the privately-held company reported $180 million in revenue and boasted about 700 employees. Thelen resumed the CEO post in 2012, attempting to launch the company’s streaming gaming efforts. However, by 2013, Big Fish had pulled the plug on the cloud games business and announced a number of layoffs, including the closure of facilities in Ireland and Canada.

The acquisition marks one of the biggest in Seattle’s vibrant gaming community, joining the ranks of IGT’s purchase of DoubleDown Interactive for as much as $500 million in 2012 and EA’s purchase of PopCap Games for up to $1.3 billion in 2011. It also helps cement Seattle’s role in the social casino gaming space. 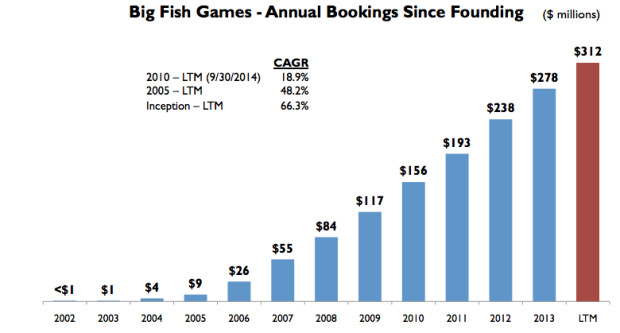 “Seattle has long been a major center for casual game development,” said Derrick Morton, the CEO of Seattle gaming startup FlowPlay and, like Thelen, a former RealNetworks employee. “The sale of Big Fish Games to Churchill Downs is just another example of how Seattle game companies are building valuable businesses. We often don’t get the credit we deserve in comparison to Silicon Valley, but it’s clear that, while we don’t get the buzz, we definitely attract the benjamins.”

Susan Lusty, a spokeswoman for Big Fish, said that Churchill Downs plans to retain all employees. Big Fish employed 495 workers in Seattle as of last week, not including 47 contractors. It employed 622 people worldwide, including offices in Oakland and Luxembourg.

Follow-up: Why the Kentucky Derby’s owner is sprinting into the games business with a huge $885M buy of Big Fish

LOUISVILLE, Ky. (November 12, 2014) – Churchill Downs Incorporated (NASDAQ: CHDN) (CDI) and Big Fish Games, Inc. (Big Fish), one of the world’s largest producers and distributors of mobile and online games, announced they have entered into a definitive merger agreement under which CDI will acquire all of the outstanding stock and equity interests of the privately held Big Fish.

The transaction is structured on a cash-free/debt-free basis and is valued at up to $885 million, including a base consideration of $485 million and a potential earn-out payment of up to $350 million based on 2015 Adjusted EBITDA, and a potential bonus payment to the founder and current Chief Executive Officer of Big Fish, Paul Thelen, of $50 million based on 2016 bookings. The purchase price will be paid in cash, except for approximately $15 million paid in CDI common stock to Paul Thelen.

The upfront payment represents a multiple of approximately 8.5-times Big Fish’s Adjusted EBITDA (including an adjustment for changes in deferred revenue) for the trailing twelve months ended September 30, 2014 of $57.3 million. The earn-out payment will be calculated by applying a multiple of 9-times the increase in calendar year 2015 Adjusted EBITDA over a base value of $51.2 million, except that for purposes of the earn-out calculation the adjustment for change in deferred revenue will be reduced by subtracting expected costs associated with such deferred revenue.

The merger, which has been approved by the Boards of Directors of both companies, is conditioned upon receipt of required regulatory approvals and other customary closing conditions. Subject to the satisfaction of these conditions, the transaction is expected to close by the end of the year.

“The acquisition of Big Fish and our entry into the rapidly growing mobile and online games industry gives us new products, new customers, new geographies and new sizeable growth opportunities,” said Bill Carstanjen, Chief Executive Officer of CDI. “While many will view this transaction as a logical extension to what we currently do with Twinspires.com, what is most important to us are the strong team and the processes and capabilities that have been built by Big Fish in Seattle, Oakland, and Luxembourg. We are excited to announce this transaction and believe we will do great things together.”

Paul Thelen, Big Fish’s founder and CEO said, “We are extremely proud of the company we have built over the last twelve years. Churchill Downs is a company with a commitment to interactive entertainment and a track record of growth and performance. We believe Big Fish is now positioned to become an even greater force in the casual, mid-core and social casino mobile and online games industry. Churchill Downs is a great cultural fit for us and we are thrilled to be joining the Churchill Downs family.”