Seattle’s Big Fish Games today unveiled a new cloud-based gaming service called Big Fish Unlimited that allows game players to participate in games across tablets, PCs, TVs and smartphones, saving the games as participants play. The new $7.99 per month service, launched today in a live demo at the Casual Connect conference in Seattle, includes more than 100 games from a group of 42 developers in the Big Fish library. A free ad-based version with a rotation of as many as 20 games also is being rolled out.

To applause from the crowd at Benaroya Hall, Big Fish’s Will O’Brien showed attendees how a game player can pause a game and shift between a PC and tablet. He also announced a partnership with Roku to bring the gaming service to its streaming media devices later this year.

“When tested with customers, they couldn’t tell the difference between a native game and a streaming game,” said O’Brien, vice president and general manager of cloud gaming at Big Fish. 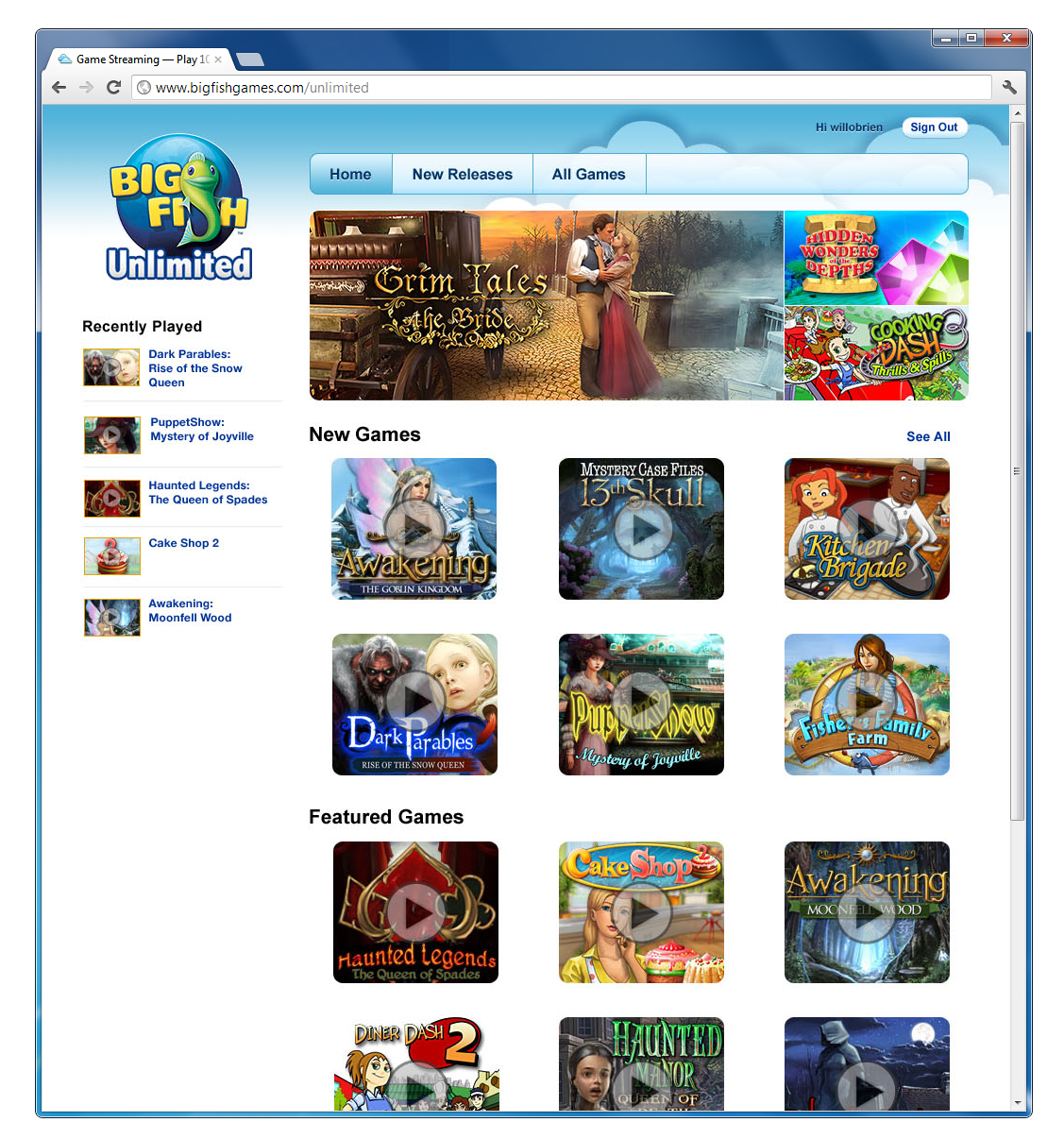 Because the progress of the game is saved in progress and built using HTML5, O’Brien said that someone could wake up in the morning and play a game on their tablet, shift to the PC during lunch and then pick up the same spot in the game on one’s TV that night.

O’Brien boasted that the technology behind Big Fish Unlimited is being rolled out so that developers need to do “zero source code changes.” The service is live today, and comes after Big Fish had some fits and starts in the cloud-based gaming arena earlier this year. (Previously: Apple pulls subscription service from Big Fish Games, removes Play Instantly from the app store).

“It is the future of games, that’s what this day is all about,” said Big Fish Games co-founder Paul Thelen in his keynote address at Casual Connect. “Casual games are ideally suited for this technology.”

With Big Fish Unlimited, Thelen said that a 2GB-sized game can be activated and played in as little as four seconds.

Big Fish remains a juggernaut in what Thelen described as premium casual games, topping $180 million in revenue last year. The 10-year-old game maker — described as a “dinosaur” of the industry — has transitioned into mobile, and now with Big Fish Unlimited, cloud-based gaming. Big Fish is now the fifth top grossing gaming app maker on the iPad, ahead of Zynga.

But Thelen was quick to point out that the PC and Mac businesses are not going away anytime soon.

“The future is mobile, but be very clear the PC and Mac world is huge,” said Thelen, adding that the company plans to help mobile game makers port their games back to the PC and Mac environments.

Here’s a promo that the company showed this morning kicking off the new service.