With Sunday’s unveiling of the Xbox One X, Microsoft is placing its bet on intense graphics. Set to release this coming November, the $499 console supports full 4K HDR and features a 4K UHD Blu-ray optical drive. Meanwhile, the Nintendo Switch has been selling swiftly since its March release, with a unique hybrid home/on-the-go design, distinctive controllers, and games that are sold on cartridges.

Microsoft appears to be much more focused on gaming with the Xbox One X launch than it was with the initial Xbox One launch in 2013. Kinect has become a faded memory, and TV and other media features weren’t featured at all. Their 2017 E3 presentation featured nearly two dozen big-name games, many of which are at least partially exclusive to Xbox One, as well as a rapid-fire montage of indie games.

While Microsoft’s Xbox 360 and Sony’s PlayStation 3 were neck-and-neck in the race to sell the most consoles in the previous generation, Sony has pulled away with a clear lead in the current console generation. Nearly twice as many PlayStation 4 consoles have been sold than Xbox One since both systems were released in November 2013. Nintendo faltered with the Wii U, but seems to be coming back quickly with the Switch. 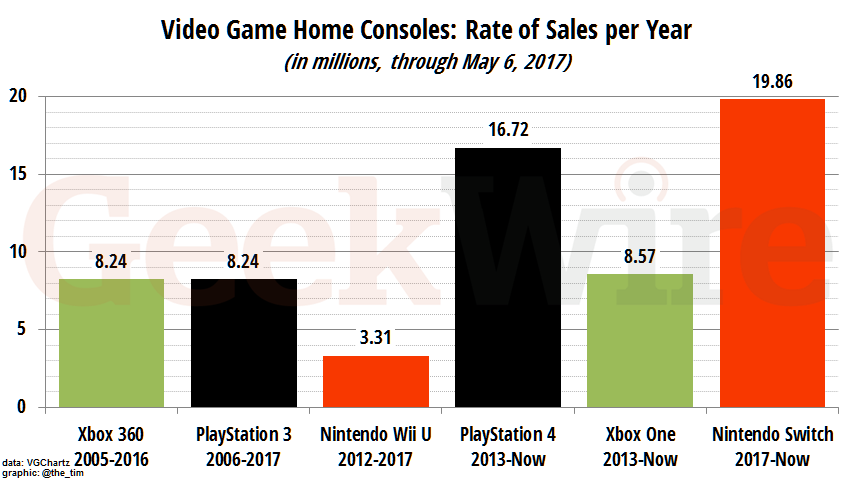 Will the big boost in graphical power and a renewed focus on high-quality triple-A games be enough for Microsoft to make up lost ground against Sony? And will the Nintendo Switch be a serious threat after making a surprisingly strong start of its own?

Nintendo is rebounding hard from the missteps and poor sales of the Wii U. Demand for the Switch has been so strong since its launch that they have doubled their initial production target for its first year.

To add to the huge success of “Zelda: Breath of the Wild,” Nintendo is pushing out a barrage of major titles over the next year, including ARMS this month, Splatoon 2 next month, Super Mario Odyssey in October, new Yoshi and Kirby games next year, and new Pokémon and Metroid Prime games sometime later. Their E3 presentation today was densely packed with enough major game announcements to easily carry the console through 2017 and beyond.

The Switch is also already enjoying something that the Wii U never really had: growing support from major third parties.

Just how much support is Nintendo getting from third parties on the Switch? Well, on Monday Ubisoft led off their E3 presentation with CEO Yves Guillemot inviting legendary Nintendo game designer Shigeru Miyamoto to join him on stage to introduce the Switch exclusive “Mario + Rabbids Kingdom Battle,” a tactical fighter starring Nintendo’s Mario cast and Ubisoft’s “Rabbids.”

It seems that the Nintendo Switch will have a strong first year, likely selling more consoles than the Wii U did in its entire five-year lifespan.

Meanwhile, Sony seems to be comfortable with their current position of market dominance and current hardware offering of the $399 PS4 Pro, which is capable of 4K gaming, although not as powerful as Microsoft’s Xbox One X. Sony’s E3 conference was completely devoid of hardware announcements, focusing instead on a slew of upcoming games, including an exclusive Spider-Man game that looks pretty awesome.

Geared Up: Microsoft’s Xbox One X is powerful, but is it worth the big price tag?

With the 4K PS4 Pro and the portable Nintendo Switch both having a considerable head start, will gamers still be willing to open their wallet for the new Xbox One X come November? Microsoft’s latest offering looks strong, but it may simply be too late for an incremental improvement in graphical capabilities to make a serious dent in the market.

It will be interesting to see how it plays out over the coming year, but regardless of which company “wins” the gaming market, the real winner is the gamers whose gaming options have never been as varied and as deep as they are today.