The latest edition of the Super Mario franchise is coming to Nintendo Switch later this year, and it’s a blend of new worlds, moves, outfits and a hat tip to the game’s past.

Titled Super Mario Odyssey and set to be released Oct. 27, the game was the final in a series of trailers for new Nintendo Switch titles shown at E3 in Los Angeles. The trailer begins with a T-Rex romping through an open field, and just when it looks like a Jurassic Park-type game, we see a peek of Mario’s trademark hat. 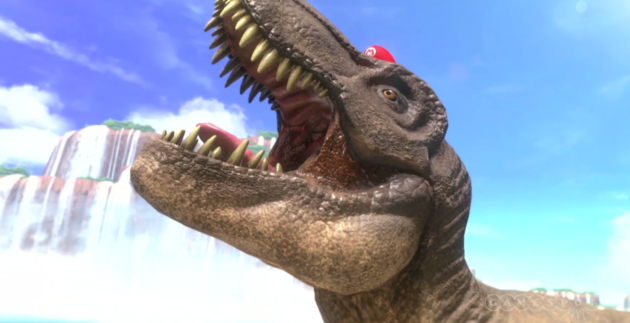 Here is the full trailer:

More than Mario, the hat itself is the centerpiece of the new game. Mario can chuck his cap at baddies in a variety of fashions. It also appears to have the ability to let Mario take on different forms. The trailer showed instances of Mario transforming into a series of his traditional enemies as well as a taxi cab and the T-Rex.

Mario has picked up quite the fashion sense beyond his trademark plumber overalls in the latest game, as the trailer shows him in everything from a white tuxedo complete with top hat to a football uniform to a Mariachi outfit.

Fans of the franchise will note that the game’s 3D setup looks more like Mario 64 (my personal favorite in the series) or Mario Sunshine than the other 2D titles.

The world around everyone’s favorite plumber is different too. Sure there are the traditional stages associated with the franchise, but there is also an urban setting known as New Donk City, another example of the mass migration into cities.

In addition to the new Mario game, Nintendo showed off trailers for new editions of Kirby, Yoshi, Super Metroid and other Nintendo favorites. Other popular games such as FIFA and Rocket League will also soon make their debut on the hybrid console.

The Switch console has been a hit since it was released in March, and it immediately sold out virtually everywhere. In its earnings call last month, officials from videogame retailer GameStop said the company sold more Switch units in the first two months than it did Wiis back in 2006. The Wii is Nintendo’s best-selling, non-handheld console in company history.

Given the positive momentum, it appears Nintendo may be gearing up to increase production. The Financial Times reports that Nintendo has ordered an additional 18 million Switch units to be produced by next March.