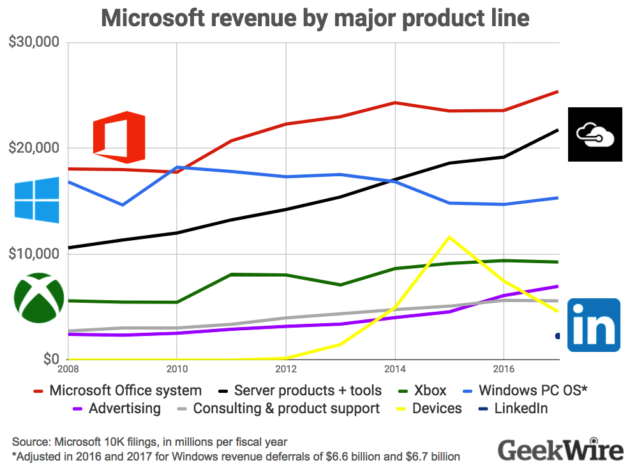 The takeaway: The big Microsoft businesses that have shifted most aggressively to the cloud — its Office and Server product lines — are growing increasingly faster than its Windows PC business. The numbers underscore the importance of the cloud to Microsoft’s future, and provide new insights into the performance of its best-known products under CEO Satya Nadella.

The numbers were disclosed this week in a footnote on Page 92 of the company’s annual 10K regulatory filing, described as “revenue from external customers, classified by significant product and service offerings.”

GeekWire first reported on this footnote last year. The annual disclosure provides a glimpse of Microsoft’s products in the terms by which they’re commonly known to the outside world. The company reports its quarterly results through broad divisions — “Productivity and Business Processes,” “Intelligent Cloud” and “More Personal Computing” — that make it tougher to see specific product performance.

Here are some of the highlights from the new set of numbers:

• Microsoft Office system, including the subscription-based Office 365 productivity suite, brought in $25.4 billion in revenue in Microsoft’s 2017 fiscal year, an increase of 7 percent from the previous year.

• Server products and tools, a category that includes the Microsoft Azure cloud platform, brought in $21.8 billion in revenue, up more than 13 percent.

• Windows was responsible for $15.3 billion in revenue, an increase of 4 percent, after adjusting for revenue deferrals related to the Windows 10 rollout.

• Revenue from Devices, including Microsoft Surface hardware and the company’s first-party Windows Phones, fell steeply to $4.5 billion, from nearly $7.5 billion the year before, largely reflecting the company’s pullback from smartphone hardware.

• LinkedIn’s results make their first official appearance in the 10-K this year, following the completion of Microsoft’s $26.2 billion acquisition of the business social network in December. Since the deal closed, LinkedIn has brought in nearly $2.3 billion in revenue for the company.

• Microsoft’s advertising revenue saw the biggest percentage increase among the company’s major business lines, up 14 percent to $6.97 billion, from $6.1 billion the year before.

Also in the filing this week, Microsoft said its total commercial cloud revenue rose to $14.9 billion for the year, up from $9.5 billion the year before.

This category “primarily comprises Office 365 commercial, Azure, Dynamics 365, and other cloud properties,” according to the company. The $14.9 billion for the year was just ahead of the $14.8 billion Microsoft had forecast for commercial cloud revenue a few months ago.

In another section of the 10K filing, Microsoft breaks down its total employment by category, showing the trends among different types of jobs at the company. The numbers this year reveal a big jump in sales and marketing employment, from 29,000 people last year to 34,000 people as of June 30 — which was prior to Microsoft making an undisclosed number of layoffs in July, largely in sales. 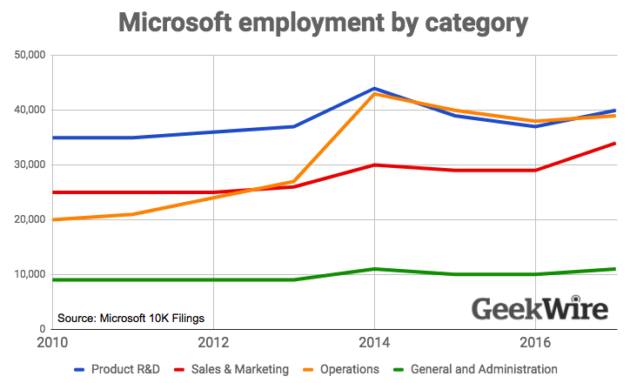 Microsoft said it added a total of about 11,000 employees across all categories as a result of the LinkedIn acquisition in fiscal 2017.

As reported earlier this week, Microsoft’s 10K also puts artificial intelligence into its official vision for the first time, and removed references to a “mobile-first” world, fitting with Microsoft’s recent push into AI and retreat from the smartphone market.

The new vision reads, in part. “We believe a new technology paradigm is emerging that manifests itself through an intelligent cloud and an intelligent edge where computing is more distributed, AI drives insights and acts on the user’s behalf, and user experiences span devices with a user’s available data and information.”

Listen to our Week in Geek podcast for more on the changes at Microsoft.