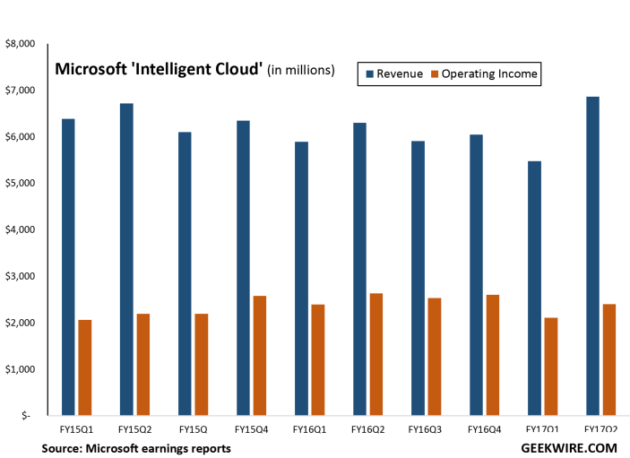 Microsoft’s commercial cloud run rate exceeded $14 billion for the first time during the December quarter, driven by Office 365 and Microsoft Azure — demonstrating continued momentum for the company’s cloud services as it expands beyond its traditional PC operating system and applications businesses.

“We’re very pleased with these results, which show strong support for our cloud effort,” said Zack Moxcey, Microsoft director of investor relations, in an interview after the results.

Microsoft doesn’t disclose detailed quarterly revenues and profits for its individual cloud businesses. Instead, the company calculates an overall commercial cloud run rate by taking revenue in the final month of the quarter for Office 365 Commercial, Azure, Dynamics Online, and other cloud properties, and then multiplying by twelve. The commercial cloud run rate has increased by $1 billion during each of the prior three quarters.

In a call with reporters and analyst after the earnings release, CEO Satya Nadella repeated an April 2015 vow that the company will have $20 billion in annualized cloud revenue by 2018 (that is, in fiscal 2018, which ends June 30, 2018).

Office 365 commercial revenue showed strong growth, up 49 percent. Revenue from Azure alone was up 93 percent year over year, with usage more than doubling, Microsoft said in a release. But in three of four prior four quarters, the Azure revenue percentage increases were triple-digit.

Analysts expected that segment to bring in about $6.73 billion in revenue, according to a StreetAccount consensus estimate cited by CNBC. That figure was in the high end of the range Microsoft projected for the segment: $6.55 billion to $6.75 billion.

During the quarter, Microsoft put into technical preview its Analysis Services, a range of analytics tools that run against a variety of data sources, including programs and tools from Microsoft competitors. The company partnered with TomTom, a Dutch firm specializing in electronic navigation and mapping, to help build up location-based services. It released a cloud console that it said combines a graphical user interface, for simplicity, with a command-line interface, for power. And it made Kubernetes, an open-source container manager, part of its Azure container service.