Microsoft reported revenue of more than $26 billion for the December quarter, with earnings of 84 cents a share, after adjusting for its LinkedIn deal and Windows 10 revenue deferrals — beating Wall Street’s expectations and continuing the company’s resurgence under CEO Satya Nadella.

Analysts polled in advance expected Microsoft to report profits of 79 cents a share, on revenue of $25.28 billion, according to Yahoo Finance.

Office 365 was a highlight for the company in both the business and consumer segments, as Office 365 commercial revenue rose 47 percent, and Office 365 consumer subscribers climbed to 24.9 million, up by about 1 million subscribers over the past three months.

“Our customers are seeing greater value and opportunity as we partner with them through their digital transformation,” said Nadella in a news release. “Accelerating advancements in AI across our platforms and services will provide further opportunity to drive growth in the Microsoft Cloud.”

It’s the first earnings report for Microsoft since the company completed its acquisition of LinkedIn for more than $26 billion on Dec. 8. That means three weeks of LinkedIn’s results are technically included in Microsoft’s quarterly financials, although they’re being excluded for purposes of comparison to Wall Street’s expectations.

LinkedIn’s results contributed revenue of $228 million to Microsoft’s results, and pulled down the company’s bottom line with a loss of $100 million for the three weeks. The company broke down LinkedIn’s contribution in this chart. 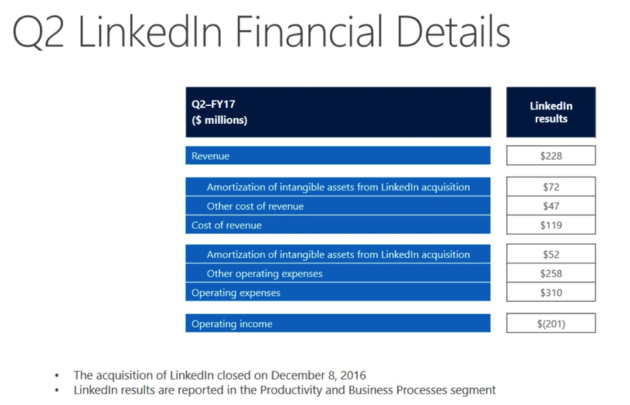 On a conference call with analysts, the company cited a positive financial benefit from an unidentified legal settlement. “General and administrative expenses decreased $159 million or 15%, primarily due to the benefit of a legal settlement in the current year, lower employee-related expenses, and a reduction in phone expenses, offset in part by LinkedIn expenses,” Microsoft said in its 10Q.

Update: The legal settlement was from Microsoft’s antitrust lawsuit against Panasonic and Sanyo, which dated back to the Nokia smartphone division that was acquired by Microsoft. The suit, which alleged a price-fixing conspiracy for lithium-ion batteries, was reported to be settled between Panasonic, Sanyo and Microsoft in November.

Here are more divisional highlights as reported by Microsoft.

Revenue in Productivity and Business Processes was $7.4 billion and increased 10% (up 12% in constant currency), with the following business highlights:

· LinkedIn contributed revenue of $228 million for the period beginning on December 8, 2016

Revenue in Intelligent Cloud was $6.9 billion and increased 8% (up 10% in constant currency), with the following business highlights:

Revenue in More Personal Computing was $11.8 billion and decreased 5% (down 4% in constant currency) driven primarily by lower phone revenue, with the following business highlights:

Earlier this week, Microsoft named LinkedIn executive Kevin Scott as the Redmond tech giant’s chief technology officer, filling a newly established role and creating a new connection between the companies as they work together under the same corporate umbrella. Microsoft has said it will let LinkedIn operate largely autonomously.