Microsoft this morning announced the second generation of its laptop-tablet hybrid Surface Book — a long-awaited refresh to one of the Redmond tech giant’s key first-party devices.

RELATED STORY: Microsoft’s latest Windows 10 refresh is here: What to expect in the Fall Creators Update

To be released Nov. 16, Surface Book 2 is virtually the same as its predecessor from the outside. The signature hinge is still there, as are many of the other specs. But this time around, Microsoft added a second, larger 15-inch model and says it turbo-charged the device under the hood.

This is a key release for the company’s hardware division. It has been two years since Microsoft released the original Surface Book. The long gap between Surface Pro and Surface Book releases has contributed to a decline in the company’s Surface revenue this year. 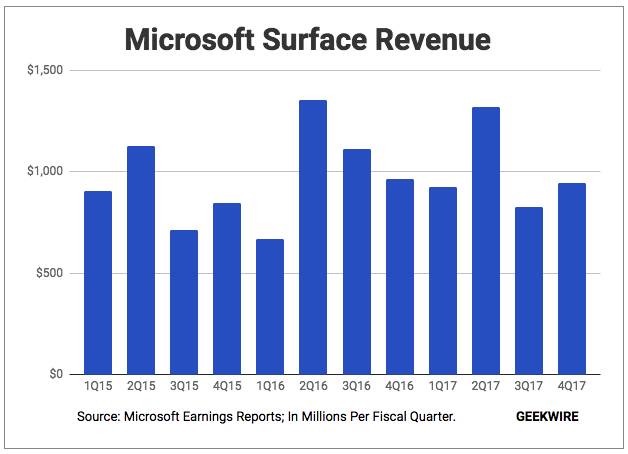 The 13.5-inch Surface Book 2 starts at $1,499 and the 15-inch model goes for $2,499. Yusuf Mehdi, corporate vice president for Microsoft’s Windows and Devices Group, told GeekWire in an interview that the Surface Book 2 is twice as powerful and twice as fast as the newest MacBook Pro from Apple. Microsoft claims a battery life of up to 17 hours, which Mehdi said is 70 percent longer than the MacBook Pro.

“Our mission is we want to build the ultimate laptop, whether you want the ultimate in power, the ultimate in versatility, or the ultimate in style and design,” Mehdi said. “We’re building Surface for creators of all types. But in this latest release we’re really going to push the envelope for the people who really need the most power.”

That means graphic designers, computer programmers and other high-intensity users are the target market for the top end versions of the Surface Book 2. The 15-inch model complements one of Microsoft’s other recent high-powered devices, the $2,999 Surface Studio, which came out last year. Microsoft is targeting a similar customer base with the two computers, but the Book might make more sense for someone who is on the go more often.

Microsoft has in recent years put out a flurry of new devices, while working with partners on other hardware projects. It started with the line of Surface tablets and eventually expanded into the Surface Book. Then last year Microsoft introduced its high-end Surface Studio desktop computer. It followed that up with the release of the Surface Laptop this summer.

Mehdi explained Microsoft’s philosophy when it comes to building its own devices, versus working with partners. When there is a lot of interest in a concept, such as virtual reality, where Microsoft is working with companies like HP, Lenovo, Acer and now Samsung, Microsoft is happy to partner. But when they see an underserved area or concept, that is when the tech giant jumps in with its own ideas.

“Our strategy in general with hardware is to enter only when we think that there is a need for us to pioneer a new category, or to drive some differentiation, or invest where people are not willing to invest,” Mehdi said.