Microsoft’s revenue from its Surface hardware business slipped to $826 million in the last quarter, a 26 percent decline from a year ago. The result was a rare dud for the company in an otherwise strong quarter.

However, this looks like it could be more of a blip than a trend. The biggest takeaways: 1) Microsoft needs to come out with a new Surface Pro as soon as possible; and 2) the underlying mission of the Surface business seems to be working, inspiring new types of Windows devices from third-party hardware makers. 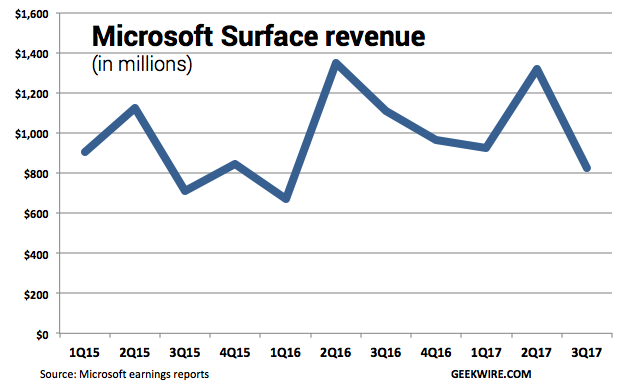 In a conference call with analysts and investors, Microsoft CEO Satya Nadella attributed the decline to the “end of product life cycle” for certain Surface devices, and increased price competition. Surface Pro was released in October 2015, along with Microsoft’s first laptop, the Surface Book — making them each ripe for a refresh.

Microsoft is holding an education technology event in New York City next week, with hints of a possible hardware release, but it’s not clear if we’ll see a successor to one of these devices as part of that unveiling. Mary Jo Foley of ZDNet cites sources who say there will be a new Surface Pro “relatively soon,” but not next week.

However, Nadella made it clear that Microsoft is prepping new devices and products in general: “We continue to innovate and invest in creating new computers and computing experiences. Surface Pro; Book; Hub; Studio and HoloLens are all creating new markets for the Windows ecosystem and pushing differentiation with new natural user interface capabilities – ink, vision, voice, touch and mixed reality,” he said on the conference call.

Then there’s the price competition. Microsoft says that’s primarily coming from other 2-in-1 devices, and while that category includes Apple’s iPad Pro, it also means that there’s a growing market of similar third-party Windows 10 devices. This gets to a central purpose of the Surface business — to forge a path to a broader market for Windows devices.

In that way, the Surface can be seen as a victim of its own success, to the benefit of Microsoft’s broader business. That trend was reflected in Microsoft results, as sales of Windows to device makers (OEMs) grew at 5 percent overall, outpacing the PC market, and Windows commercial products and cloud services revenue rose by 6 percent, reflecting solid adoption of Windows 10 among enterprise customers.

Apart from the timing of a Surface Book and Surface Pro refresh, the big question now is whether Microsoft will try to replicate the effect in a new category of Surface hardware. We may find out as early as next week.