Microsoft this afternoon posted revenue of $23.6 billion, up 6 percent, and earnings of 73 cents a share, an increase of 16 percent, beating Wall Street’s profit expectations for the quarter ended March 31. 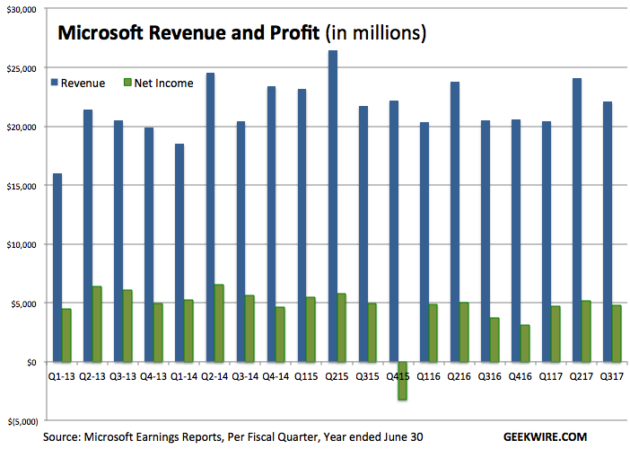 CEO Satya Nadella credited factors including Microsoft’s cloud business in the company’s earnings report. “Our results this quarter reflect the trust customers are placing in the Microsoft Cloud,” he said. “From large multi-nationals to small and medium businesses to non-profits all over the world, organizations are using Microsoft’s cloud platforms to power their digital transformation.”

Analysts polled in advance expected Microsoft to report profits of 70 cents a share, on revenue of $23.6 billion. Microsoft in recent months has continued to cross all-time high thresholds for its stock and market value. The company’s shares were trading down nearly 3 percent after the earnings release.

LinkedIn contributed $975 million in revenue for the quarter, boosting Microsoft’s top line, but was a drag on profits with a $386 million operating loss, although a large portion of that was due to costs related to the acquisition. Without those costs, the loss would have been about $15 million.

This is the first full quarter of results since Microsoft acquired the business social network for $26 billion. Earlier this week, LinkedIn announced that it surpassed 500 million members globally, and Microsoft detailed plans to incorporate LinkedIn data to create new features for its Dynamics 365 sales and recruiting technology. 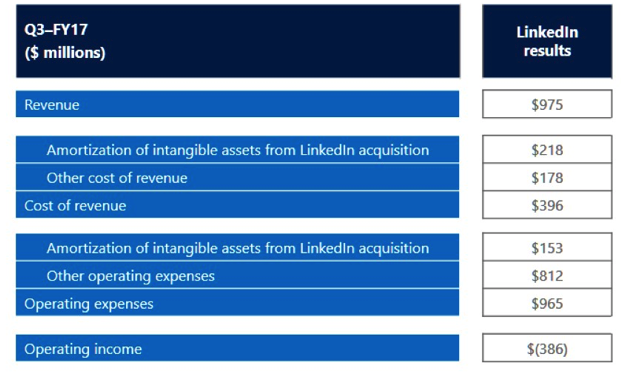 Microsoft, which competes with companies including Amazon and Google in the cloud, this week announced several customer wins for its Azure cloud computing business: UBS, Maersk, Hershey, Fruit of the Loom, and Geico. Azure is considered the Number 2 public cloud by market share, behind Amazon Web Services.

Revenue in the company’s Productivity and Business Processes division was $8 billion, an increase of 22 percent, driven by Office 365 commercial and consumer subscriptions.

In its Windows business, the company released the second major update to Windows 10, dubbed the Creators Update, earlier this month, but Microsoft continues to face headwinds because of the sluggish market for consumer PC sales.

Microsoft reported revenue of $8.8 billion, down 7 percent, in its More Personal Computing Division, which includes the Windows business in addition to search advertising and gaming revenue. However, the Windows business overall grew by about 5 percent. The drag on the Personal Computing division came primarily from the Surface hardware business, which saw revenue fall $285 million, or 26 percent. 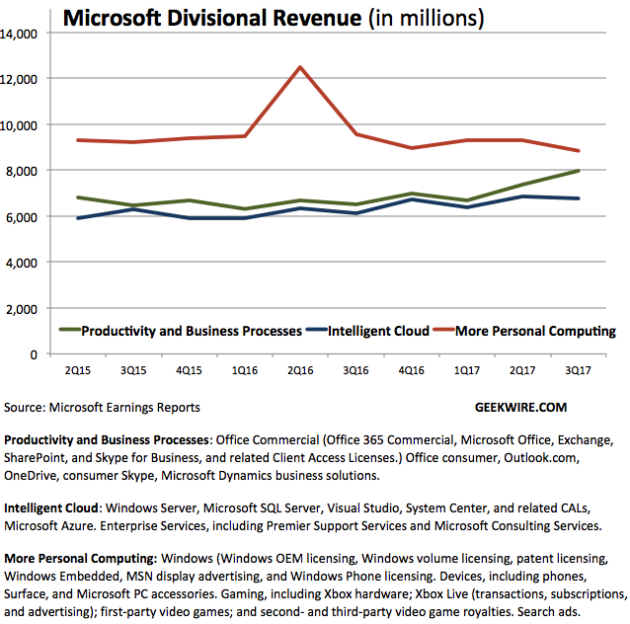 The company will hold an event in New York next Tuesday where it’s expected to release new products for the education market, possibly including a Windows 10 Cloud Operating system and potentially a companion device. The company has reduced its focus on first-party smartphone hardware but is charging ahead with devices including the Surface Book notebook computers and Surface tablets.

Microsoft’s gaming revenue increased $78 million, or 4 percent, while Xbox Live monthly active users rose 13 percent year-over-year to 52 million, down from a holiday quarter peak of 55 million. Microsoft’s Xbox division is slated to release new details about its next console, code-named Project Scorpio, during the E3 game convention in June.