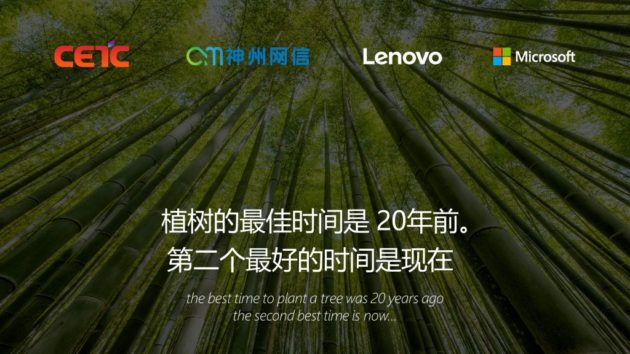 Microsoft this morning officially confirmed a new version of Windows designed for use by the Chinese government and state-owned entities, aiming to get its operating system back on official government procurement lists in the world’s most populous nation.

One of the key features: the ability for the government to use its own encryption technology.

The new “Windows 10 China Government Edition” was developed by Microsoft in partnership with the state-owned China Electronics Technology Group, and it will be available from computer manufacturers including Beijing-based Lenovo Group.

“The Windows 10 China Government Edition is based on Windows 10 Enterprise Edition, which already includes many of the security, identity, deployment, and manageability features governments and enterprises need,” writes Terry Myerson, head of the Windows and Devices Group. “The China Government Edition will use these manageability features to remove features that are not needed by Chinese government employees like OneDrive, to manage all telemetry and updates, and to enable the government to use its own encryption algorithms within its computer systems.”

China blocked Windows from government procurement in 2014 amid concerns about security and U.S. government surveillance.

The news came at an event in Shanghai where Microsoft announced a new Surface Pro hybrid laptop/tablet.