Three quarters before a self-imposed deadline to achieve $20 billion in annualized revenue from its commercial cloud products and services, Microsoft announced Thursday that it had achieved that goal.

With its first fiscal quarter in the books, Microsoft is on track to achieve $20.4 billion in commercial cloud revenue from products like Azure, Office 365, and Dynamics 365, among others, it said in a release laying out its overall results. For the company’s Intelligent Cloud division, which includes Azure and Windows Server, revenue increased 14 percent to $6.9 billion, with Azure growth of 90 percent. 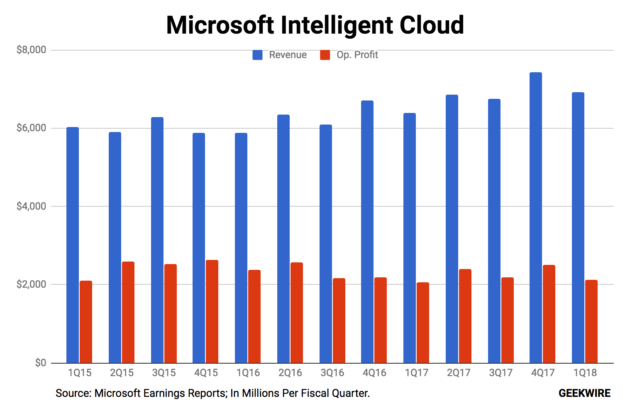 Back in April 2015, Microsoft CEO Satya Nadella set the cloud revenue goal as a way of changing perceptions of Microsoft both inside and outside the company. Instead of the decades-long obsession with Windows sales as the key indicator of Microsoft’s performance, focusing — and delivering — on a big cloud services revenue goal showed that the company was ready to move those days into a new era, as he detailed at our GeekWire Summit earlier this month.

“It took us from a defensive frame amid falling PC and phone shares to an offensive mindset,” Nadella wrote in his new book, “Hit Refresh,” which tells the story of Microsoft’s turnaround. “We went from deflection to ownership of our future.”

Microsoft defines this “commercial cloud” term fairly broadly, lumping some revenue from its Intelligent Cloud business unit that is responsible for Azure and Windows Server with revenue from the sales of cloud-based products that fall under its More Personal Computing division.