This was my litmus test for Satya Nadella’s new book: Does he write about his Grace Hopper debacle? The answer is yes. “Hit Refresh” addresses head-on the biggest public stumble of the Microsoft CEO’s career, when he told an audience at the celebration of women in computing that they should not ask for raises but instead trust that hard work and the long-term efficiency of the system would reward them. 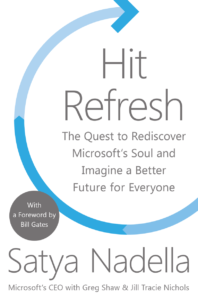 “If you want to see what flapping around looks like, do a search for me and karma,” Nadella writes in the book, explaining all the ways he was wrong, and everything he has learned and done since, including the decision to link a portion of executive compensation to diversity improvements inside the technology giant.

He writes, “In some ways, I’m glad I messed up in such a public forum because it helped me confront an unconscious bias that I didn’t know I had, and it helped me find a new sense of empathy for the great women in my life and at my company.”

Candid moments such as those are highlights of Nadella’s first book, “Hit Refresh: The Quest to Rediscover Microsoft’s Soul and Imagine a Better Future for Everyone,” published by HarperCollins and due out Tuesday. Nadella has been Microsoft’s CEO for more than three years, overseeing an increase of more than $280 billion in market value at the 42-year-old tech giant. While he cautions that the company’s reinvention still has a long way to go, his story and Microsoft’s new era deserve this in-depth look from the inside.

It might be easy to dismiss the book as 288 pages of thinly veiled Microsoft marketing and communications, and it certainly offers plenty of that. But ultimately “Hit Refresh” is much more, and it works on multiple levels.

Behind the scenes at Microsoft

For tech industry insiders, one of the most compelling chapters will be “Friends or Frenemies?” — in which Nadella describes the company’s complicated relationships with some of its biggest rivals and partners, including Google, Apple and Samsung.

Of course, Nadella is careful in what he writes, as you would expect from any sitting CEO. Someone else’s book will have to deliver the juicy inside details on Microsoft’s fierce battle with one-time “frenemy” Marc Benioff and Salesforce over LinkedIn, which Microsoft ultimately won for more than $26 billion.

But “Hit Refresh” does offer enough behind-the-scenes details to make it a satisfying read, even for those who know the company well. In addition to his brutally candid assessment of his Grace Hopper performance, Nadella dishes tidbits such as:

Nadella is quick to point out that the company’s transformation is still a work in progress. After three years of focusing on improving Microsoft’s culture, he writes, internal surveys showed that employees were largely happy with the company’s direction and newfound sense of internal collaboration and purpose. However, he writes, surveys also revealed a “disheartening” finding: some middle managers were “a missing link” in the cultural transformation.

At a meeting of Microsoft’s top 150 executives, he laid down the law: “To be a leader in this company, your job is to find the rose petals in the field of shit,” he told them.

“Perhaps not my best line of poetry,” he concedes, “but I wanted these people to stop seeing all the things that are hard and start seeing things that are great and helping others see them too. Constraints are real and will always be with us, but leaders are the champions of overcoming constraints.”

Nadella distinguishes himself from Microsoft’s first two CEOs, paying homage to Gates and Ballmer but making it clear that he’s a different leader.

“Microsoft is known for rallying the troops with competitive fire,” Nadella explains when discussing the company falling behind Apple and Google in smartphones. “The press loves that, but it’s not me. My approach is to lead with a sense of purpose and pride in what we do, not envy or combativeness.”

President Donald Trump gets two passing references in a policy chapter, called “Restoring Economic Growth for Everyone,” but Nadella doesn’t write anything that will make him the target of a late-night tweet. However, as part of his conclusion to the Grace Hopper section, Nadella does allude to former presidential adviser Steve Bannon’s complaints about the number of Asian CEOs in the tech industry.

“Even when some people in positions of power have remarked that there are too many Asian CEOs in technology, I’ve ignored their ignorance,” he writes. “But as I grow older, and watch a second generation of Indians — my kids and their friends — grow up as minorities in the United States, I cannot help but think about how our experiences differ. It infuriates me to think that they will hear and grapple with racial slurs and ignorance.”

Nadella writes about the painful process of shutting down a large portion of the company’s smartphone hardware business, and confirms that he opposed the $7 billion acquisition of Nokia’s smartphone business when polled by then-CEO Ballmer. Characteristically, Nadella sees a silver lining even in this, saying the experience taught Microsoft “a lot about what it means to design, build and manufacture hardware.”

To help change Wall Street’s outlook on the company, Nadella writes that he followed CFO Amy Hood’s recommendation to set a public goal of building a $20 billion cloud business — “something investors grabbed on to and tracked quarter after quarter,” he explains. “It took us from a defensive frame amid falling PC and phone share to an offensive mindset. We went from deflection to ownership of our future.”

Nadella’s chapter on the direction of technology, “Beyond the Cloud,” does a good job of explaining the potential of mixed reality, artificial intelligence and quantum computing. And a separate chapter, “The Future of Humans and Machines,” addresses many common concerns about artificial intelligence, calling on the industry and political leaders to pursue a “global collaboration” to advance the state of AI in ways that addresses humanity’s worst fears.

“I would argue that the most productive debate we can have about AI isn’t one that pits good vs. evil, but rather one that examines the values instilled in the people and institutions creating this technology,” he writes.

Not to be overlooked is Nadella’s remarkable personal story. His recalls his dad, a civil servant, hanging a poster of Karl Marx in his bedroom, and his mom, a Sanskrit scholar, hanging one of Lakshmi, the Indian goddess of plentitude and contentment. “My reaction? The only poster I really wanted was one of my cricketing hero, the Hyderabadi great, M.L. Jaisimha, famous for his boyish good looks and graceful style, on and off the field,” he writes.

Nadella discovered the magic of programming computers at 15 years old, when his dad bought him a Sinclair ZX Spectrum computer kit running a Z80 CPU processor developed by a former Intel engineer who had been working on the 8080 microprocessor, the same chip for which Microsoft co-founders Gates and Paul Allen coincidentally made the original version of Microsoft BASIC.

My son’s condition requires that I draw daily upon the very same passion for ideas and empathy that I learned from my parents.

He came to the United States initially as an electrical engineering student and became a permanent resident before taking the unusual step of giving up his green card for an H1B visa for a time because of the vagaries of immigration law, allowing his wife, Anu, to join him in the U.S., something that was not possible if he was a permanent resident.

Nadella also shares the personal story of his family, including his son, Zain, who was left with cerebral palsy after suffering asphyxia in utero. He writes about his wife’s instrumental role in helping him come to terms with the situation, ultimately understanding that it was not a setback for him but rather a chance to expand his worldview. “My son’s condition requires that I draw daily upon the very same passion for ideas and empathy that I learned from my parents,” he writes.

For people who have followed the company story over the years, it’s interesting to see which Microsoft engineering and business leaders Nadella spotlights in the book, as a measure of influence inside the company. I’m sure this was a subject of much hand-wringing for Nadella and his co-authors, Greg Shaw and Jill Tracie Nichols, and many Microsofties will inevitably start the book by flipping to the index.

But there’s a bigger takeaway from this: Where Ballmer and Gates leaned largely on each other, Nadella doesn’t seem to have a singular partner inside the company. Instead, he looks to a larger group, likening Microsoft’s senior leadership team to a “Legion of Superheroes, with each leader coming to the table with a unique superpower to contribute for the common good.”

Will Nadella’s heroes prevail? Will Microsoft continue to rebound? Will a new sense of empathy take over the tech industry? Will the world survive the coming wave of AI and quantum computing? Stay tuned, because this story is just getting started. In the meantime, Nadella’s “Hit Refresh” is a worthy first take.

Satya Nadella will discuss his book in an interview on stage at the upcoming GeekWire Summit in Seattle. The Microsoft CEO is donating all proceeds from “Hit Refresh” to Microsoft Philanthropies.