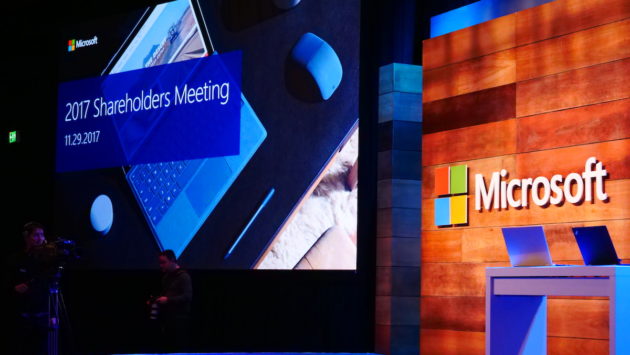 Shareholders approved an unprecedented number of board members during the meeting. Microsoft is expanding its board to 14 people, the largest number in the company’s history. (See full list below.)

Microsoft shares have risen more than 37 percent over the past year, as the company has expanded its cloud business and reached its goal of a $20 billion commercial cloud run rate ahead of schedule.

Nadella has overseen a resurgence at the company, betting on the emerging technologies of artificial intelligence, augmented realty and quantum computing while shifting the company’s traditional Office and Windows businesses to a subscription-based model through the Microsoft 365 service.

Amy Hood, Microsoft’s chief financial officer, touted the company’s $90 billion in revenue for its 2017 fiscal year, which was up from $85 billion the year before. She also highlighted the company’s acquisitions, including the largest deal in Microsoft’s history, its $26 billion purchase of business social network LinkedIn. Hood said Microsoft is ahead of its original financial projections for LinkedIn’s addition to the company.

The company overnight made a major announcement about its Redmond campus, revealing plans to tear down and redevelop the original buildings at the center of its 500-acre headquarters in a multi-billion dollar project. Brad Smith, president and chief legal officer, briefed shareholders on the plan and showed this video.

“Now it’s time for a new generation, for Microsoft and for our campus,” he said.

Smith noted that at least one element of the original campus will remain: the pond known as “Lake Bill,” where teams would traditionally take a dunk after major milestones. Microsoft co-founder Bill Gates, sitting with other board members in the front row at the meeting, grinned at the news.

Nadella gave shareholders a broad update on the company’s business and strategy, including a new milestone for the Windows 10 business, which is now active on has more than 600 million devices a month.

Technology demos at the meeting included the Cortana virtual assistant and a new Eye Control technology for controlling and typing on a Windows 10 PC using eye gaze, with no hands. Another demo focused on the artificial intelligence Microsoft Translator feature now available as part of PowerPoint.

The executive Q&A with shareholders was extremely low-key, compared to years past, when shareholders would grill Gates and former Microsoft CEO Steve Ballmer over the company’s stock price, revenue growth and dividends. Most of the questions this year focused on the company’s product plans and strategies, with no major revelations from Nadella and other executives.

Microsoft streamed the event here and the company’s proxy statement has more details on the proposals considered by shareholders at the meeting.

Here are the new members of the company’s board.