Microsoft plans to tear down a dozen of the iconic original buildings at the heart of its 500-acre headquarters in Redmond, Wash., and replace them with 18 new structures in a sweeping redevelopment project that will make room for 8,000 additional workers.

The multi-billion dollar initiative promises to reshape Microsoft’s home, replacing the 1980s buildings where Bill Gates oversaw the company’s growth into a tech industry giant. In their place will rise a dense, modern campus, centered around open spaces and sports fields, with a new skybridge over state Route 520.

Microsoft plans to redevelop the campus in phases. The new buildings will open in five to seven years, around the time that Sound Transit plans to complete the extension of light rail from downtown Seattle to Redmond. A nearby station will drop thousands of people off at the campus every morning.

“It’s a space that is going to take advantage of the arrival of light rail,” Microsoft President and Chief Legal Officer Brad Smith told GeekWire in an interview about the project. “It illustrates the good things that can come when a region makes smart investments in long-term transportation infrastructure.” 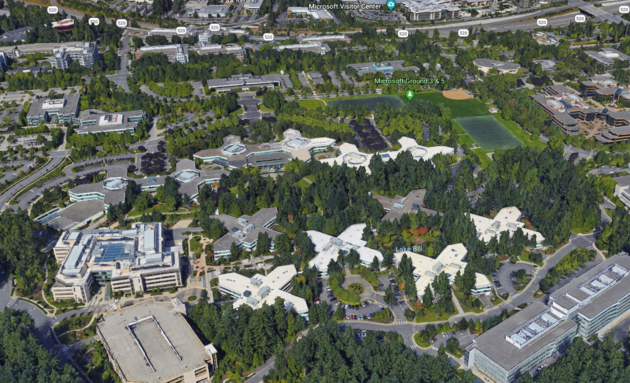 The move cements Microsoft’s commitment to the Seattle region at a time when its fellow tech giant, Amazon, is searching for another city to locate a second North American headquarters.

Microsoft has a global footprint, but CEO Satya Nadella has made it clear that the company isn’t experiencing wanderlust when it comes to headquarters planning. Nadella said at the GeekWire Summit in October that Microsoft is in “no hurry to talk about any HQ2s” and is “happy with where we are in Redmond.”

Smith echoed those comments, noting that the Microsoft campus is a unique asset in the quest to find and keep the best talent.

“We have the luxury of having 500 acres, and we fully appreciate that it is a luxury that very few companies have, especially when you have 500 acres that are part of a very thriving healthy metro environment,” Smith said, “And we’re very fortunate to have 500 acres connected by light rail to the rest of the region.”

Many of the tech giants competing against Microsoft for talent have developed their own iconic headquarters campuses, including Apple, Amazon and Facebook. Expedia, currently based in downtown Bellevue, plans to move to a stunning new HQ on the Seattle waterfront.

And speaking of Bellevue, Smith said Microsoft has no plans to give up any of its downtown Bellevue space, or pull back from offices in Issaquah, where it recently renewed a big lease. Microsoft’s continuous quest to expand the mothership has led some observers to worry that the company planned to leave downtown Bellevue, dumping a lot of vacant space on a market that is set to lose Expedia in a couple years.

Microsoft’s Redmond campus opened in 1986, and since then it has been in a near-constant state of change. This transformation is the biggest in at least a decade for the campus, which today totals 15 million square feet in 125 buildings on both sides of SR 520. The project also signals Microsoft’s desire to grow its workforce in the region well beyond the 47,000 people it employs in the Seattle area today.

The project will change the center of gravity at Microsoft’s campus. The company’s top executives will relocate to one of the new buildings, as will the Microsoft “executive briefing center” where the company hosts key customer briefings and industry conferences.

At least one relic to Microsoft’s past will remain in the new project. The “Lake Bill” pond on the original campus, famous among veteran Microsofties, is staying, Smith said. Gates’ corner office in Building 4 overlooked the lake, where executives were known to take dunks to settle bets and reward sales milestones.

The original Redmond buildings — with their iconic “X-Wing” design — may stir up nostalgia among Microsoft veterans. However, they probably won’t be missed by current employees. The layout of the structures makes them notoriously difficult to navigate, and very easy to get lost inside. They date back to an era when individual offices were the tradition at Microsoft, long before the open floor plans and collaborative spaces of today.

The new campus “gives us the ability to build a working environment that matches the culture that we’re creating for Microsoft,” Smith said. “It’s going to be a working environment that we believe is going to foster creativity and teamwork and informality and the ability of people to connect with and learn from each other and connect with our customers.”

In addition to developing the new buildings and creating additional green space, Microsoft says it is continuing a years-long plan to update 6.7 million square feet of its current facilities.

Soccer and cricket fields will dot the new campus, and a central outdoor plaza will provide room for 8,000 to 12,000 people to gather for big meetings or musical performances. To make this possible, the new buildings will be set closer to each other than their predecessors, with underground parking.

The company says it has a $33.3 million funding agreement in place with Sound Transit for the construction of the light rail station and the new pedestrian bridge that will connect the east and west sides of the campus to the station.

Watch the Microsoft video at top for more images of the new campus.