Many people nowadays are concerned about the way technology is changing their lives. From worries about artificial intelligence taking jobs, to the huge influence of social media, to companies invading our digital privacy, the modern world brings more than its share of pitfalls.

James Suzman knows people who may have already found the solution. For the past 150,000 years, they’ve prospered with nothing more than a well-built set of bows and arrows, working as little as 15 hours a week.

Suzman isn’t suggesting that we go back to bows and arrows ourselves. But he says the Bushmen could provide a key, or at least a roadmap, to addressing the impact of artificial intelligence and automation on jobs and modern-day society.

“Robots are stealing our jobs, the guts are hollowed out of the industry, what the hell are people going to do? How are we going to fight?” Suzman says. “Actually, hunter-gatherers tell us: One, we’re not preconditioned to work as hard as we do; it’s a very recent cultural thing. Two, we know it’s actually pretty unhealthy, the amount of work we do. Not just individually, but in productive terms for our planet.”

He explains, “So maybe, instead of worrying about how to find stuff for other people to do and be productive, maybe we look at this as an opportunity to re-imagine our relationships with our workplaces, and look towards creating potentially a much more sustainable future. It’s a first step in looking at other principles about how we might live in what is an extremely abundant world now.” 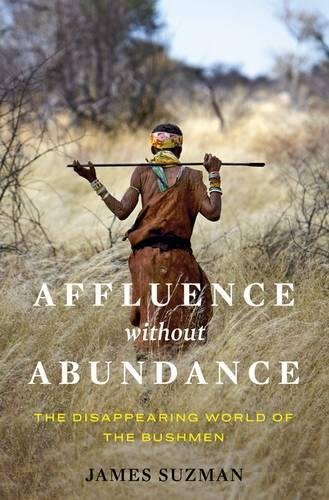 Suzman is an anthropologist and author who has spent the past 25 years studying and living with the Bushmen of southern Africa, indigenous people who have lived in an egalitarian, mostly technology-free society for millennia. His latest book is “Affluence Without Abundance: The Disappearing World of the Bushmen.”

After a recent visit to the University of Washington in Seattle — before returning home to the UK to address the Royal Geographical Society — Suzman joined us for this episode of the GeekWire Podcast to talk about his work, and what the rest of us can learn from the Bushmen.

It’s a particularly relevant message on this Thanksgiving Day in the United States, as we prepare for our modern traditions of consumption, starting with Black Friday tomorrow and continuing into the peak holiday shopping season.

Listen to the full episode above, download the MP3 here, and keep reading for edited excerpts. Also listen to the show on your favorite podcast app, including Apple Podcasts, Stitcher and Google Play.

History of the Bushmen: “Bushmen are the indigenous people of southern Africa and we now know that they’re seriously old. They’ve been there a very, very long time, much longer than anybody had previously thought.  About 20 years ago, we used to think the homo sapiens had been around for maybe 50,000 years. Now, through new genomic research, through new archeological finds, we’re pushing that boundary back by factors of 10. So we know, for example, that the bushmen people who we call the Khoisan in anthropology have been living consistently in southern Africa for at least 150,00 years. More than that, we know that for the last 60, 70 thousand years at least — and that’s just because of the evidence we can find — they’ve been technologically quite sophisticated.

“And bizarrely, up until about 20,000 years ago, they were the only people to have really complicated bow-and-arrow tech, which made a huge difference in terms of how they lived. While Europeans were still chasing after mammoths with rocks and sticks and scratching their armpits, in southern Africa, they’d been making very highly sophisticated poison bows and arrows with movable bits, and pieces and bits which would come off. Beautifully lightly made.

“What’s interesting about them in particular is that this group, up until about 20,000 years ago, were unquestionably the most successful society on planet Earth. Somehow, they found a kind of balance between sustainability, their environment, hunting and gathering and living that made them unbelievably successful and enduring. They were there for an extraordinarily long time. That makes them pretty unique.”

On social media: “We’re very early on in the process of understanding how we interact with one another on social media platforms. We haven’t yet developed a culture. It’s kind of like if you were to get a whole bunch of guys from, let’s say, this part of Seattle, and come and just dump them — 500 of them — in my part of the Kalahari Desert, and say, ‘Get on with it. You’ll have a few years where people will struggle, and maybe some will die, and somebody will try and eat the wrong snake, and so on. And it will all be kind of chaotic. But actually, you give that 50 years, they will start developing cultural organizational forms and norms that are appropriate to that space.

These egalitarian norms came about from this living life in public much as we do now on social media and Twitter and Instagram and all these things.

“I tend to think that when we look at things like social media, this is dumping people into a space in which there are no established rules yet. People are trying to find out what constitutes manners and so on. Now interestingly, in hunter-gatherer societies, all life was lived in the open. There was nothing you could hide. In the Kalahari Desert everybody’s a tracker. Everybody can read footprints in the sand like you wouldn’t believe. It’s the basis of a hunting culture. So you cannot, for example, in a Juǀʼhoan village, have an affair without everybody knowing it, because they’ll see your footprints and they’ll see the other person’s footprints, and they’ll be like, “X has gone into the bush with Y.” So everything is done in public.

“I think these egalitarian norms came about from this living life in public much as we do now on social media and Twitter and Instagram and all these things. And I think that actually, we’re probably going to end up having a sort of very highly self-conscious, regularizing force. Give it ten years, let us develop these cultural norms for behavior on Twitter, and to do that we have to make mistakes. And we’re making those mistakes now. But I think we’re going to get there.”

On digital privacy:  “In hunter-gatherer societies, there was no Big Brother looking over the tracks. It was this very disorganized, multi-nodal force. It was a series of individuals.

“If you ended up with some of the big social media giants being regulated as if they’re utilities, being broken up in a sense that they don’t have that kind of power, eventually you end up with an internet which is truly multi-nodal. And that multi-nodal system is ultimately made up of individual people effectively looking at one another. Then we might get that kind of change. But at the moment I feel concerned. This morning, I was having a chat with my uncle, and Alexa suddenly chimed in on something. I’m not going to tell you what I told Alexa to do, but then Alexa said, “OK, I will play you a song by the Foo Fighters,” so you can get a guess at what I said. I think there are genuine concerns there.

“But I also think we’re in a really weird cultural space, which we haven’t got to grips with yet. You’ve got half the world oversharing, and trying to create mythologies around their life. If you look on Instagram, everybody’s life is perfect. So there seems to be lot of concealment going on, at the same time. Again, I think it’s one of these really interesting sociological things that we’ve got to work through, but I do think that there’re big questions in terms of the ways people are using our data, and potentially abusing our data, and the concentration of that power of knowledge of human nodes in one or two spaces. I look forward to seeing how debates go in terms of a) regulating privacy, and b) potentially beginning to treat these things as utilities, as public service vehicles. Because after all, we spend so much of our time engaging with one another on these platforms that it’s like saying, who owns a public space?”

On artificial intelligence and a changing workplace: “In 1960, an anthropologist from the University of Toronto, a guy called Richard B, Lee, went out and he went to work with the Juǀʼhoan bushmen. He did a simple economic input-output analysis. In their particular case he looked at the amount of time they spent gathering wild foods and vegetables, how effective they were at it, and the amount of time they spent hunting.

“And what did he find? He found that actually, with able-bodied adults working and looking after children, and the elderly who weren’t expected to do much, they didn’t have to work more than 15 to 17 hours per week. And at same time, in the 1960s, they were better nourished than most Westerners were. Here’s this exemplary of what’s supposed to be this remnant hunter-gatherer society, and here they are, working 15 to 17 hours a week, having tons of leisure time, which they spend hanging out with their kids, playing games, telling stories, living life, falling in love and out of love. There was a lot of that happening. And they were doing so with very little effort. They had few wants, that were very easily and simply met. And because they had these kind of technologies and skills that enabled them to make a good living out of this difficult environment, they succeeded phenomenally well. And this is why they endured so long.

Maybe we look at this as an opportunity to re-imagine our relationships with our workplaces, and look towards creating potentially a much more sustainable future.

Automation’s a very obvious one, because we’re sitting panicking about how much work there’s going to be in the future for people to do. Robots are stealing our jobs, the guts are hollowed out of the industry, what the hell are people going to do? How are we going to fight? Actually, hunter-gatherers tell us: One, we’re not preconditioned to work as hard as we do, it’s a very recent cultural thing. Two, we know it’s actually pretty unhealthy, the amount of work we do. Not just individually, but in productive terms for our planet. So maybe, instead of worrying about how to find stuff for other people to do and be productive, maybe we look at this as an opportunity to re-imagine our relationships with our workplaces, and look towards creating potentially a much more sustainable future. It’s a first step in looking at other principles about how we might live in what is an extremely abundant world now.”

Find more of James Suzman’s writing, photography and research on his website.