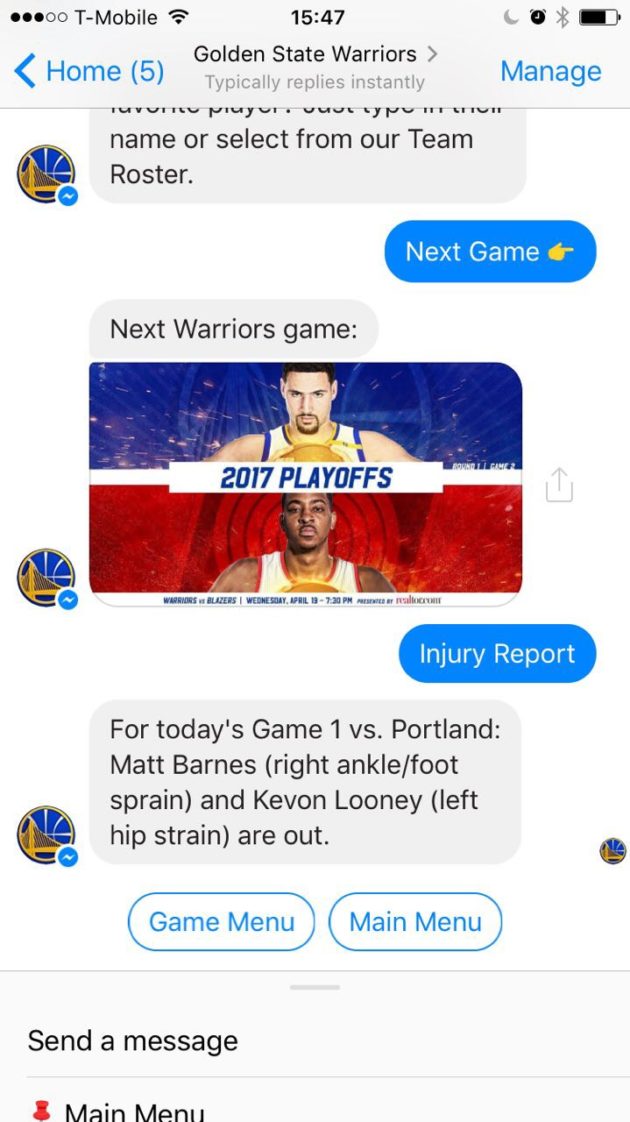 Golden State Warriors fans now have a new tech-powered assistant at their disposal during the NBA Playoffs.

The Bay Area-based NBA team rolled out a new Facebook Messenger bot today that will give fans — both those watching at home and at the arena — a virtual assistant powered by artificial intelligence.

The bot, built by Chatfuel, will engage with fans on a 1-on-1 basis within Facebook Messenger and provide live news updates, highlights, player stats, and help purchasing tickets or merchandise. For fans at Oracle Arena watching the top-seeded Warriors, who are facing off against the Portland Trail Blazers in the first round of the playoffs, the bot can show the nearest concession stand and provide traffic or parking updates.

Warriors Head of Digital Jeremy Thum told GeekWire that using the bot is all about improving the fan experience.

“Bots offer a unique interaction between a fan and their favorite team that we feel is a worthwhile exploration,” he said.

Thum said rolling out the bot is a good test as the team prepares to open a new arena in 2019 that will surely be equipped with the latest technology. The team will advertise its bot to fans through Facebook and other digital channels, as well as via in-stadium messaging.

“The fun part is, we don’t yet know exactly how fans will use the bot,” Thum added. “We have purposefully designed the bot to be more of a guided experience, though we certainly do accept, and respond to natural language submissions and queries. We will be watching closely and looking to improve constantly throughout the postseason.”

Here are a few examples of how fans can interact with the bot: 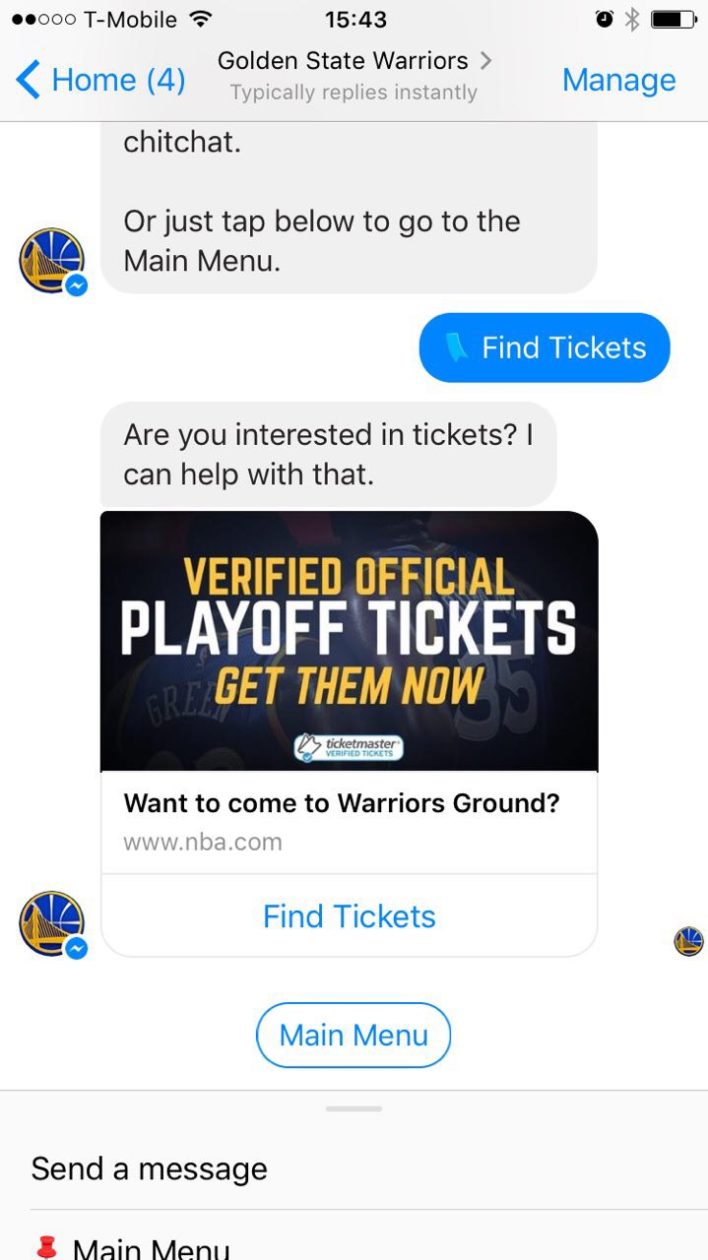 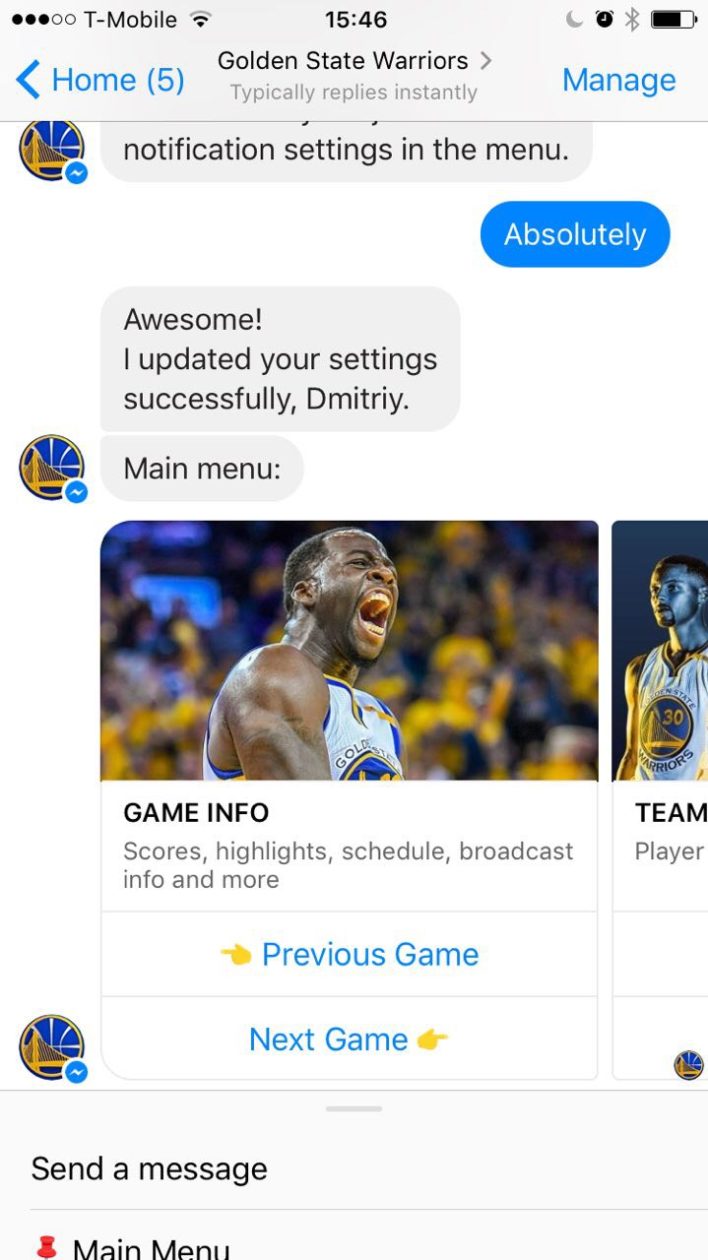 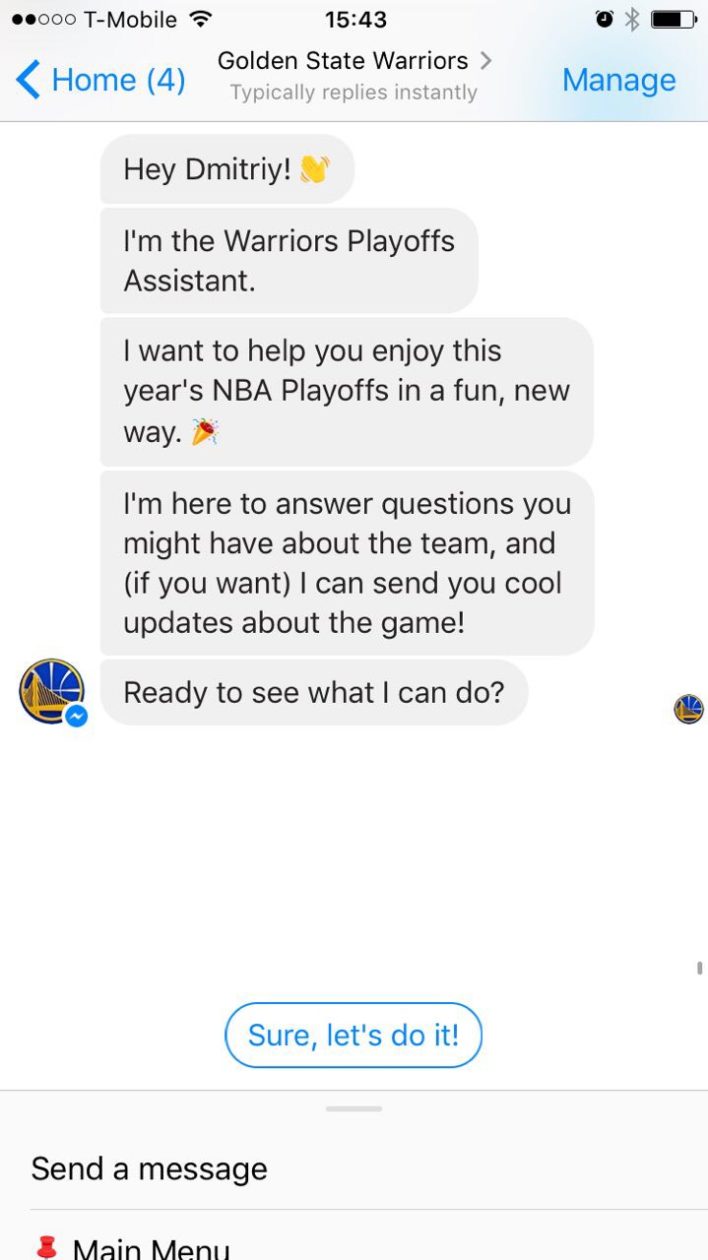 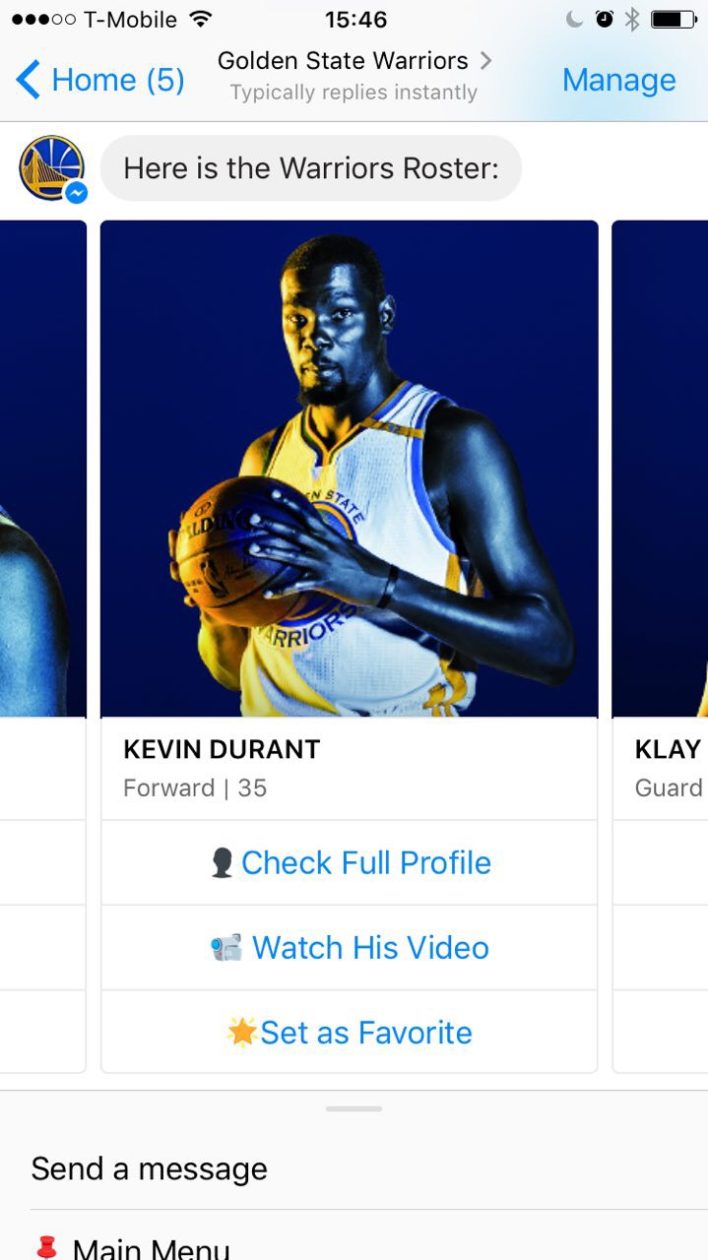 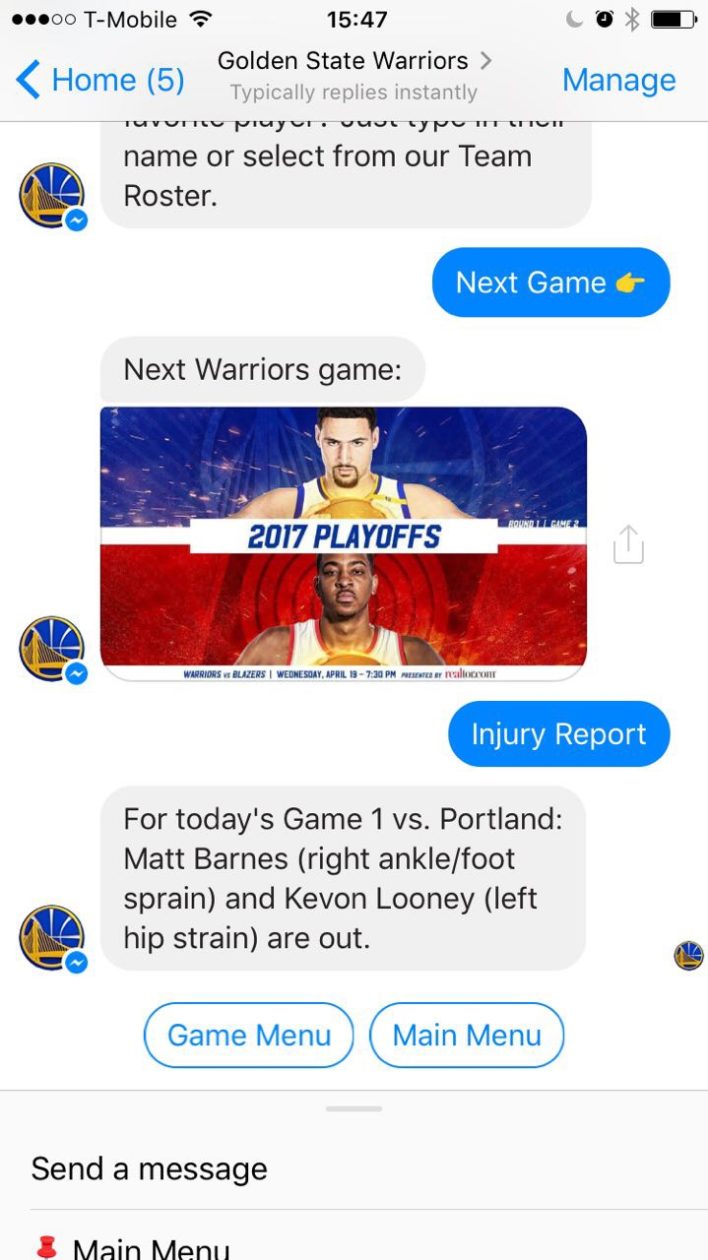 Chatfuel, backed by investors like Yandex, Y Combinator, 500 Startups, and Knight Foundation, helps companies build bots without writing any code. The company is working with other pro sports teams and has helped others like Uber, The New York Times, Adidas, and others build bots on Messenger.

Chatfuel CEO Dmitry Dumik told GeekWire that the conversational nature of bots is a convenient way for sports fans to find information quickly without having to open a web browser or separate app.

“Bots are poised to create truly frictionless fan engagement in all phases of their interaction with the team — pre, during, and post-game,” he explained. “Before the game fans can ask the bot for game previews, buy tickets and merchandise with a couple of taps; during the game fans can get the highlights in real time; and after the game the bots can share the best moments of the game so that the fans can re-live those moments in group chats with their friends without leaving their Messenger window.”

Dumik said bots can be particularly valuable for group conversations in messaging applications.

“Imagine having a bot in your basketball-themed group chat with friends, that serves up the latest news for your favorite team, and provides the latest game scores and standings,” he noted.

Further, as bots become more advanced, Dumik said they will be able to answer more complex questions and complete more difficult tasks in both individual and group chats.

“Buying and sharing tickets will also become a seamless experience for groups of people,” he explained. “Instead of one person researching available seats and prices, bots can give the options to the group chat. Options can be discussed among the participants in the same window, and the tickets can be served up right there too. No need to switch between web browser, email, and chat application.”

Teams who use a Messenger bot can also take advantage of Messenger Codes, which are similar to QR codes and can be scanned by fans inside an arena, for example. It merges the physical world with online communication.

“The use of Messenger Codes enables a fan to scan a code physically posted on a wall of the arena to be shown the specific experience on their phone screen — whether it’s logistical information about the surrounding amenities, or ability to order and pay for food and drink without leaving their seat or waving down a vendor,” Dumik said.

Facebook first announced its chatbot platform one year ago at the company’s annual F8 Developers Conference, which is taking place today. It is one of many tech companies developing AI platforms that aim to let people engage with businesses and organizations just like they do with friends and family.

We’ve seen similar sports-related bots be released since last year. The Sacramento Kings tested their own bot this season and the NBA released its own version for the NBA Finals last year. Sports media company theScore also developed its own Messenger bot.

However, this technology is still in nascent stages and are far from perfect. David Marcus, head of Facebook Messenger, said in September that the company’s bot platform had too much hype.