SAN FRANCISCO — Facebook’s chatbot platform had too much hype.

Facebook first released its chatbot platform in April, enabling developers to build robots that use artificial intelligence and natural language processing to let people talk with businesses just like they do with friends and family on Messenger.

At the April launch, Facebook showed how a commerce company like 1-800-FLOWERS could use chatbots to help people order flowers and automate communication with customers, for example.

But after TechCrunch reporter Josh Constine noted today that the product was “half-baked” when it first launched and asked what was missing, Marcus said that expectations for chatbots were a bit overdone.

“The problem was it got really overhyped, very very quickly,” he said. “The basic capabilities we provided at the time weren’t good enough to basically replace traditional app interfaces and experiences.”

In response, Marcus said Facebook has not only focused on building more chatbot capabilities, but also providing more guidance to the 34,000 developers now working on the platform (up from 10,000 in May) for how to build successful experiences. He said there are many verticals — news, online dating, bill payments, etc. — that are “working really, really well” and noted that there are now 30,000 bots.

“This is a long journey, and we need to start somewhere,” he added. 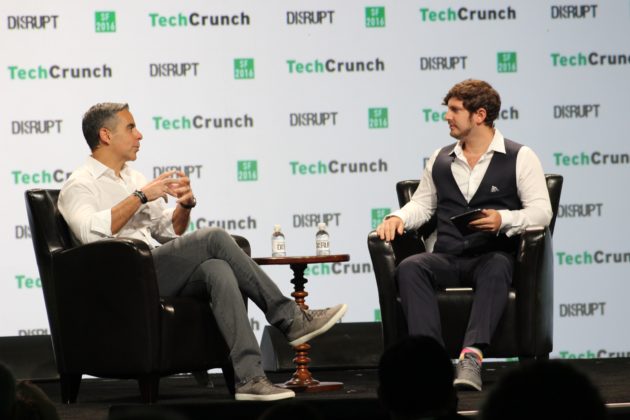 Speaking of payments, Marcus announced today that Facebook Messenger chatbots now allow native payments. Facebook is working with “almost everyone” on the integration, Marcus said, noting that the social media giant is partnering with PayPal, Stripe, Visa, Mastercard, American Express, and Braintree for chatbot payments. This will allow users to make purchases directly within Facebook Messenger via chatbots, without having to go to a company’s external website or app.

This is a long journey, and we need to start somewhere.

While Marcus noted that chatbots were initially over-hyped, the potential of the technology is still intriguing. For example, he talked about how vodka-maker Absolut is releasing a new chatbot within Messenger today that tells users which bar to go to for a free drink. Once a bartender scans your code for a free drink within Messenger, you’ll receive a notification that offers you a Lyft ride back home.

“All of these things, when you think about it in a sense of an app — that’s not an app,” Marcus said. “But it’s such a great opportunity for a brand to engage their users in a brand new way. Those types of things are actually really working well.”

Marcus also said that Absolut, which is working with Seattle startup Gratafy on the bot, is using a new feature announced today called “Destination Ads in News Feed,” which allows brands to buy News Feed ads that get users straight into Messenger. He described it as “intent creation on News Feed and intent completion on Messenger.”

“If you are a CPG company, the ability for you to target a demographic and get a 1-on-1 with customers is brand new — you’ve never been able to do that before,” Marcus said.

Facebook is one of many tech companies developing bot platforms, from other messaging apps to companies like Microsoft, which earlier this year announced a new bot framework powered by the Cortana virtual assistant that can help people book hotels, buy things online and plan your day. Amazon, Google, IBM, and others are also utilizing AI and machine learning for related products.

Marcus today also talked about other aspects of Messenger, which hit 1 billion active monthly users in July. He said there are more than 300 million people using the app’s audio and video calling features every month, which is comparable to Skype’s user base, as TechCrunch reported.