Bellevue-based Apptio is moving closer to becoming a publicly-traded company, disclosing today that it plans to sell six million shares of class A common stock at $13 to $15 per share during an initial public offering.

If underwriters exercise their options on 900,000 shares, the total offering could top $100 million at the high-end of the range. In the SEC filing, Apptio said it expects to raise $74.8 million, based upon a share price of $14. 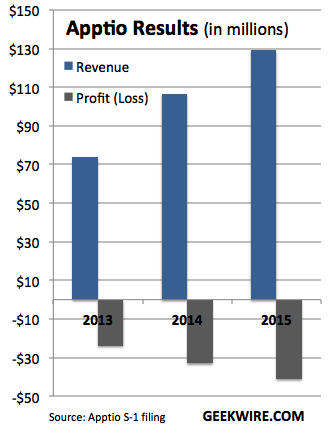 Fortune’s Dan Primack notes that the company would boast a market value of about $522 million if it priced in the mid-range.

The company, led by entrepreneur Sunny Gupta, hopes to trade on the Nasdaq under the ticker “APTI.” Its software helps CIOs better understand spending in IT departments.

If Apptio goes public, it would be the second technology company from the Seattle area to do so this year, following in the footsteps of RFID software and chip maker Impinj. Founded 16 years ago, Impinj went public at $14 per share last month, and it is now trading at just over $33 per share with a market value of more than $580 million.

Like Impinj, Apptio also is backed by Seattle venture capital firm Madrona, which owns a 16.6 percent stake in the company.

Even though revenues have topped $100 million for the past two years, losses also are growing, and the company has yet to turn a profit. In 2015, Apptio showed a net loss of $41 million, which compared to a net loss of $32.9 million in 2014.