CEOs, presidents, founders, venture capitalists, scientists, inventors, professors, researchers, and an attorney general — Day 1 at the 2017 GeekWire Summit had it all.

More than 900 of you joined us on Tuesday at the Sheraton Seattle Hotel for our annual event, which brings together innovators, entrepreneurs, business executives and tech leaders to explore the future of the innovation economy.

Here’s a quick rundown of Day 1 — the Summit continues Wednesday with speakers like Microsoft CEO Satya Nadella; Stripe co-founder John Collison; Zillow Group CEO Spencer Rascoff; and others — for those that missed the event, or want to re-live the action. See all our coverage here. You can check out social media activity on Twitter and Instagram; also see some of the day’s top quotes at our Heard & Overheard post.

The GeekWire Summit kicked off on Monday evening with a Welcome Party hosted by Vulcan, Inc. at the unique and geeky Living Computers Museum + Labs. 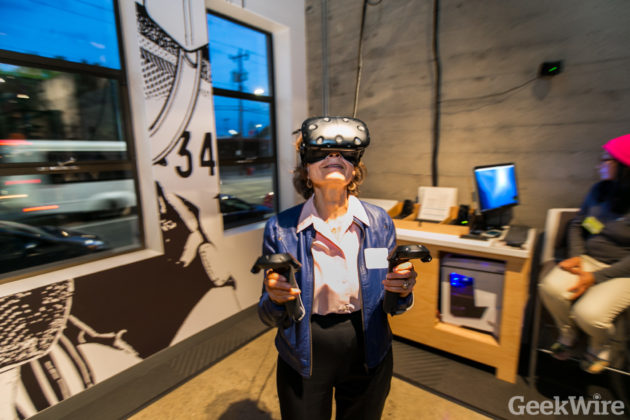 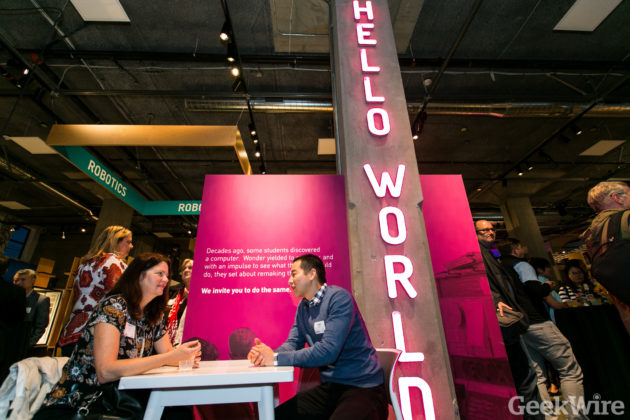 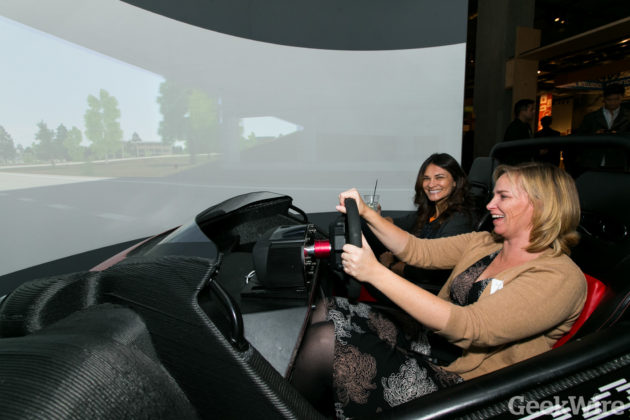 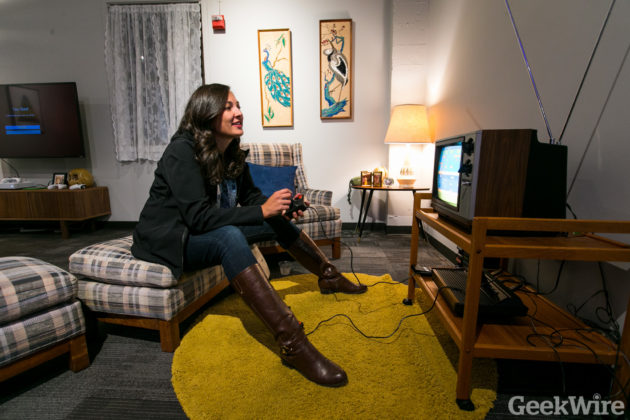 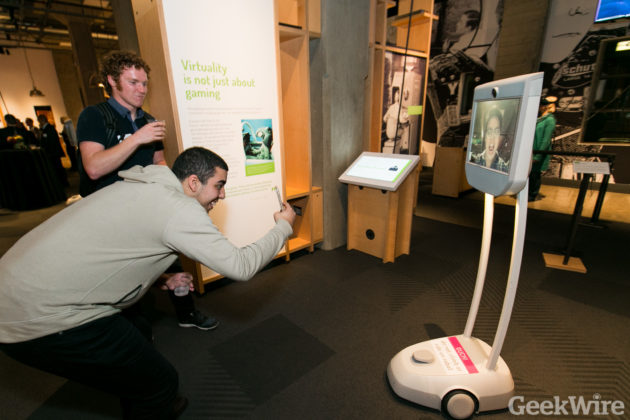 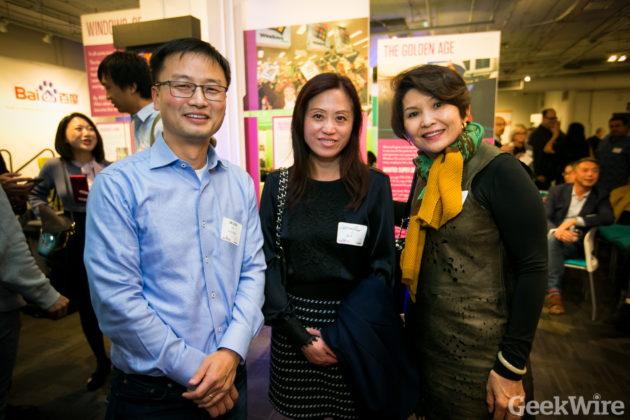 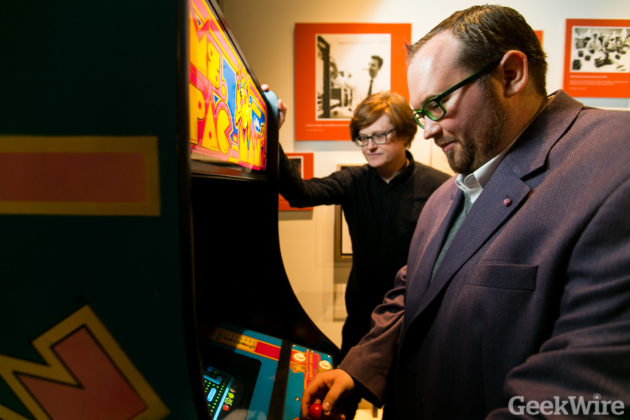 VIP guests also attended a pre-party hosted by Baidu, featuring a fireside chat with Baidu President Ya-Qin Zhang. Baidu, which just opened an office in the Seattle area, is putting its full weight behind artificial intelligence and its ability to change countless industries. 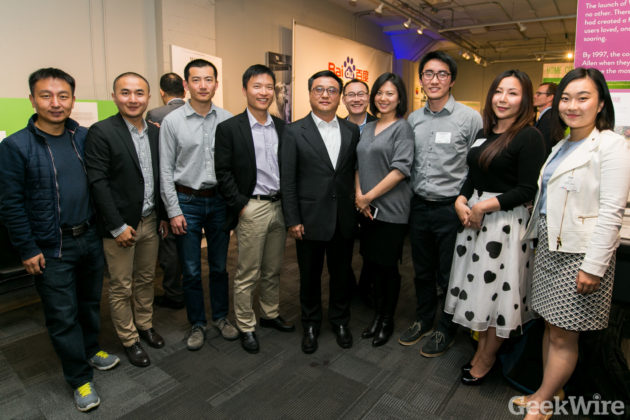 Starbucks CEO Kevin Johnson, a long-time tech industry executive, touched on a number of topics related to the Seattle-based coffee giant, from artificial intelligence to store design to digital innovation.

"For the rest of my life, I will only do things that are joyful, with people I love."
Kevin Johnson after melanoma diagnosis #gwsummit

CEO of @Starbucks at #GWSummit: ‘most important thing is the human connection’

9% of all @Starbucks customers order via app. Retail and in-store experiences are changing FAST #GWSummit

Leslie Feinzaig is making me want to fight @POTUS even more. #GWSummit @LeslieFeinzaig Thank you. Now I want to hug you. And work with you.

@LeslieFeinzaig thank you for sharing your #immigrantstory. You are an inspiration to all of us to make #America a better place. #GWSummit

In the race to get driverless cars on the road, expert warns of the need to pump the brakes — for now

Missy Cummings, a professor from Duke and one of the first U.S. Navy female fighter pilots, gave a Power Talk about how artificial intelligence is changing transportation systems, from driverless cars to cargo drones to flying cars.

We announced details about the annual Geeks Give Back campaign, presented by Bank of America. GeekWire helps run the program with the Washington State Opportunity Scholarship, opening doors to a brighter future for today’s youth.

Fred Hutch president Dr. Gary Gilliland discussed the latest innovations in the fight against cancer, and provided an update on his bold prediction that “we will have cures and therapies for most, if not all, human cancers” in the next eight years.

Let’s be the state the brings together cloud,AI and natural language processing to save lives Gary Gilliland @fredhutch #GWSummit

How Amazon’s $13.7B purchase of Whole Foods is a ‘blessing in disguise’ for Instacart

The grocery market is rapidly changing, and Instacart founder and CEO Apoorva Mehta — a former supply chain engineer at Amazon — shared insights on the changing face of grocery shopping and a few entrepreneurial lessons that he’s learned along the way.

“Americans spend 15B hours/yr shopping for groceries. Most…would rather be doing something else." -Instacart’s @apoorva_mehta #GWSummit

.@apoorva_mehta’s lessons on failure: Needs to be a passion: not thinking about it in the shower? don’t do it #GWsummit #startupgrind #vc

How do you succeed in tech? ExtraHop CEO Arif Kareem thinks you must invest in people

It's middle Mgmt which will make or break the company. They need to be trained, empowered and inspired. Arif Kareem @ExtraHop #gwsummit

?Great to hear insight today from the CEO of @extrahop Arif Kareem. #FunFact: This was his first selfie… EVER! #GWSummit pic.twitter.com/tnbFKn0b2b

I want to be like @AGOWA Bob Ferguson when I grow up. #gwsummit #GWS2017

Wise words from Bob Ferguson @AGOWA: "This is not a time in our country to sit on the sidelines. Volunteer. Engage." #GWSummit

Washington State Attorney General Bob Ferguson on whether he has an ax to grind against Donald Trump: “I’m guilty.” #gwsummit

Integrating artificial intelligence chips into our own neural wiring may be the best way to address concerns about the rapid rise of AI, and the potential that the machines could outpace humans, said neuroscientist Christof Koch, chief scientific officer at Seattle’s Allen Institute for Brain Science.

@amazonecho VP Toni Reid: “it’s still too early to say whether #AI feels truly humanlike” (but it is headed in that direction) #GWsummit

"We built it with privacy in mind on day one," @AmazonEcho VP Toni Reid says. "We give customers transparency and control." #gwsummit pic.twitter.com/GKIFiyCHmu

Brad Smith, Microsoft president and Washington State Opportunity Scholarship board chairman, introduced Citlaly Ramirez, a WSOS scholar who spoke about her journey as an immigrant in this first-of-its-kind GeekWire Summit series.

"#WSOS has been a blessing. I am ecstatic Dreamers are allowed to apply, This is the power of removing barriers" Citlaly #Scholar #GWSummit pic.twitter.com/ggD9xwiHio

Will we deport people to countries that they don't even know?
Would be deporting them away from their home.@Microsoft Brad Smith #gwsummit

Women in #VC & #tech insights from panelists: By not having women on your team you will miss out. #theVCview #GWSummit

Great to see a panel of VCs, who are all women, on stage to talk about their investment areas vs being “women in VC”. Kudos #GWSummit pic.twitter.com/4TQNOtou9w

If you’ve purchased anything on Amazon lately, you’ve likely got Jeff Wilke to thank, at least indirectly. As head of Amazon’s consumer business, Wilke oversees a diverse range of businesses in the consumer arena, everything from third party marketplaces to new entertainment offerings to Amazon’s historical roots in book sales. Wilke talked about Amazon’s expansion into brick-and-mortar retail; how the company uses artificial intelligence and robotics in its operations; and Amazon’s plans for HQ2.

“We pay attention to competitors when we can learn something tactically, but we focus on customers” – Jeff Wilke @amazon #gwsummit

#gwsummit Jeff Wilke on HQ2: "I hope we find a city with a focus on STEM education"

Inventions We Love, presented by Sirqul, is a fun geek show-and-tell featuring some of the coolest gadgets and hardware devices we’ve seen. Day 1 included presentations by Pillsy, JikoPower, and SafKan.

Capital One Rooftop Party at Frolik 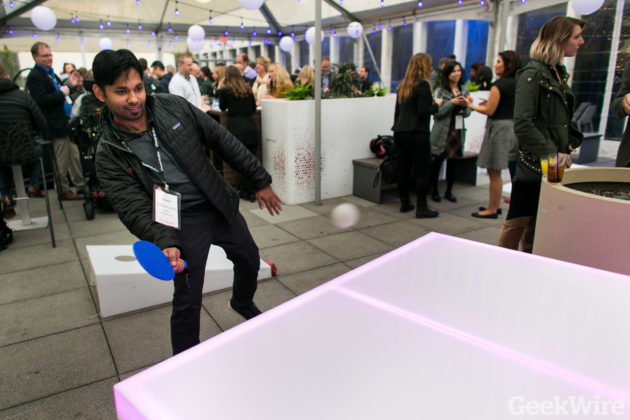 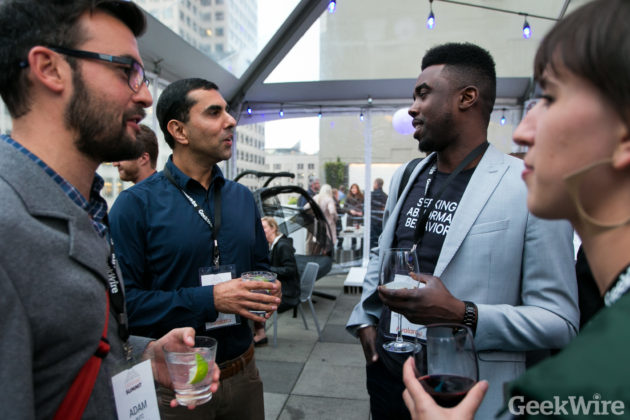 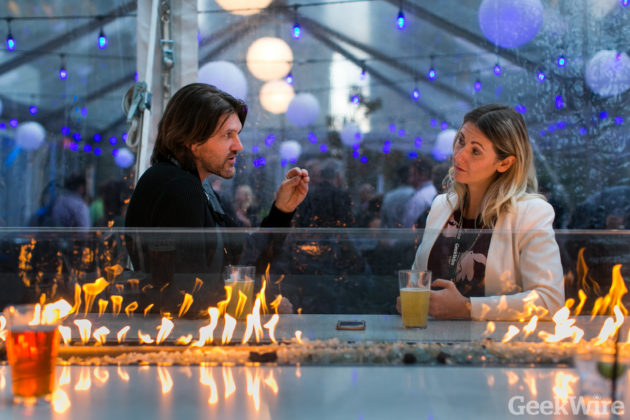 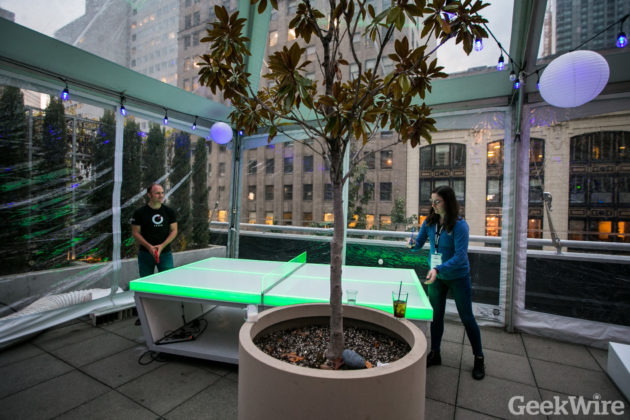 Day 1 also included some geeky entertainment from the talented folks at Seattle Peace Chorus who sang techie remakes of classic songs as part of the newly-formed “Geek Choir.”

After years of getting confused with a geek choir, @geekwire decided to just form one. #GWSummit #geekchoir pic.twitter.com/wF7z7jokNB