My butt has never been so sore.

It was two days after my first electrical muscle stimulation (EMS) session, during which I spent 20 minutes wearing a wireless vest with 16 nodes that buzzed my entire body while I did simple exercise moves.

I know the “good sore” feeling you get after weight-lifting, and this was similar. But instead of pumping iron in a crowded gym, I did some squats, arm raises, and other basic movements while electrical impulses zapped my muscles throughout a short session inside the GeekWire office — a full body workout in just 20 minutes. 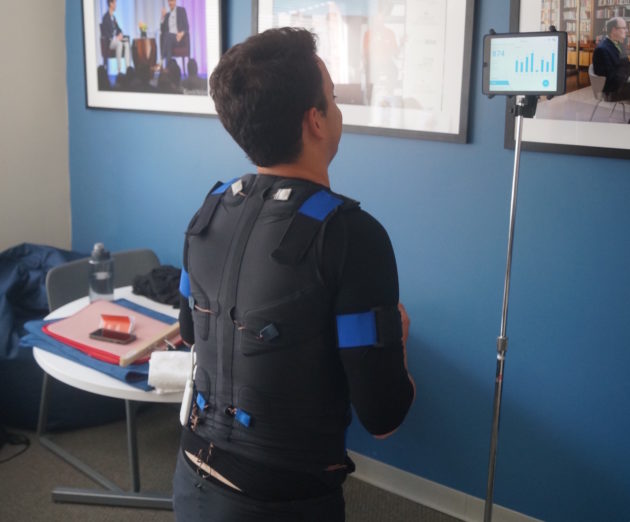 I was introduced to the concept of EMS by Michka Mirzanejad, founder of Body by Impulse, a new EMS studio in Seattle and one of the first on the West Coast.

EMS is not a new concept. The idea of electrical current activating muscles has been around since the 18th century, and it was used by Russian athletes in the 1960s. Bruce Lee apparently added EMS to his exercise regime; this was depicted in the 1993 movie Dragon: The Bruce Lee Story.

Here’s a bit more on how EMS impacts your body, via Body by Impulse website:

Every movement in the body is produced by an electrical impulse sent from the brain to the muscle fibers. In conventional training these electrical signals cause muscle contraction and trigger movement.

Through using this natural principle, EMS is able to intensify the process to reach deeper muscle layers which are hard to activate through conventional training. This is achieved by applying EMS electrodes to the skin directly above the muscle.

Mirzanejad, who grew up in Germany before immigrating to the U.S. in 1991, spent 17 years as a massage therapist before she started learning more about EMS a few years ago. She made a trip back to Germany, where EMS is popular, and purchased a Easy Motion Skin suit.

Now the entrepreneur works with several clients in the Seattle region who strap on the suit and go through 20-minute workouts with Mirzanejad, who conducts sessions — which cost $65 on average — at her Greenlake studio and also inside homes and offices. She controls the strength and location of electrical impulses, which range from 7 Hz to 85 Hz, depending on what each client is comfortable with, and what they are trying to accomplish.

Before we began, Mirzanejad asked me a few precautionary health-related questions, given that the system sends low-frequency electronic impulses into the body. After spraying the suit with water to help your body conduct the impulses, she straps you in and you’re off.

The Easy Motion Skin system works in conjunction with an app; you follow an avatar who demonstrates the different moves while Mirzanejad controls the impulses that go past all three muscle tissue layers.

For my specific workout, I did six seconds of intense impulses while doing a given movement, and rested for four seconds. I didn’t feel fatigued until about the 14-minute mark; the sweat started dripping and continued until 20 minutes were up.

After I completed four sessions, my whole body definitely felt stronger, much like it would after four weight-lifting sessions. But the nice part about EMS is that you don’t put any strain on your joints and it takes just 20 minutes for a full-body workout.

Mirzanejad said that people who do EMS training twice a week for eight weeks can see results that may take up to eight months with traditional weight-lifting in a gym.

“It’s a new way of exercising,” Mirzanejad said. “I call it next-generation training — train smarter, not harder, is my motto.”

However, Dr. Kevin McQuade, a rehabilitation medicine expert at the University of Washington School of Medicine, told GeekWire that EMS does not replace resistive exercise training.

“Bruce Lee did experiment with some EMS, but he did extensive physical training,” McQuade said. “EMS has been used in the U.S. for more than 30 years and it helps people during rehabilitation learn to recruit and activate muscles that have poor recruitment as a result of immobilization, surgery, or disease.” 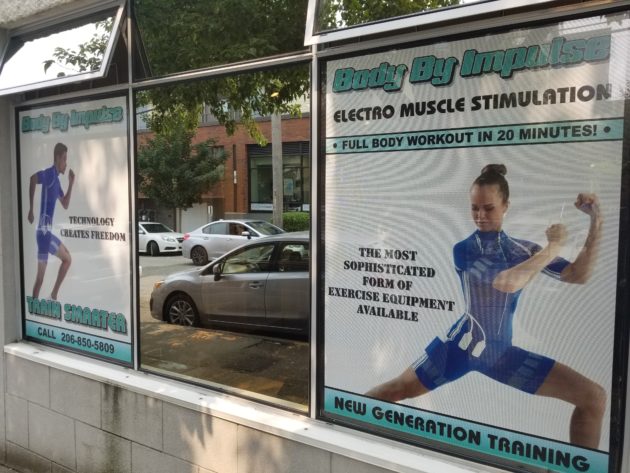 Mirzanejad agreed with McQuade. Her EMS workouts aren’t intended to completely replace resistive training — “I merely enhance your resistance training with EMS to give you a boost in your workout,” she noted.

Her system seems ideal for folks in their 40s or 50s whose metabolism is slowing down and could use that extra “boost.”

Reid Wegley, a 47-year-old program director at Seattle-based PR consultant, is a big believer in EMS training. He worked with Mirzanejad for 10 weeks and noticed all of his “old man pains” in his wrists, elbow, and knee disappear. Weigley, who wrote about his initial experience here, also lost 13 pounds and cited increased strength and flexibility.

“The parents are scrimmaging with the kids on the soccer field today — I’m looking forward to it, whereas before I would have been wary of getting hurt by pulling something,” he told GeekWire.

Marnie Nordling, a 39-year-old entrepreneur and clothing designer, also does EMS training with Mirzanejad and had similar rave reviews. She said her body responded “very quickly to this kind of workout.” Aches and pains lessened, and even migraines that had plagued her for years vanished after a few EMS workouts.

“I’m 39 years old and feel stronger and healthier than when I was in my twenties,” Nordling noted.

It remains to be seen whether EMS training becomes more popular in the U.S. The idea of high-intensity training is catching on, particularly as people get more busy and have less time to work out.

Mirzanejad said EMS studios are all over Germany, while people in Japan, Brazil, and Russia also use it frequently. I noticed something similar at a TechCrunch Disrupt conference last year with U-Gym‘s vibrating patches.

There does seem to be a lack of concrete research about the fitness benefits or potential downsides of EMS, at least in the U.S. Mirzanejad does not make any claims — “I’m just promoting wellness,” she said, which was also evident after she gave me homemade vegetable broth to help heal my gut and told me about a 30-hour Qi Revolution event she recently attended.

I enjoyed my EMS training. My body felt energized immediately afterward, and I prefer it over traditional weight-lifting. The one issue for me is the cost — doing two sessions per week can get a little pricey. But for older folks who want to regain some of the muscle strength and overall health they enjoyed years ago, it may be worth giving these high-tech workouts a try.