BELLEVUE, Wash. — Did you ever try inflating bread dough with a bicycle pump? Gourmet technologist Nathan Myhrvold did — and after thumbing through the 2,642 pages of his latest opus, “Modernist Bread,” you just might, too.

Like “Modernist Cuisine,” his earlier work, the new five-volume set of books is bigger than a bread box and costs hundreds of dollars. But although “Modernist Bread” offers hundreds of recipes, these are no common cookbooks: Myhrvold and his co-author, head chef Francisco Migoya, delve into the history of one of the world’s oldest foods, the science and technology of breadmaking, and why stunts like pumping up bread actually work.

“Some people ask me how I could possibly make a 2,600-page book on bread,” Myhrvold told GeekWire, “My answer is, ‘Because I had to hold the line somewhere.’ Seriously, we had lots of material that we had to cut.”

Myhrvold and Migoya manage to deflate a few myths along the way. Some examples: The need to knead bread is a fraud. Some of the “rustic” bread techniques in vogue today aren’t rustic at all, but were invented over the past 40 years or so. And there’s no such thing as true rye bread in America.

“How come it took till the 21st century for us to figure this out?” Myhrvold asked.

That’s the sort of question Myhrvold asks about a lot of things, ranging from how many Earth-threatening asteroids are out there to how fast a dinosaur could whip its tail. His eagerness to test conventional wisdom held him in good stead as a physicist under the tutelage of Stephen Hawking at Cambridge University, as chief strategist and chief technology officer at Microsoft in its early days, and as the co-founder and CEO of Bellevue-based Intellectual Ventures.

Myhrvold’s fortune, which is thought to amount to hundreds of millions of dollars, gives him the freedom to explore the art and science of cooking.

Sometimes it’s just a case of rediscovering what someone else already figured out. For example, bakers had put out formulas for “no-knead bread” going back decades, but the experiments that Myhrvold and his team conducted in their Bellevue lab figured out more precisely how dough could do what it needed to do without kneading.

And it wasn’t until Myhrvold played host to Austrian bakers that he learned why American rye bread pales in comparison to the real thing from Europe. Spoiler alert: It’s usually just rye-flavored wheat bread, containing as little as 4 percent rye.

True rye flour is gluten-free, and it has to be finely milled to make a nice, fluffy loaf. The closest U.S. product comes from Oregon-based Bob’s Red Mill, Myhrvold said.

To test the recipes, and to advance the frontier of baking technology, Myhrvold, Migoya and the team’s other bakers took advantage of a state-of-the-art Cooking Lab set up within Intellectual Ventures’ Bellevue laboratory.

“We have a lot of lab equipment that was repurposed for cooking,” Migoya told GeekWire during a tour.

There’s a rotary evaporator that’s typically used to remove solvents from chemical mixtures, a cryogenic freeze-dryer, a spray dryer, a proofer-retarder, a rotor-stator homogenizer and other gadgets that look as if they’d be at home in Dr. Frankenstein’s lab.

But there’s also an oven that looks as if it came from a college dorm.

“It’s this rinky-dink oven,” Migoya said. “We do a lot of testing in there because we want people who have rinky-dink ovens to do the food that we make. … In fact, some of our best-looking loaves came out of this home oven.” 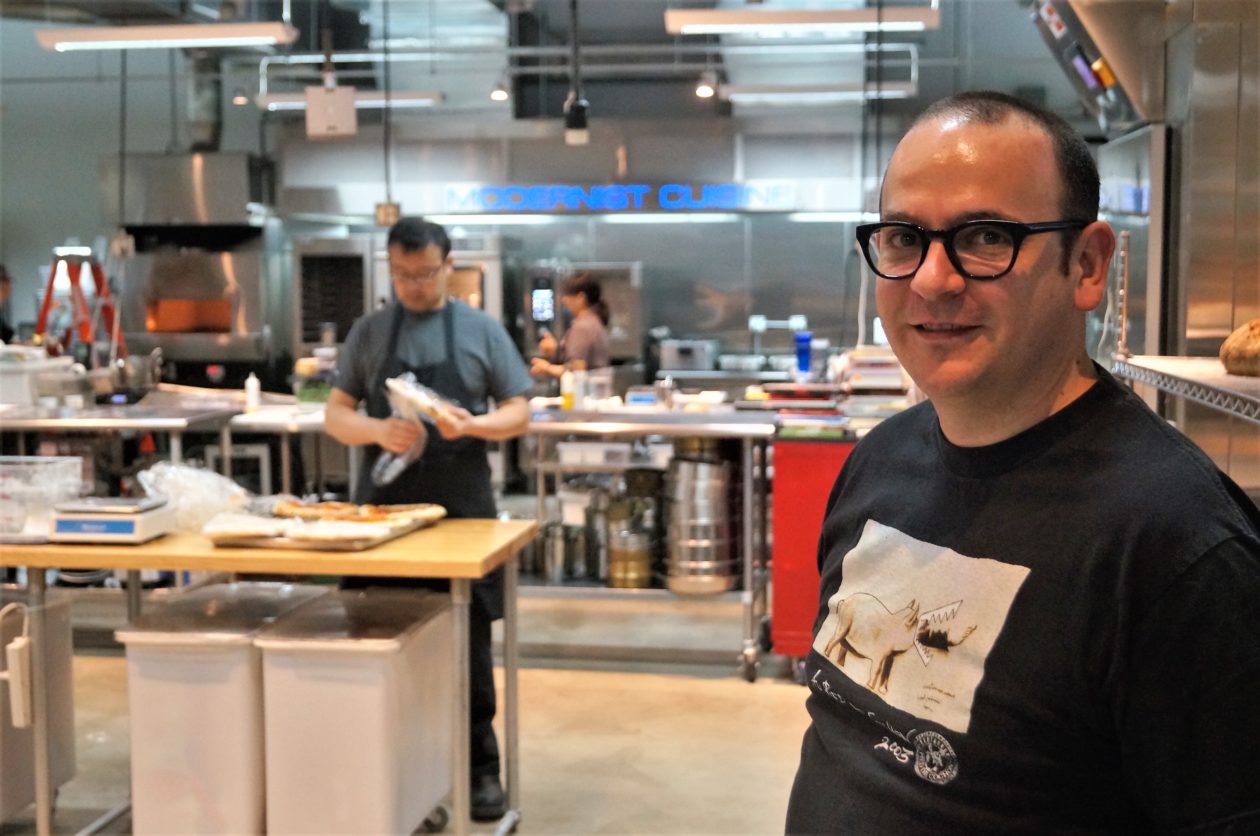 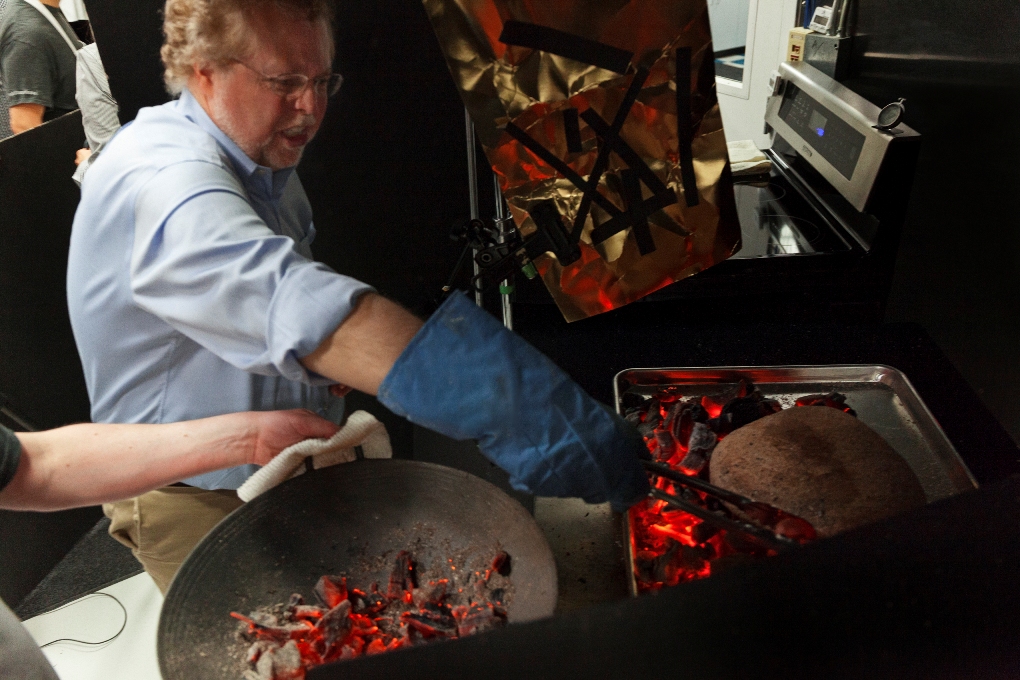 Nathan Myhrvold grimaces as he works with a loaf of bread on hot coals. (The Cooking Lab, LLC) 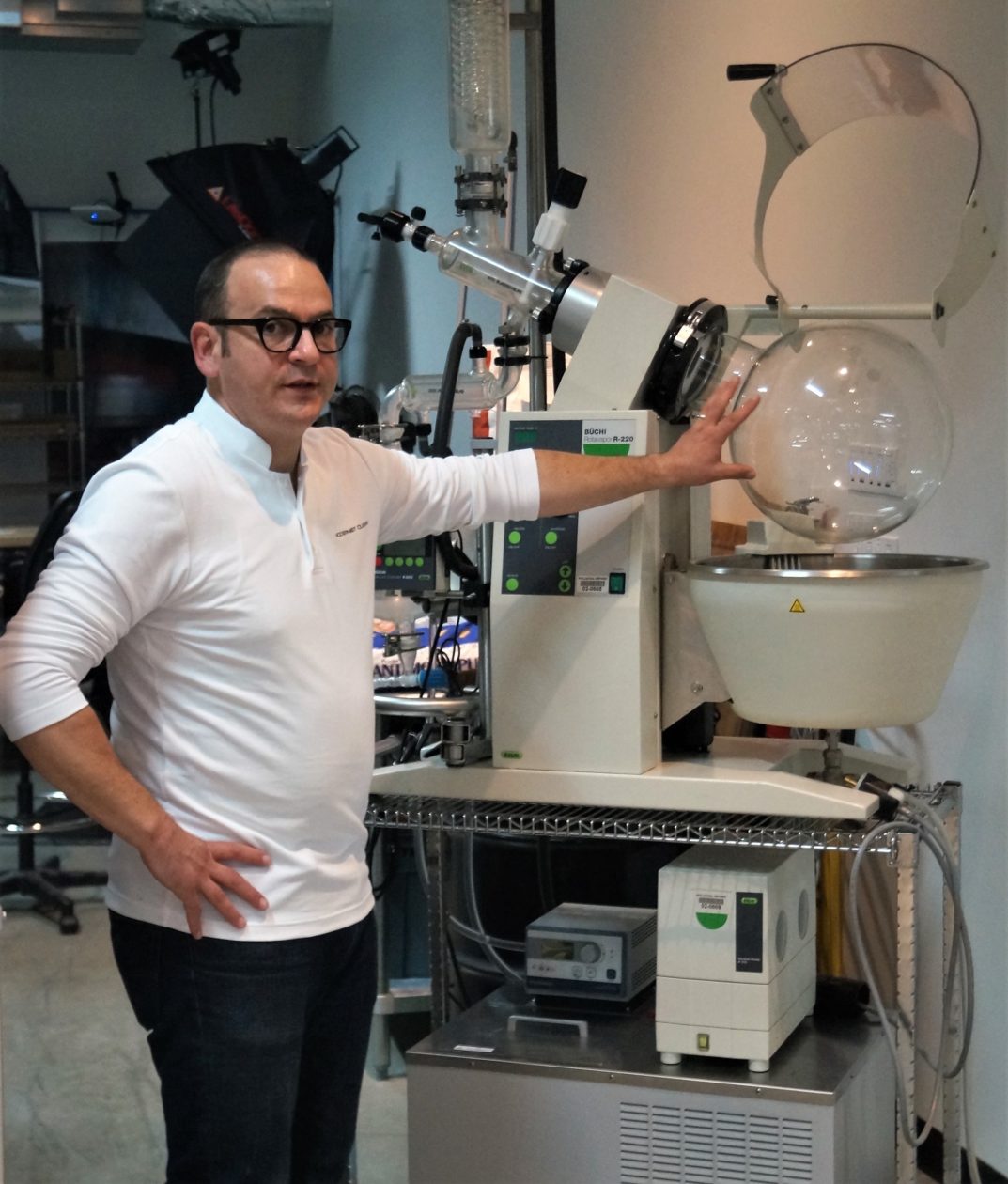 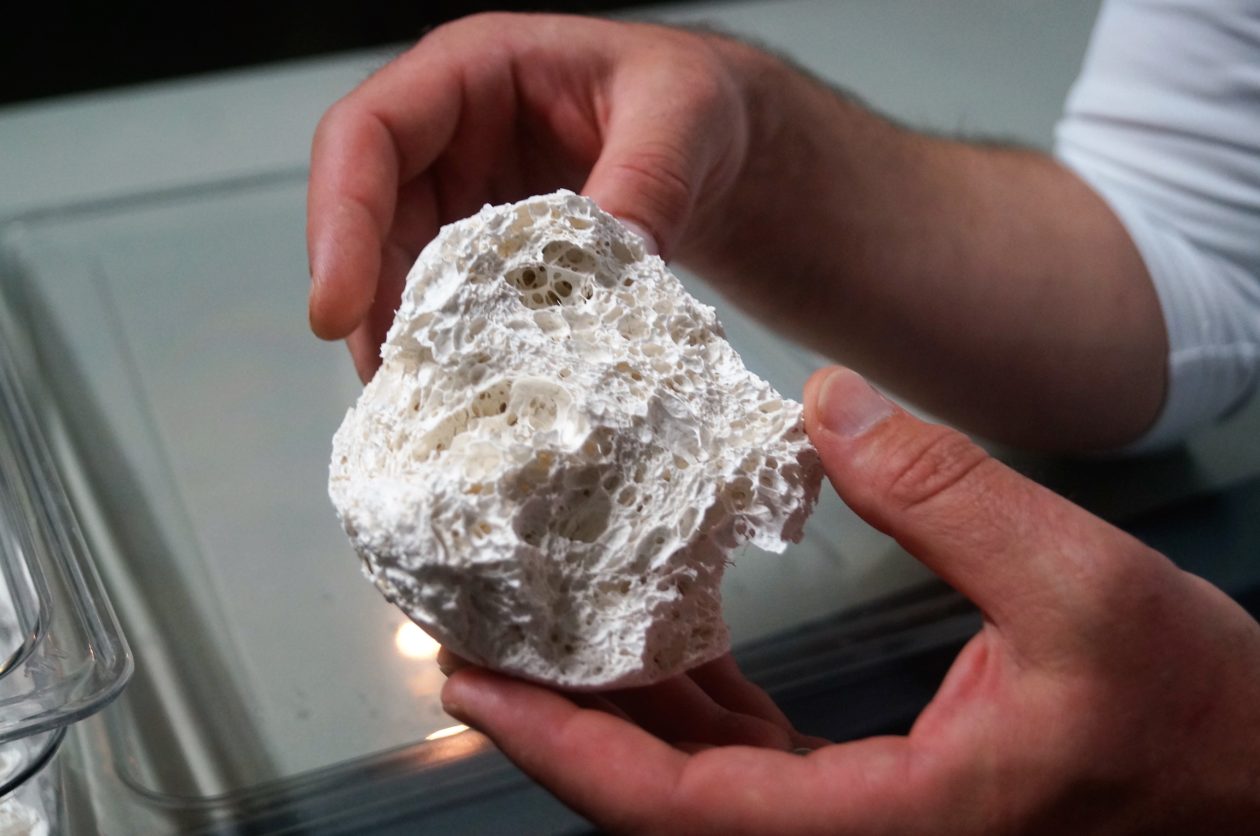 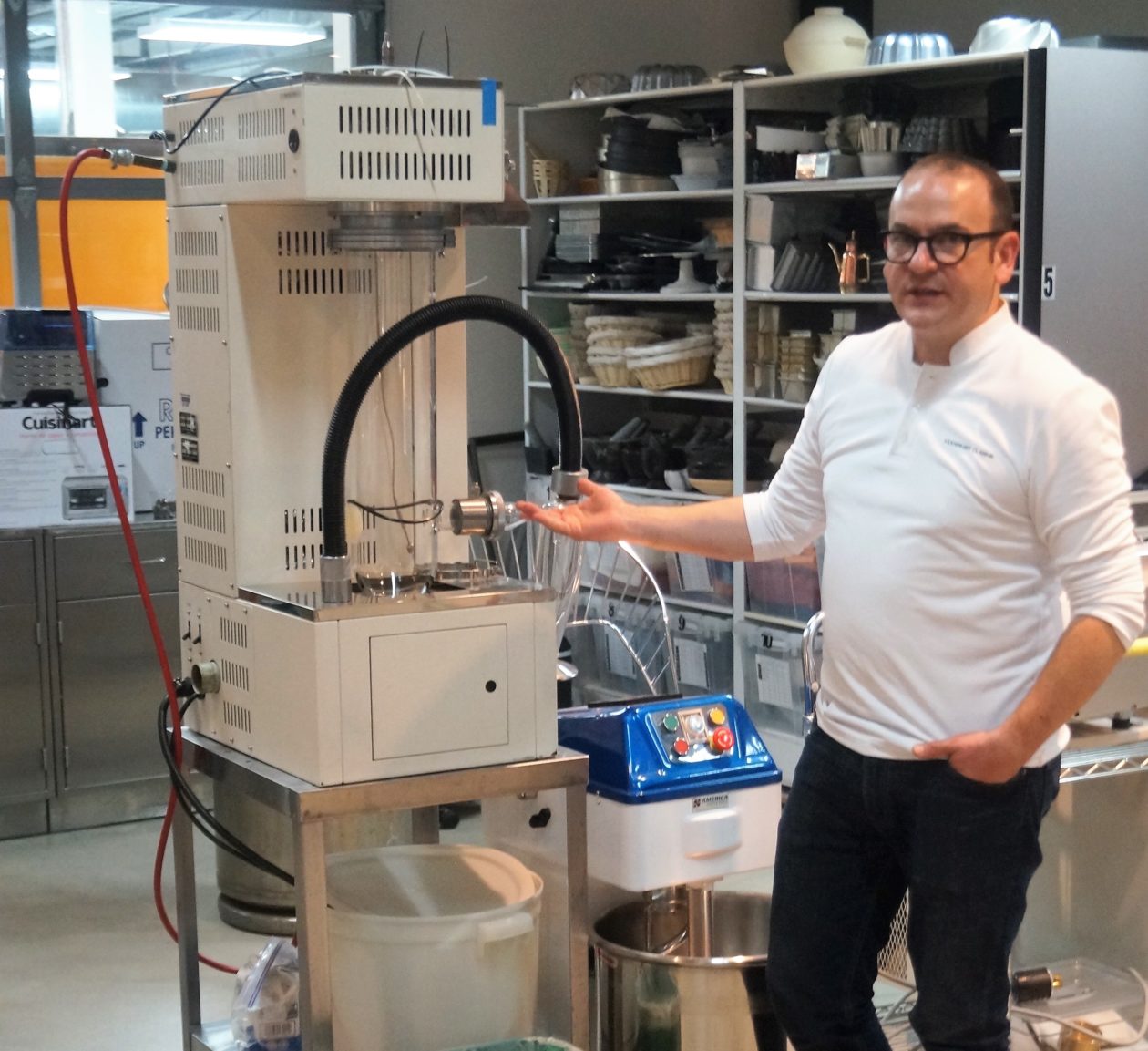 The Cooking Lab’s spray dryer can turn apple juice into a powder to sprinkle over pastry. (GeekWire Photo / Alan Boyle) 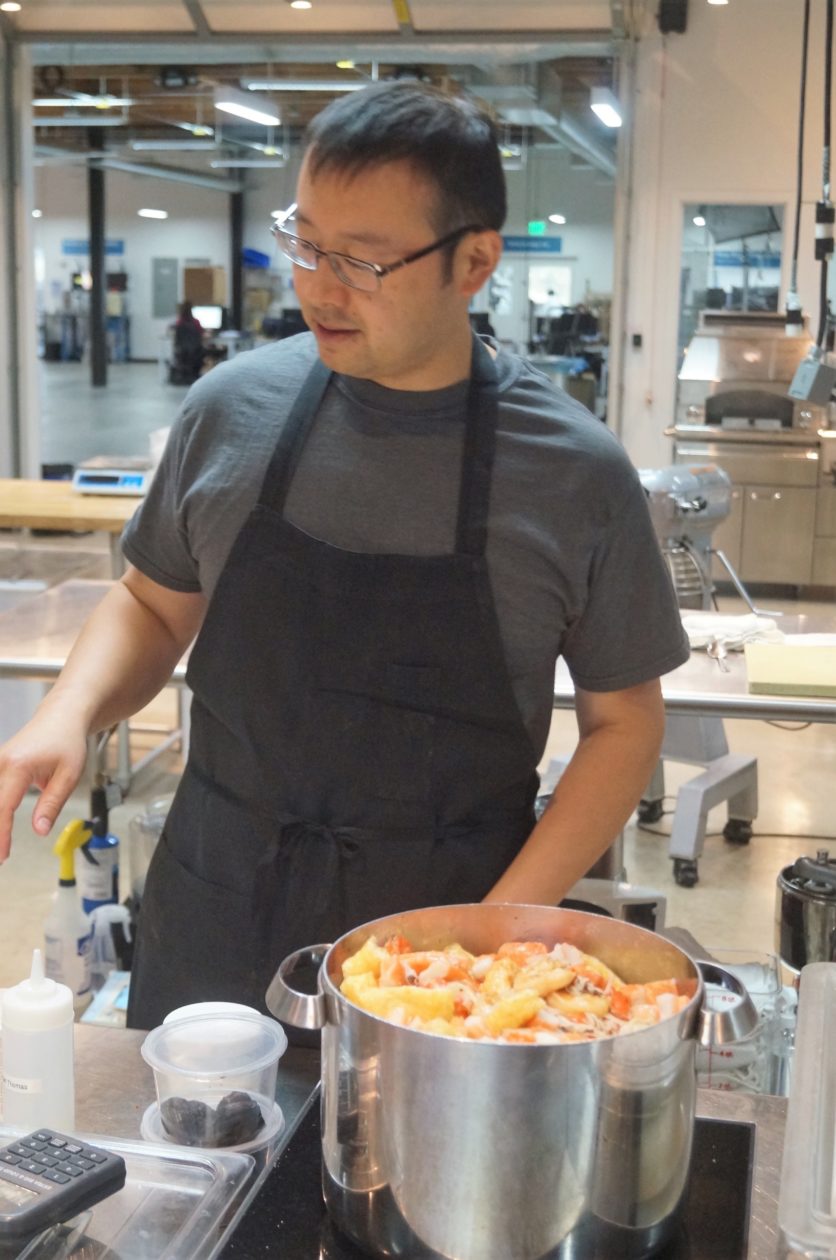 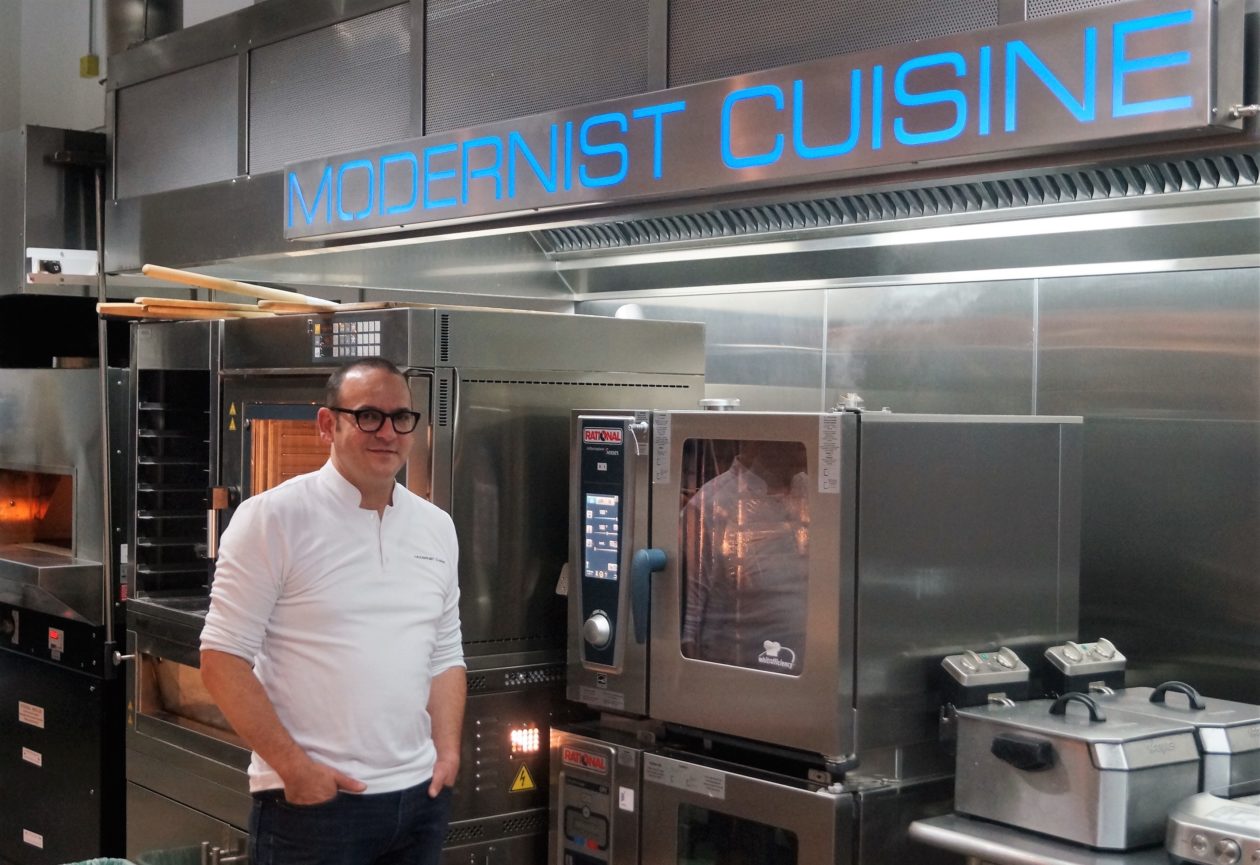 The Modernist Cuisine Cooking Lab’s chefs can use a wide array of ovens for baking and cooking. (GeekWire Photo / Alan Boyle)

Another type of oven was used to recreate the bread loaves that are depicted on 2,000-year-old murals in Roman Pompeii. To add verisimilitude to the exercise, Myrhvold had lab employees dress up in Roman costumes for a photo, and bought an authentic (and rather expensive) Roman-era bread stamp to mark the loaves.

“The antiquarian dealer was horrified, of course. … I can’t tell you, ‘Ah, yes, our sales will be 22 percent higher because we recreated the Pompeiian mural,’ but it does sort of speak to how crazy and carried away we get on some things,” Myhrvold said.

The lab doesn’t just recreate old recipes: The Modernist Bread team delves into innovations on the frontiers of baking.

There’s that pumped-up bread, for example: When air is injected into the dough, using a basting syringe or even a bicycle pump, that leads to bigger holes in the baked bread — making for a different taste experience. The team went so far as to build a bubble-blowing machine for bread dough.

“It creates these hollow spheres of bread,” Myhrvold explained. “Imagine a balloon with the outside shell made of something like phyllo dough.”

The meaning of modernist baking

Advancing the state of food technology is what the “modernist” in “Modernist Bread” is all about.

“Historically speaking, this notion that the best bread was in the past is just wrong. … That fabled golden age of bread never really existed,” Myhrvold said. “That’s the first thing. The other thing is, it’s very stultifying if you think that the best stuff happened only in the distant past, and if you think all we can do is struggle to re-attain to what once occurred.”

Six years ago, “Modernist Cuisine” documented the innovations that forward-thinking chefs were bringing to the age-old craft of cooking. This time around, Myhrvold is on a different mission.

“Rather than documenting a movement, what we do is we document the undercover stirrings of all of these things, and try to get the whole baking world to say, ‘Hey, you can have a model for high quality that doesn’t mean you’re copying the past. It’s OK to innovate. It’s OK to come up with new ideas.’ Science and technology is not bad. Science and technology is how the world works.”

Myhrvold is among the inventors listed on a patent for making crisper french fries by soaking them in a special solution and subjecting them to ultrasound. Now his work on “Modernist Bread” might spawn another patent.

“Very late in the process, someone I know who’s got celiac disease and knew that we made gluten-free things said, ‘You know, I would kill for a gluten-free bagel,'” he recalled.

At first, Myhrvold was skeptical. He listed all the reasons why it’s impossible to make a true bagel using gluten-free flour.

“Then, a couple of days later, it occurred to me, ‘Hey, we should try this one thing.’ And by God, it worked,” he said. “We have a gluten-free bagel that’s actually good.”

Is it possible to patent and commercialize that bagel? “It may be,” Myhrvold replied. “We’re looking at it.”

“Modernist Bread: The Art and Science” can be pre-ordered now for delivery after the Nov. 7 publication date. Myhrvold will talk about modernist breadmaking during a Town Hall Seattle presentation at the SIFF Cinema Egyptian Theater on Oct. 26. It’s part of a culinary doubleheader with Rachel Yang and Jess Thomson, co-authors of “My Rice Bowl: Korean Cooking Outside the Lines.”