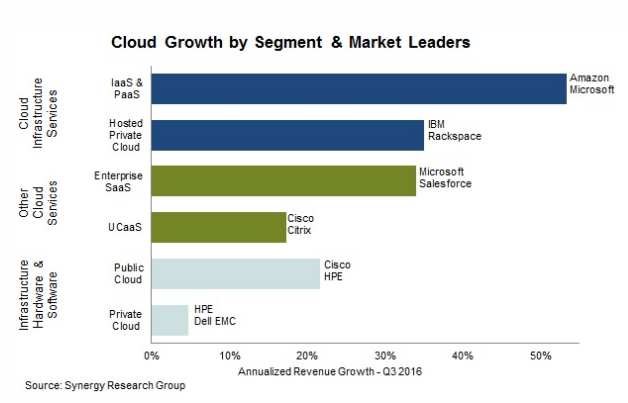 The year 2016 was the first in which cloud computing started to dominate many IT market segments, with cloud revenue for the four quarters ended Sept. 30 growing 25 percent year over year, according to just-released numbers from Synergy Research Group.

Operator and vendor revenue for six segments of cloud computing reached $148 billion during that period, with spending on private clouds accounting for over half the total but spending on the public cloud growing much more rapidly.

“Major barriers to cloud adoption are now almost a thing of the past, especially on the public-cloud side,” said Synergy Research Group founder and chief analyst Jeremy Duke in a release. “Cloud technologies are now generating massive revenues for technology vendors and cloud service providers, and yet there are still many years of strong growth ahead.”

Among the six segments studied, revenue from infrastructure as a service and platform as a service grew 53 percent year over year, led by Amazon Web Services and Microsoft Azure. AWS originated the concept of cloud computing 10 years ago and is on target to generate revenue of $13 billion in 2016. Azure, its major competitor, is growing strongly.

Revenue from hosted private cloud (led by IBM and Rackspace) and enterprise software as a service (led by Microsoft and Salesforce) each showed roughly 35 percent growth.