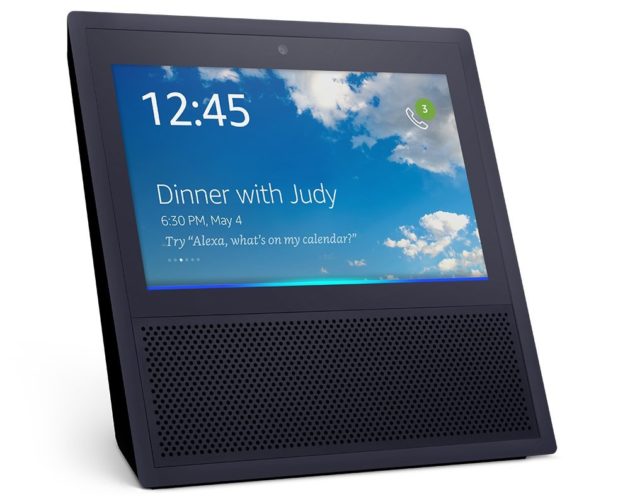 Amazon this morning made two major upgrades to its Echo lineup: a new $230 device called the Echo Show, with a seven-inch touch-screen; and a free Alexa voice-calling and messaging feature that will be available on the new device, Amazon’s existing Echo and Echo Dot, and the Alexa smartphone app.

The Echo Show will give users the ability to watch video briefings, YouTube videos, and see content from apps including weather, lyrics, security cameras, and to-do lists, using voice commands. It comes with the features of existing Echo devices, and works in conjunction with a variety of smart home devices services, for controlling lights, thermostat and other aspects of a home.

Echo Show is slated for release on June 28 and available for pre-order starting today.

Amazon says the free Alexa calling and messaging features are rolling out starting this morning to existing Echo and Echo Dot devices in the U.S., and the Alexa app for iOS and Android. It will let people talk with and leave messages for other Echo and Alexa users.

Under the hood of the new device are a pair of Dolby speakers, as well as an eight-microphone array — one more than the original Echo speaker.

Amazon is looking to strengthen its position in the competitive voice assistant market with more Alexa-powered devices. Amazon last month introduced Echo Look, a $200 device that has all the same capabilities as Echo speakers and lets people use their voice to take full-length pictures and videos of themselves with a depth-sensing camera and computer-generated background blur. Amazon then stores those snapshots via a companion app and can provide fashion recommendations with a “Style Check” service that uses machine learning algorithms and advice from fashion specialists.

Alexa’s capabilities have grown rapidly, to more than 12,000 skills, thanks partially to its decision to open up the digital brain to third-party developers. Amazon went a step further last month when it opened up what amounts to Alexa’s ears, her 7-Mic Voice Processing Technology, to third party hardware makers who want to build Alexa-powered devices.

These are the latest efforts by Amazon to upgrade its Echo hardware and Alexa voice assistant in the face of new competition from Google, Microsoft and other tech companies. A recent study from eMarketer found Amazon captures approximately 71 percent of the 35.6 million people who use a digital assistant at least once a month. That is far ahead of Google, which accounts for about 24 percent of users.

A recent study estimated that Amazon has sold more than 10 million Alexa-powered devices, with close to half of that production coming in the last six months.